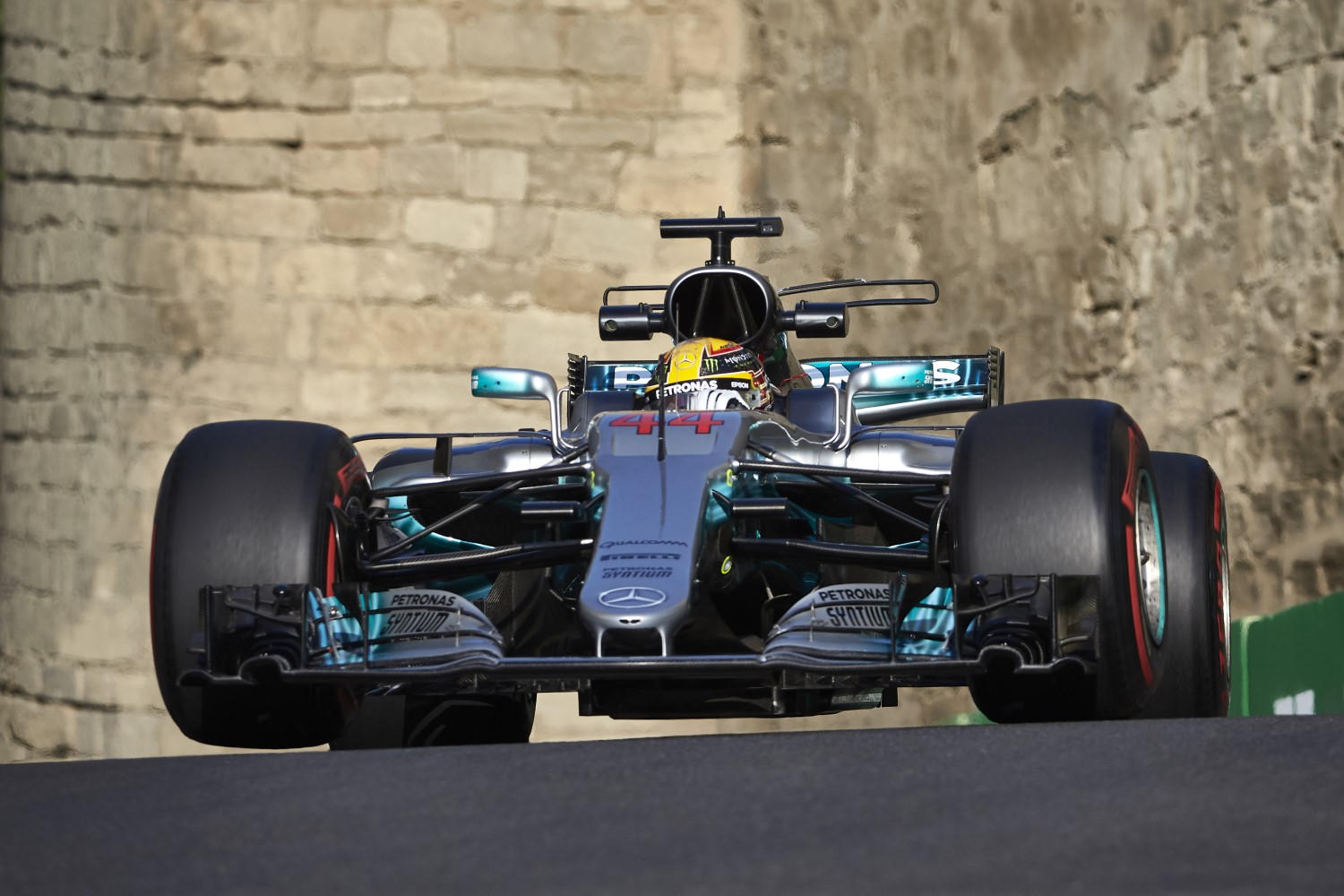 How superior is the Costa car? The Ferraris on row two were both over 1-second per lap slower. In other words, no one has a chance against the Costa machines and Sunday should be another boring Mercedes 1-2 parade at the front.

Vettel (4th fastest) did have a problem with his engine in morning practice and was running an older, less powerful engine in his Ferrari for qualifying.

Max Verstappen rounded out the top-5 for Red Bull and it will be interesting to see which Ferrari he takes out on lap 1 on Sunday.

His Red Bull teammate Daniel Ricciardo clouted the Turn 6 concrete wall and brought out the red flag with his left rear suspension broken. As a result he could not improve his time and ended up 10th – slowest in Q3.

For Hamilton it was his 66th career pole, moving him one ahead of Ayrton Senna and just three short of surpassing Michael Schumacher's record of 68, which of course he will do this year because the Aldo Costa car is so superior.

Lance Stroll nipped his Williams teammate to take 8th on the grid. It was the first time Stroll was able to beat Massa in qualifying this year.

If not for the superior Mercedes, there were some incredibly close margins within the top 10:

Both McLarens will start from the rear of the field on Sunday thanks to multiple grid penalties for use of additional Honda power unit elements.

Lewis Hamilton
My pole lap in Montreal was pretty special, but I think this one here tops that. My first run in Q3 was actually really good, but I was a bit greedy into the last corner, locked up and cost myself time. After the red flag, there was a lot of pressure on that final lap. All weekend we've struggled to switch the car on over a single lap, but it was an all or nothing moment so I just gave it everything I had. Valtteri was on a great lap as well, so when I came across the line and saw that I had pole, it was such a good feeling. Even if that time had only been enough for P2 it was a lap to be proud of. We were struggling yesterday but we made a lot of changes overnight. A big thank you to the team who stayed late last night to get the car to where it is today – they did a fantastic job.

Valtteri Bottas
It's disappointing to lose pole as that was the target today. It was looking good before the late red flag, but Lewis produced a great lap and mine just wasn't good enough. That final run in Q3 was the first time we had tried to do a flying lap on the first lap, because of the temperatures, and I couldn't get them to work as well as Lewis did – I just couldn't find that grip out there. But what I'm most proud of today is the huge effort the team put in overnight to switch on the car. We were quite lost on Friday but we made some changes and turned the weekend around. Going into the race we have a fantastic starting position and I'm expecting a good fight with Lewis.

Toto Wolff
This is a fantastic qualifying performance after a tricky start to the weekend yesterday. The team did some great work overnight to put the car right in the sweet spot – and both drivers put in a strong performance. We had planned to do one long run in Q3, because that looked like the best way to get the maximum from the tyres, so the pressure was really on after the red flag with just one timed lap possible. That was the big pressure moment and both guys delivered – Valtteri found a quarter of a second then Lewis produced one of those hammer laps to take pole. Tomorrow, though, is another story again. The race pace is a bit of an unknown after some scrappy sessions yesterday, but we are in the best starting positions. Now we need to make a clean getaway then make the most of our opportunities in the race.

James Allison, Technical Director
A diva our car might be but the engineering team and drivers are gradually learning how to talk to her. This was a pretty impressive performance with both cars, and especially the performance on the last run, when we were able to set a competitive time on the first lap using tyres which have been tricky to warm up sufficiently during the rest of the weekend. This is not an easy track, and it has not been an easy weekend so far, but today's result is a good indication of the steady progress we have made through each session. We will be aiming to build on that tomorrow.