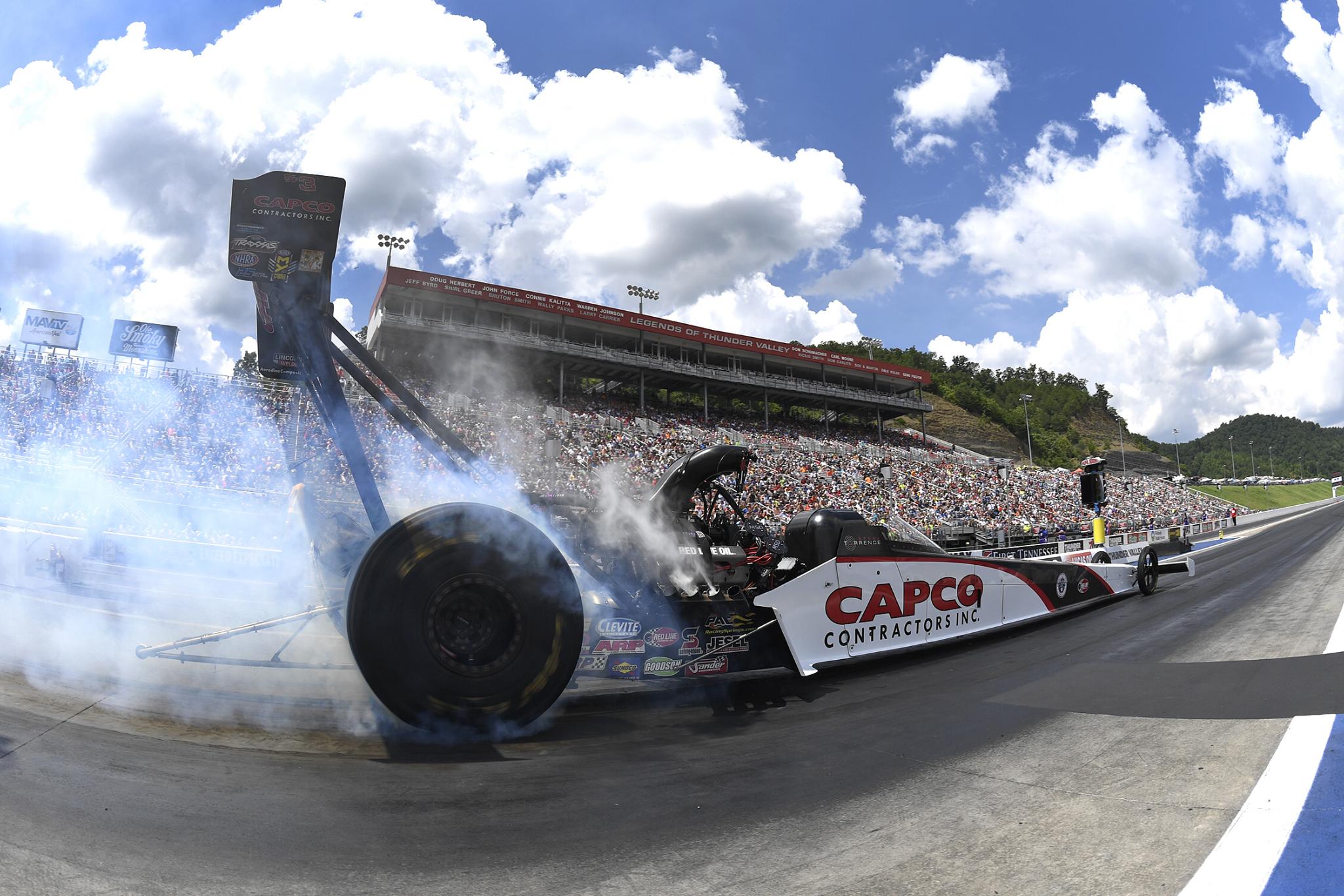 Tim Wilkerson (Funny Car) and Jeg Coughlin Jr. (Pro Stock) were also No. 1 qualifiers in their respective categories at the 11th event of 24 on the 2017 NHRA Mello Yello Drag Racing Series schedule.

Torrence's pass of 3.772-seconds at 319.29 mph in his Capco Contractors dragster during the fourth qualifying session secured his second No. 1 qualifier of the season and 15th of his career.

"It's been a really tricky weekend," Torrence stated. "I think it will be a driver's race tomorrow. I feel like we're going to have to go out and earn the round wins and if you make it to the final you're going to have to work hard. These 11,000 horsepower beasts don't want to go down hot tracks and it takes a lot of finesse from crew chiefs and drivers have to be on their job."

Torrence will square up against Chris Karamesines in the first round of eliminations Sunday afternoon.

Wilkerson sits atop the Funny Car class with his pass of 3.895 at 328.22 from Friday night in his Levi, Ray & Shoup Ford Shelby Mustang. This is his first No. 1 qualifier of the season and 19th of his career.

"It'll be an interesting day tomorrow," Wilkerson said. "This place is really trying. Don't think you've heard one crew chief say, ‘Wow. This is the easiest thing in the world.' I'm very optimistic of how we can run tomorrow. I told my guys I hope I've got them worn out by the time four o'clock rolls around tomorrow."

Wilkerson will face Bob Bode at the starting line in the first round.

Robert Hight qualified second in his Auto Club of Southern California Chevy Camaro SS with a pass of 3.918 at 324.28. Matt Hagan ran a time of 3.925 at 326.00 in his Sandvik Coromant Dodge Charger R/T to qualify third.

In Pro Stock, Coughlin's pass of 6.694 at 204.85 in his JEGS.com / Elite Performance Chevy Camaro from Friday stood strong through Saturday to clench his third No. 1 qualifier of the season and 23rd of his career.

"It feels great to stay on the pole after Friday night's run," Coughlin said. "Couldn't be more proud of the entire JEGS.com team; they've been really thrashing. We'd love nothing more than to turn this green hat into a yellow hat with our first race win this season."

Bo Butner is seeded second with a pass of 6.697 at 205.72 in his Jim Butner's Auto Chevy Camaro. Two-time world champion Erica Enders ran a 6.704 at 205.66 to qualify third in her Elite Performance Chevy Camaro.

First round of eliminations are slated to begin at noon on Sunday at Bristol Dragway. Catch the action at 6:30 p.m. ET on FOX Sports 1 (FS1).