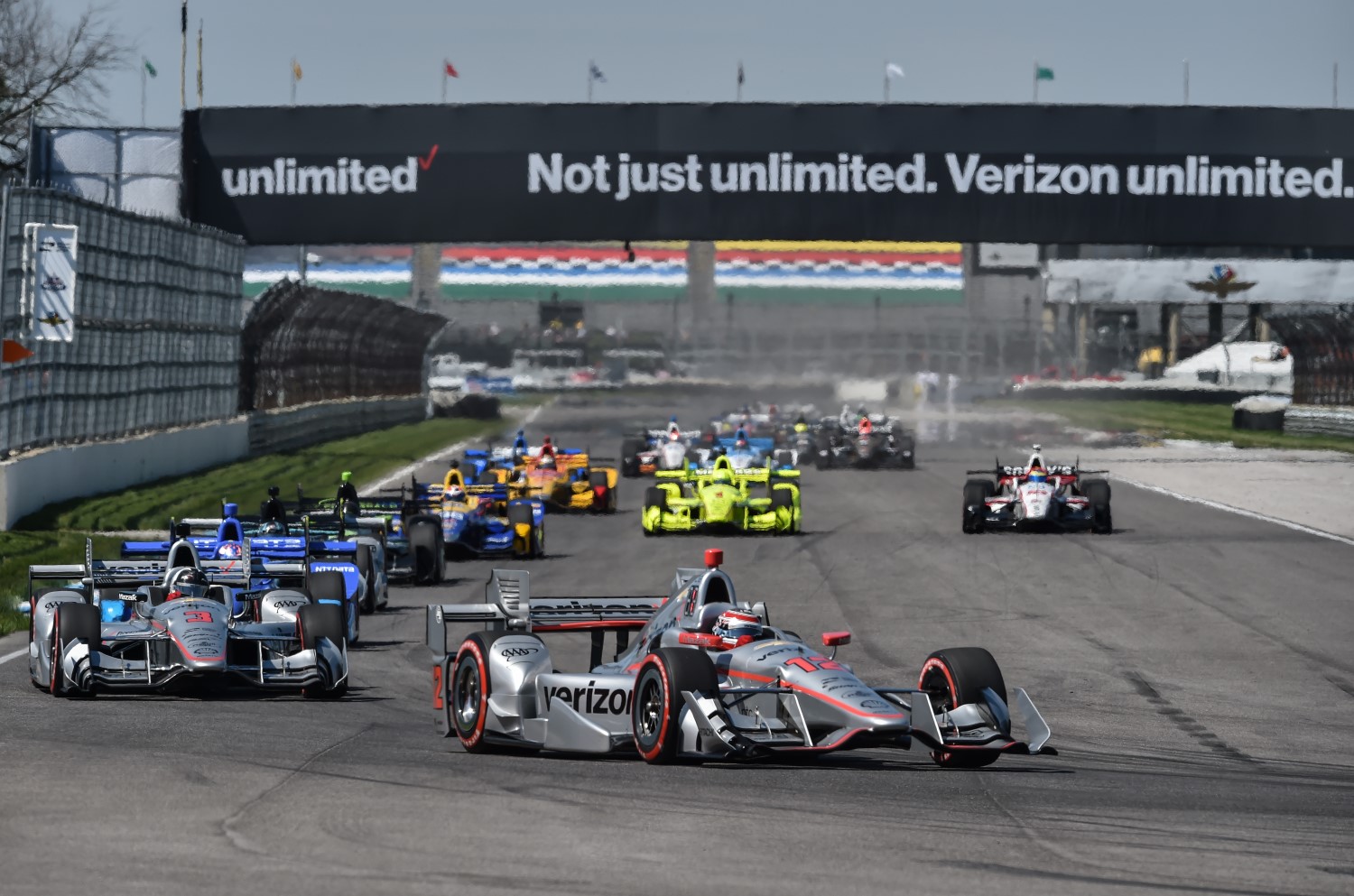 If you take pleasure in the triumph of the little guy then you surely enjoyed the opening two rounds of the 2017 Verizon IndyCar Series. While I wouldn’t exactly refer to Sebastien Bourdais and James Hinchcliffe as little guys, their teams had not won in more than 2 seasons before St. Pete and Long Beach respectively. Further, those somewhat surprising wins served notice that Honda – despite its struggles in recent seasons – would have something to say about the rewarding of the Astor Cup.

Of course, nothing lasts forever, and whether we’ve witnessed a reversion to the mean or the awakening of a sleeping giant, its looks as though those signature striped oxfords from the Dale Coyne Collection and separate-colored Go/Stop racing shoes will need to go back into storage for the time being; because the last three races have been all about medium-starched stiff-collared shirts, closely cropped hair, perfectly-perfectly black pants and clinical, relatively speaking emotion-free dominance race wins from the winning machine that is Team Penske.

And if we take a closer look at the Penske operation from not only this weekend’s INDYCAR Grand Prix but over the last three races, it has been – even with respect to their lofty standards – a monumentally impressive stretch.

[adinserter name="GOOGLE AD"]Of course, the team has won each of those races with Josef Newgarden winning at Barber, Simon Pagenaud winning Phoenix and Will Power winning Sunday. Additionally, the team has won each pole (Power at Barber and Indy, Castroneves at Phoenix). Power and Castroneves also won the pole positions at St. Pete (Power) and Long Beach (Castroneves) and those two have been on the front row in some combination the last three races. Also, in the last three races, only 4 non-Penske drivers have earned a top-5 starting spot.

As for the races, well, it’s been about as much Penske dominance. For one, in the 425 laps over the last three races, a Penske car has led all but 14 of those laps. The team has earned five podiums and at both Barber and Indy were in the position for more. Remember, Power had a failing tire at Barber, which forced him to surrender the lead to Newgarden. At Indy, Castroneves’ less than optimal pit strategy (again, but that’s a whole other story) cost him a shot at perhaps the win, but certainly a podium. Newgarden was also in position to podium before a bizarre three consecutive pit speed limit violations cost him.

So, get this: while Penske has been dominant, they arguably haven’t maximized their current form. Yes, this dominance they’re displaying could have very well been more prolific. Scary proposition.

Simply put, Team Penske is firing on if not all, then certainly most cylinders right now. The one driver that hasn’t won (Castroneves) has certainly been in position to capture numerous wins and will likely breakthrough soon. Also, when you consider that they are essentially the only top-flight Chevrolet team and 4 cars of a 21-car field, there is a good chance this dominance continues.

So, is there any bad news for Team Penske?

It would be hard to really criticize Penske for anything so far in 2017. However, they can’t be comfortable with the fact that after all this early-season success Team Penske’s Greatest Nemesis Scott Dixon and Chip Ganassi Racing sit a mere 10 points behind championship leader Pagenaud. We all know Dixon and Ganassi do their best work in the middle to late part of the season. With five top-5 finishes, the cool, calculating Kiwi has weathered the Penske storm, and like a hungry tiger lying in the weeds, we have to assume Dixon and Ganassi will make their presence known sometime soon.

I'll admit: when the Grand Prix of Indianapolis was first announced I was as on-board with the idea as anyone. I believed a race on the-then mostly sitting idle former Formula One road course made much more sense as a way to kickoff Indy car racing’s most important month than the teams wasting time and precious resources droning around the oval before a crowd of dozens. Throw in the fact that with the Grand Prix IMS got ABC/ESPN at the Speedway for the entire month of May, and that all rungs of the Mazda Road to Indy would be able to race at the sport’s most hallowed ground mean the Grand Prix of Indianapolis – again, in my mind – just made too much sense.

Granted, I’m not sitting here saying the event should be shelved. Also, I don’t know what the gate receipts are, nor I am aware what sort of local momentum the Grand Prix creates for the 500, something that is certainly a consideration.

That said, something that I was rather ‘Gung-Ho’ about initially, has certainly been dampened to a degree. Acknowledging that a crowd of even 100,000 at IMS may look sparse, having a race in what appears to be an empty house just isn’t a good look, particularly when you consider the series uses one of its oh-so-precious network television slots to air the race. And while people will say that anything at IMS is good, to me, the event has taken on the feel of a high school football game at an NFL stadium. Yes, the arena is plush and rich in history, but the aesthetics don’t match.

To be clear, this isn’t a criticism of management. No one expects IMS to pack the house for the Grand Prix two weeks before the 500; and again no one was as on-board as me when the Indy GP was first announced. I just think it’s taken four races to drive home the shortcomings of the event, which aren’t going away anytime soon. While you hate to not put the road course to use, if there is going to be a second race at Indy, the better option remains Mark Cipolloni’s proposal of a 400-miler on the oval to end the season.

I’ll concede that what follows is not the biggest problem in the world. Further, I don’t believe there was any gross incompetence or negligence, so don’t think I’m taking anyone to the woodshed here. But if you are like me and believe that little things matter this is something I see far too often in racing, and believe can be easily corrected.

To begin, I think we can agree that someone who invests emotionally, financially and/or otherwise in a racing series doesn’t need to know everything that happens, but is entitled to some basic clarity from the series and teams as to what takes place on the race track. We’d also probably agree that said clarity can only exist when there is clarity amongst the parties mentioned above in disseminating the message.

Well, this weekend the official IndyCar box score showed Charlie Kimball, who finished 21st and completed 32 laps and Sebastien Bourdais, who finished 22nd and completed three laps, as both “Off Course," in the “Reason Out" column. Now, “Off Course" is a rather nebulous term and likely redundant considering that if Bourdais, Kimball or any other driver for that matter is out of the race. After all, if they are out of the race I would certainly hope they’d be “Off Course."

Now, being vague or not entirely specifically isn’t necessarily bad, or wrong. For example, we wouldn’t expect a driver to say “my turd (insert manufacturer name here) engine, which couldn’t power my lawnmower, crapped out, again." And there are likely stipulations with the manufacturers that provide guidelines as what team and series personnel can and/or cannot say. Therefore, “Off Course" could be the agreed upon phrase – imperfect as it may be.

Well, not according to Dale Coyne Racing, who provided a little more detail as to what happened in their team release. “Bourdais wouldn’t make it any further as his engine failed (emphasis mine) at the start of the third lap, ending his day in 22nd," read the release. Bourdais’ official quote also stated “the engine failed." From this, I think we can reasonably deduce that Bourdais was “Off Course" because “his engine failed." Also, Bourdais also mentioned on the radio that his engine failed. However, given that could be considered “heat of the moment" and is not an official team or series release, I do not regard that for this discussion.

As for Kimball, his Twitter (yes this is relevant) stated that he retired due to a “mechanical" issue.

Now, we don’t know if the reason Kimball went “Off Course" was the same reason Bourdais went “Off Course" But let’s assume for a moment that Kimball’s “mechanical" was the same as Bourdais’ “engine" (this assumption could be reasonable considering IndyCar classified their retirements the same). But whatever the case we have classifications for two incidents; or is it three classifications for two incidents that were the same? See the confusion?
Now, given that race engines are naturally stressed, I don’t see any real harm in simply calling it what it is, and saying the engine failed as DCR did. No reasonable person is going to say “what a bunch of chumps those (insert manufacturer name here) folk are" over an engine expiring. At the same time, it’s not my money, and if Honda or Chevrolet wants the teams/series to say something such as “Mechanical," or “Off Course" then fine. But that needs to be consistent across any team, series or driver on the record statement or release.

Because with DCR saying “engine", Kimball saying “mechanical," and the series saying “Off Course," it looks as either the series and/or Kimball aren’t being entirely forthcoming or someone isn’t following proper procedure. And to those paying attention, someone looks like a chump.

The solution is simple: have a procedure mandated by the series to the teams, regarding how you will handle engine failures in the future. And it doesn’t matter what the procedure is; it just matters that you have one.