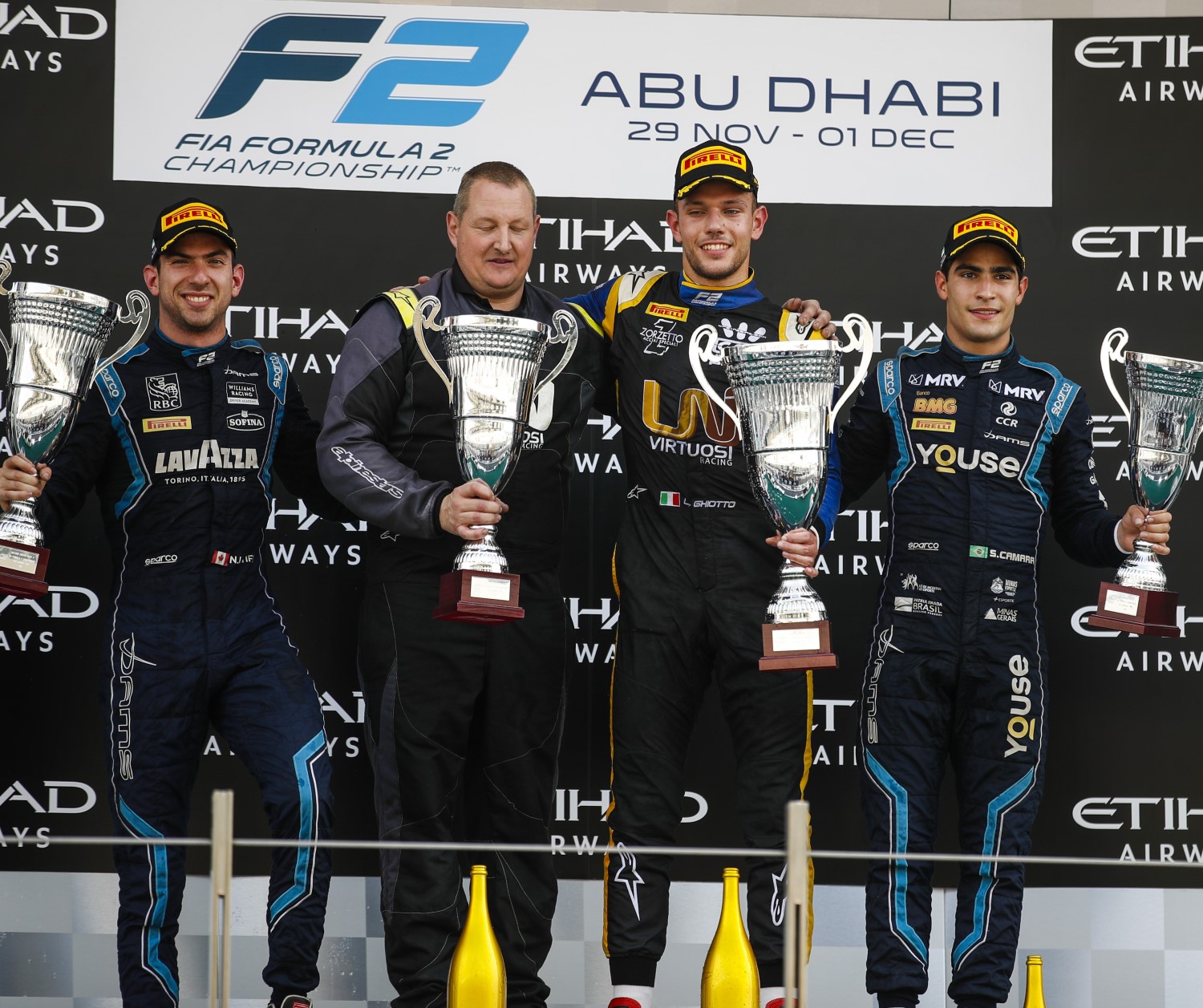 Luca Ghiotto made it back-to-back Sprint Race wins to seal third in the Championship and close out his final Formula 2 race with a victory. The win is the Italian’s fifth during his time in F2, and fourth this season, as he brings a close to the 2019 season. Finishing in second place, Nicholas Latifi is crowned Vice-Champion, while his teammate Sergio Sette Camara claimed the final podium spot and fourth in the Championship.

With Latifi and Ghiotto battling to become Vice-Champion, and lining up second and third on the reverse grid, they knew that a strong start would be vital. Ghiotto’s was perfect, Latifi’s was sluggish. The Italian fired ahead, as Latifi failed to challenge Giuliano Alesi on reverse pole, and lost out to Ghiotto.

Guanyu Zhou struggled with the getaway himself, as he dropped down to eleventh and allowed Jordan King, Sette Camara and Mick Schumacher through. Alesi had remained in front for all of this, and even set the fastest lap. The Frenchman’s race quickly began to unravel though, as his tires struggled to keep up with his demands and Ghiotto started to reel him in.

As the Italian closed the gap on the Trident racer, Mick Schumacher attempted to enter a three-wary battle with Louis Deletraz and Nobuharu Matsushita, however, the German got caught out down the straight, and Sette Camara shot from nowhere to surge past the Schumacher. The Brazilian then followed this up by diving down the side of Deletraz, who braked as late as possible, before eventually giving way to the Dams driver.

Ghiotto had gotten within DRS range of Alesi, took a tow and fired down the left of him, before taking the inside line. The Italian roared into the distance, as Alesi fell into the path of Latifi, who swiftly eased past him.

Ilott piled further misery on the Frenchman as he followed Ghiotto and Latifi through to take up the final spot on the podium and throw Alesi down to fourth. The Trident man was handed some brief respite, as Matsushita in fifth was too busy defending against Sette Camara to attempt an overtake himself.

The in-form DAMS driver was finally able to battle ahead of Matsushita, and made the most of a lock-up from Alesi, to dive ahead and steal fourth. Ghiotto had begun to struggle out in front, warning his team over radio that his tires were shot. Luckily for him, Latifi appeared to be suffering with the same issue, which allowed Ghiotto to ease off, and still build a bit of a buffer in clean air.

Further down the order, Jack Aitken had begun to recover positions, firstly firing ahead of Jordan King, then powering past Schumacher down the straight, and edging ahead of him around the outside of the corner, which put him in the final points’ position.

Racing was momentarily brought to a halt as Nikita Mazepin clipped the side of Matevos Isaakyan and spun the Sauber Junior Team Driver 180 degrees, ending both of their races.

When racing resumed, Sette Camara made a daring move on Ilott, with just two laps to go. The Brazilian squeezed past him down the straight, but the Briton battled back in front. Sette Camara had another go, and this time, Ilott was forced to give up the position.

Ghiotto crossed the line in first with a 7s gap to Latifi, who settled for second, ahead of his teammate Sette Camara. Ilott claimed fourth, ahead of Alesi, who secured his highest ever finish in F2. Deletraz managed to squeeze past Matsushita on the final lap for sixth, while Aitken completed the points’ positions, in eighth.

With the curtain closed on the 2019 F2 campaign, Nyck de Vries finished first on 266 points, Latifi second on 214, and Ghiotto moves up to third, with 207 points. Sette Camara drops to fourth, despite his Feature Race win, while Aitken completes the top five, with 159 points.

In the Teams’ Championship, Dams finish on 418 points, ahead of UNI-Virtuosi on 347 and ART Grand Prix on 277. Carlin finish fourth with 236 points and Campos Racing fifth with 189.

The teams will remain in Abu Dhabi for post-season testing next week, when they will get their first opportunity to test out potential line-ups for 2020.