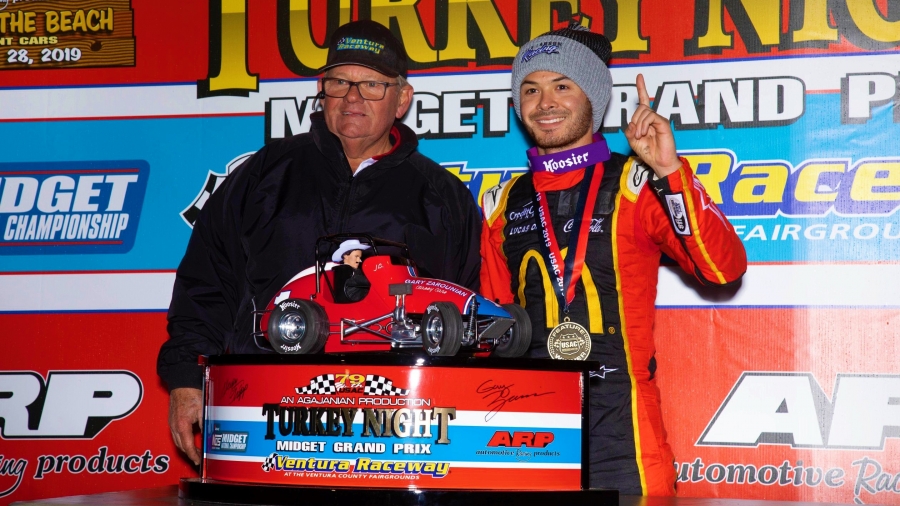 Somehow, someway, the Elk Grove, Calif. native regained his footing, kept his foot on the throttle and carried on as if it was just part of the game plan.

Obviously, it wasn’t, but Larson welcomes a challenge and responded to it in kind throughout the night, beginning with his qualifying run. After being a favorite to win the pole, Larson uncharacteristically spun on his second qualifying lap, relegating him to 16th fastest and forcing him to carve through the field if he was to reach the pinnacle once again.

Larson seemingly took it all in stride, even on a racing surface that had been deluged by heavy rain over the past three days that made the 1/5-mile oceanside bullring a giddy-up, bucking bronco style ride from the word go.

With all those challenges facing him, and even a lengthy precipitation delay during the night’s qualifying races, it still seemed inevitable that Larson was going to be a factor regardless if he started mid-pack, on the tail or in the middle of the Pacific Ocean with one arm tied behind his back. That’s just how good Larson has been of late behind the wheel of a midget.

None of these things could prove a hindrance to Larson who won the prestigious race for a third time, joining Ron Shuman (8), Billy Boat (3) and Christopher Bell (3) as one of the Mt. Rushmore figures to win the event on at least three occasions following previous victories in 2012 and 2016.

“I’ve always run well at the Turkey Night Grand Prix," Larson admitted. “To get another one feels great. I had to work hard for that one, everybody did, just to get to the checkered flag. It was extremely rough, but fun too because it was challenging, and the ruts changed all throughout the race."

However, with all those challenges aside, Larson’s largest thorn was teenage sensation Cannon McIntosh, who was making his first Turkey Night Grand Prix appearance and was a prime contender to become the first driver since Warren Mockler in 1986 to win in his very first Turkey Night appearance.

McIntosh led the field for a race-high 67 laps until Larson went full bore to the topside of McIntosh in turn three following a restart with 11 laps remaining to lock down his 19th career USAC National Midget win, equaling him with Jerry Coons Jr., Stan Fox and Jason Leffler for 33rd all-time, a list of wins that includes previous Turkey Night triumphs in 2012 and 2016.

“Cannon, I feel, definitely had the best car. He was really fast," Larson said. “I noticed during the caution right before I got by him, his right rear radius rod had broken. I knew that would affect his balance some. I was able to get around one and two good, and then get around him in three and four."

The key for most was to avoid the pervasive perilousness that had entrenched so many on this night with 98 physically and mentally demanding laps that were a test of endurance. Pole winner Kevin Thomas, Jr. was the enforcer early on, leading the first 20 circuits of the A-Main until a lap 21 restart that saw McIntosh hang ten on the topside of turn two to drive past both Spencer Bayston for second and Thomas for the lead in the blink of an eye.

Moments later, two-time NASCAR Xfinity Series champ Ricky Stenhouse, Jr. endured the first of two Maalox moments, first flipping on lap 22 in turn one and again on lap 28 in turn three. Thomas himself flipped on the 70th lap while running fourth amidst a tussle with lapped traffic.

Following the red for Thomas, it became just a common core sprint race with 29 laps to go and third-running Larson beginning to surge. With 22 laps remaining, second place Bayston hit a hole in between turns three and four, knocking him sideways in his saddle as he fought to regain control. Larson immediately pounced to the inside of Bayston to rip second away, with the two banging wheels and passing like two ships in the night as Larson scooted past and now lie three quarters of a second behind leader McIntosh.

That gap closed rapidly, and Larson was on McIntosh like white on rice, painting the 08 on McIntosh’s tail tank with a hint of chrome from his front bumper midway down the back straight with 12 laps remaining. Meanwhile, McIntosh did his best imitation of Amerigo Vespucci as he explored new land in front of C.J. Sarna, eventually diving under the Western States Midget regular with Larson climbing the turn three berm hot on his tracks.

Just as traffic began to play a starring role, that bit part was cut from the ending when eighth running Jesse Colwell stopped on the front straightaway on lap 87 to bring out the yellow flag. McIntosh was routinely high-quality on restarts in clean air while Larson seemingly made gains in traffic, but that didn’t hinder Larson from driving around McIntosh in a one-on-one match on the 88th lap in turn three to secure the lead.

As Larson extended the interval to two seconds over McIntosh, 2019 USAC NOS Energy Drink National Midget champion Tyler Courtney flipped wildly on the front straight to necessitate a red flag and an ensuing green-white-checkered restart and finish. It took two attempts for the GWC, but Larson was in control throughout, though McIntosh’s wounded machine put up a fighting effort at the end, that was just not enough to run down Larson.

For McIntosh, a native of Bixby, Okla., a second-place run was much needed after a succession of peaks and valleys that saw the 16-year-old win his first career USAC National Midget race in March at the Southern Illinois Center to go along with several bits of bad luck and incidents that plagued the team throughout 2019. But it was a solid run nonetheless although, like their season as a whole, they had to fight tooth-and-nail to score their hard-earned runner up result to earn Don Basile Rookie of the Race honors.

“My legs, I couldn’t really feel them there at the end," said the driver after the initial 98-lap race of his young career. “I was just trying to maintain a good pace because you can’t really just run out and go your hardest for the first 30, so I was just trying to be patient and smooth. I knew something was wrong toward the end, I just didn’t know what it was. It wasn’t affecting it too bad, but it happens, it’s part of racing."

Meanwhile, Robert Dalby of Anaheim, Calif. wrapped up the 2019 USAC Western States Midget championship following a 26th place finish on Friday night to win by a final margin of 29 points over Cory Elliott. Dalby then announced his intentions to move himself and his racing operation to Indiana to chase the National trail in 2020.

Friday’s race marked just the sixth occasion during the USAC era, 1956-present, that the Turkey Night Grand Prix had not been run on Thanksgiving night. It had been 36 years since the last time it occurred back in 1983, when it was run on Friday. Other similar occurrences came in 1965 when it was run on Saturday of the same weekend, in 1973 when it was contested on Friday, in 1975 on Sunday and in 1981 when it was held nine days later on Saturday of the following weekend, the only time the race has been held in December during the USAC era.