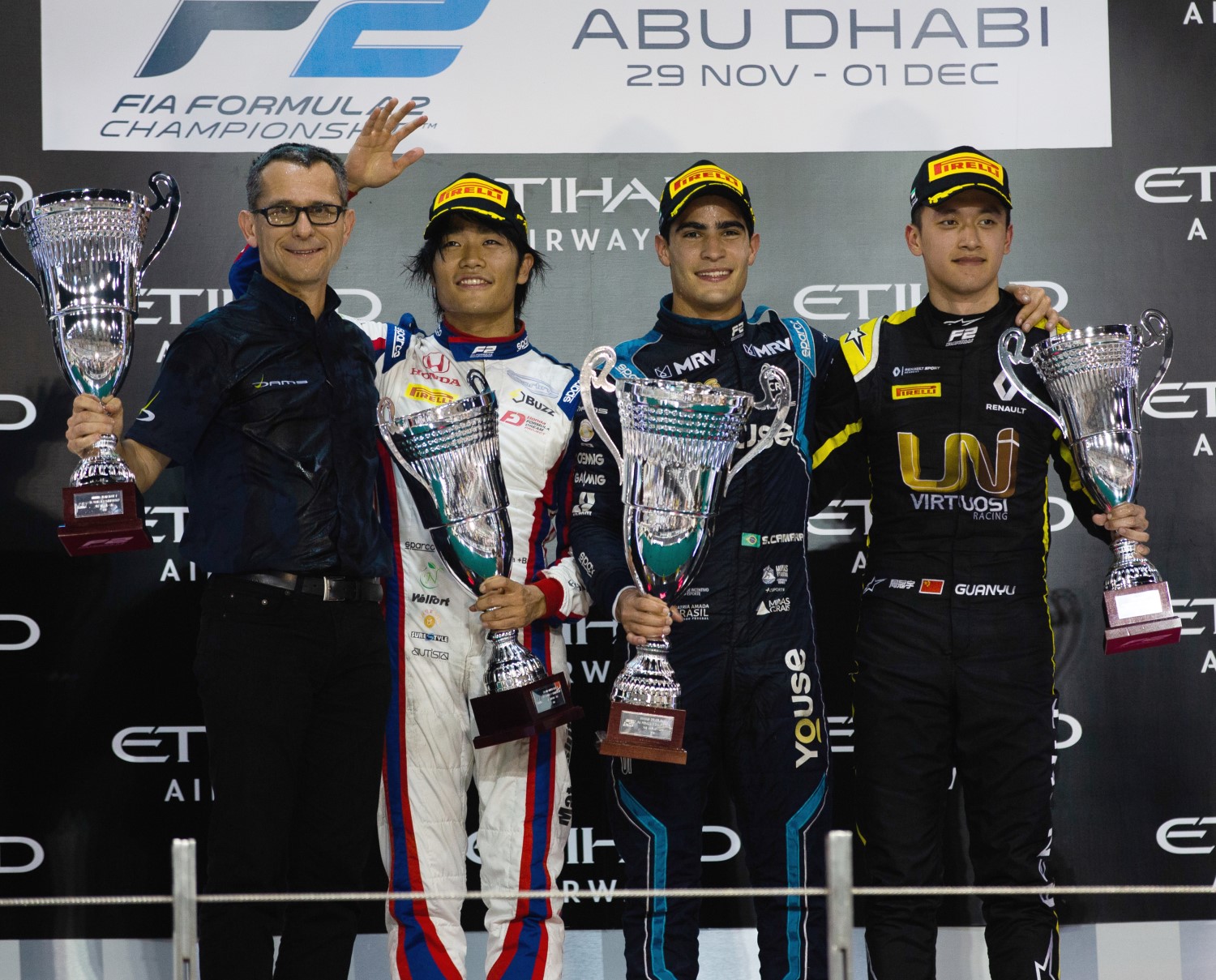 Sergio Sette Camara battled to his first Feature Race win in Formula 2 and earned DAMS the Teams’ Championship title in emphatic style under the lights at Yas Marina. The Brazilian recovered from a slow start to finish five seconds ahead of Carlin’s Nobuharu Matsushita and Guanyu Zhou, of DAMS’ title rivals UNI-Virtuosi.

Emotions poured from the French side’s pit wall in the aftermath, as the team passionately told Sette Camara on the radio: “Jean-Paul would be proud of that one," in honor of the late Jean-Paul Driot, the French team’s founder.

Sette Camara may have crossed the checkered flag in first, but he was made to work for it. The Brazilian was slow off the line and fell behind both Louis Deletraz and Callum Ilott at the start. The Swiss driver was the main beneficiary, firing down the middle of the two and into the lead.

There was a lot going on behind them too, as Zhou went three wide with Matsushita and Nyck de Vries and marginally nudged in front. The Chinese driver couldn’t sustain his pace though and fell behind both shortly after.

Unlike those ahead of him, Matsushita had opted for the soft tires and made the most of Sette Camara and Ilott’s degrading rubber to leap ahead and place himself directly behind Deletraz. He quickly reeled the race leader in, and Deletraz was powerless to prevent his teammate from taking the lead, as Matsushita dove down the side of him. Deletraz was straight on the team radio to ask if he could pit yet – his engineer swiftly delivered the news that he had to wait.

Like Matsushita, Zhou had also started on the softs and made light work of passing both Sette Camara and Deletraz, who ran into the pits for fresh rubber on the following lap. Returning eighth and ninth, they had a fight on their hands to prevent Matsushita from building a big enough buffer at the front and running away with the lead.

A virtual safety car briefly brought a halt to the action, after Mahaveer Raghunathan had locked up and skidded off track, which forced him to retire. When racing resumed, Deletraz and Sette Camara began to sift through the field of un-pitted drivers, starting with Marino Sato. Deletraz followed this up with a slick overtake of Nikita Mazepin, but the Russian was more stubborn with Sette Camara and refused to be passed again so soon.

Out in front, Matsushita’s advantage over Zhou in P2 was waning – the Carlin driver locked up and ran wide at Turn 9, missing the apex and losing valuable time. Sette Camara eventually found a way past Mazepin. Taking a tow, the Brazilian slingshot down the side of him with the aid of DRS. This put the Russian into the path of F2 debutant Christian Lundgaard, who attempted a move, but went wide. Ilott made the most of this, coming out of nowhere to dive ahead of them both and line-up behind Sette Camara and Deletraz.

The battle between Matsushita and Zhou for the lead was intensifying. Zhou appeared to have managed his tires better and got within DRS range, but before he could pass, Matsushita ducked into the pits for fresh boots. This briefly handed Zhou the lead, but he still needed to stop himself.

The pivotal moment came from behind them. Sette Camara had fought his way back into contention and bombed ahead of Deletraz. Zhou pitted, and the Brazilian retook the lead for the first time since the start of the race. Matsushita had returned fourth, but got straight ahead of Ilott on the fresher, faster tires. This was mirrored by Zhou, who returned fifth, but shot ahead of Ilott on the supersofts. With just a few laps remaining, Sette Camara had built up a near five-second gap, making him uncatchable out in front.

Second and third would be more realistic, as Deletraz began to struggle with his rubber. The Swiss racer battled hard, but Matsushita had the better grip and eventually wrestled ahead. His teammate fought back, but simply didn’t have the tires to regain the position. Once again, Zhou mirrored his move and elbowed his way through to third shortly after.

There had been little movement behind them, but for Giuliano Alesi, who set the fastest lap on his way to passing Mick Schumacher for eighth place, and reverse grid pole for the Sprint Race.

Sette Camara cleanly crossed the line for his second victory of the year, finishing ahead of Matsushita and Zhou, who completed the podium. Deletraz was forced to settle for fourth, ahead of Ilott, Luca Ghiotto, Nicholas Latifi, and Alesi. Schumacher and Mazepin took the final points’ paying positions.

With just tomorrow’s Sprint Race remaining of the 2019 campaign, Champion Nyck de Vries’ sits in first on 266 points, and Latifi second with 200. Sette Camara’s win puts him within touching distance of his teammate on 194 points. Ghiotto drops to fourth on 192, ahead of Jack Aitken on 159.

In the Teams’ Championship, DAMS are crowned Champions with 394 points, ahead of UNI-Virtuosi on 331. ART Grand Prix sit third with 277, Carlin fourth on 230 and Campos Racing fifth with 189.

Alesi will be in search of his first F2 win in the final Sprint Race of the season tomorrow, when lights go out at 1.30pm (local time).