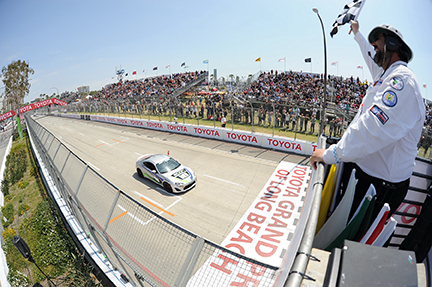 UPDATE See our video interview (below) with Jim Michaelian where we broach the subject of this rumor – will Toyota drop sponsorship of this race. Based on Jim's response we will downgrade this rumor to 'false'. He appears very confident Toyota is a happy sponsor.

For four decades it was a crowd-pleasing sideshow to the main event, offering spectators a glimpse of Hollywood stars and such auto-racing greats as Mario Andretti and Al Unser Jr.

Hollywood, however, has hit the brakes. The Toyota Pro/Celebrity Race will be absent from this year's three-day race weekend, which climaxes Sunday, April 9, with the exhilarating, ear-splitting, 85-lap, 167.45-mile Toyota Grand Prix of Long Beach.

Citing the relocation of its North American headquarters from Torrance to the Dallas suburb of Plano, Toyota indicated a year ago it would no longer put on the celebrity event.

"Toyota told us they weren't able to commit to providing the support that's required for the (celebrity event)," Jim Michaelian, Grand Prix Association of Long Beach president and chief executive officer, said at the time. "The cars, the mechanics, the training for drivers. It's huge, and they felt that now that they're in Texas, they were no longer able to keep the race going at a functional level."

So now some are asking: Will the move to Texas trigger a total pullout soon, leaving the Grand Prix without the title sponsor that branded the nation's longest-running street race for 38 years?

The question was referred to Les Unger, a Long Beach consultant who was the giant carmaker's national motorsports manager for 31 years until he retired in 2014. He oversaw the Long Beach race and other company-sponsored races.

"Toyota's long-standing policy is not to comment on any of its future plans/recommendations/commitments with respect to any of the company's current sponsorships/entitlements," Unger said in an email.

Still, Unger said Toyota sponsors events all over the country.

"That's irrespective of whether the company is headquartered in L.A. or in Plano, Texas," he said by phone.

Michaelian declined to speculate on what may happen down the road. But he said he didn't think the corporate move would affect a decision on involvement in the local Grand Prix.

He, too, mentioned the many racing events Toyota has been involved in.

"They did that out of Torrance. They're going to do that out of Plano," Michaelian said. "They're not limited geographically."

"Their relocation to Plano, I would think, would have minimal effect on their analysis of where they would like to spend their marketing dollars," he said.

Michaelian noted Toyota has been a player in the Long Beach race from the get-go, and has headlined the title since 1980.

"That's an extraordinary length of time," he said.

Long Beach Mayor Robert Garcia said he couldn't predict what Toyota might do, but didn't seem worried the firm might drop its sponsorship.

Christopher Thornberg, a Los Angeles economist and director of UC Riverside's Center for Economic Forecasting and Development, suggested if Toyota were to end its relationship it wouldn't be the end of the world.

"Long Beach should have lots of options," Thornberg said. "The point is, you'd have to go find another sponsor. It's as simple as that."

In any event, for now, the Toyota Grand Prix of Long Beach will roar once again next weekend — for the 43rd straight year.

He said the race will last an hour and 35 minutes or a little longer, depending on how many yellow flags are waved.

All that noise, all that exhilaration and all that media coverage, say boosters and city officials, will inject a huge booster shot into the area's economic arm.

No one has conducted a study recently to put a finger on that dollars-and-cents impact, officials said.

Michaelian said the last such study he is aware of was undertaken about eight years ago. He said it estimated a $30 million bump.

This year, he said, the impact will be close to $45 million.

"I would be very skeptical that it is close to $45 million," said Michael Leeds, a Temple University professor and chairman of the Philadelphia school's economic department. He specializes in sports economics.

Thornberg, the Los Angeles economist, said a key to measuring the impact of an event like the Grand Prix is how many people it draws from outside the region.

Michaelian said the earlier study estimated 80 percent of racegoers hail from somewhere in Southern California, from as far north as Santa Barbara, as far east as Palm Springs and as far south as San Diego.

He said 22 percent of that crowd comes from Greater Long Beach, defined as the city plus adjacent communities such as Bellflower, Lakewood and Seal Beach.

They are "pumping real money into the economy," said Victor Matheson, an economics professor at College of the Holy Cross in Worcester, Massachusetts, who also is a nationally recognized expert of sports economics.. But he said that, because the cities are relatively close, those visitors don't stay as long as visitors from, say, the Midwest or East Coast.

That's not to say there isn't a significant local bump in spending. There is.

And 10 hours of television coverage is planned over the weekend.

"That translates into a 10-hour postcard, if you will, on what Long Beach has to offer in attractions," Michaelian said. "You turn around and look back and you see the skyline of the city."

Sure, the race lures many. But it drives others away.

They spend hard-earned cash elsewhere, he said, instead of dropping money at a local restaurant.

Matheson said economic impact studies are good at determining who is in town during a big event.

"They're almost completely unable to tell you who isn't there," he said.

John Sangmeister, owner of Gladstone's Long Beach off Shoreline Drive, said he loses $200,000 to $400,000 annually. That's not only during the three-day weekend, Sangmeister said. It's during the run-up to and breakdown after the race.

"For four months a year we're a construction zone for the Grand Prix," he said.

Jerry Schubel, president and chief executive officer for Aquarium of the Pacific, said the popular marine park sheds $300,000 in revenue — and even more when the race falls during school spring vacations.

"The Grand Prix always takes a toll on us," Schubel said.

In the past, the aquarium shut down. Last year Schubel and promoters cut a deal to keep it open and shuttle people to the attraction. Though there were transportation glitches, that helped.

John Rouse, vice president of operations, said 11,000 people passed through aquarium gates during the three days. Still, he said, that's half of normal traffic for an April weekend.

Sangmeister said the city should seriously examine whether it's best to maintain the race long term or open more of the waterfront to development.

"We should explore all opportunities," he said. "It is their duty to find the highest and best use of that land. We may find that it's auto racing. But I doubt it."

On the other hand, said Kraig Kojian, president and chief executive officer for the Downtown Long Beach Alliance, which represents downtown businesses and residents, the race is something the community has come to expect.

"It has become part of the staple of our downtown," Kojian said.

"That's a good thing for downtown. We want this to be the center of activity." David Downey/Long Beach Press Telegram