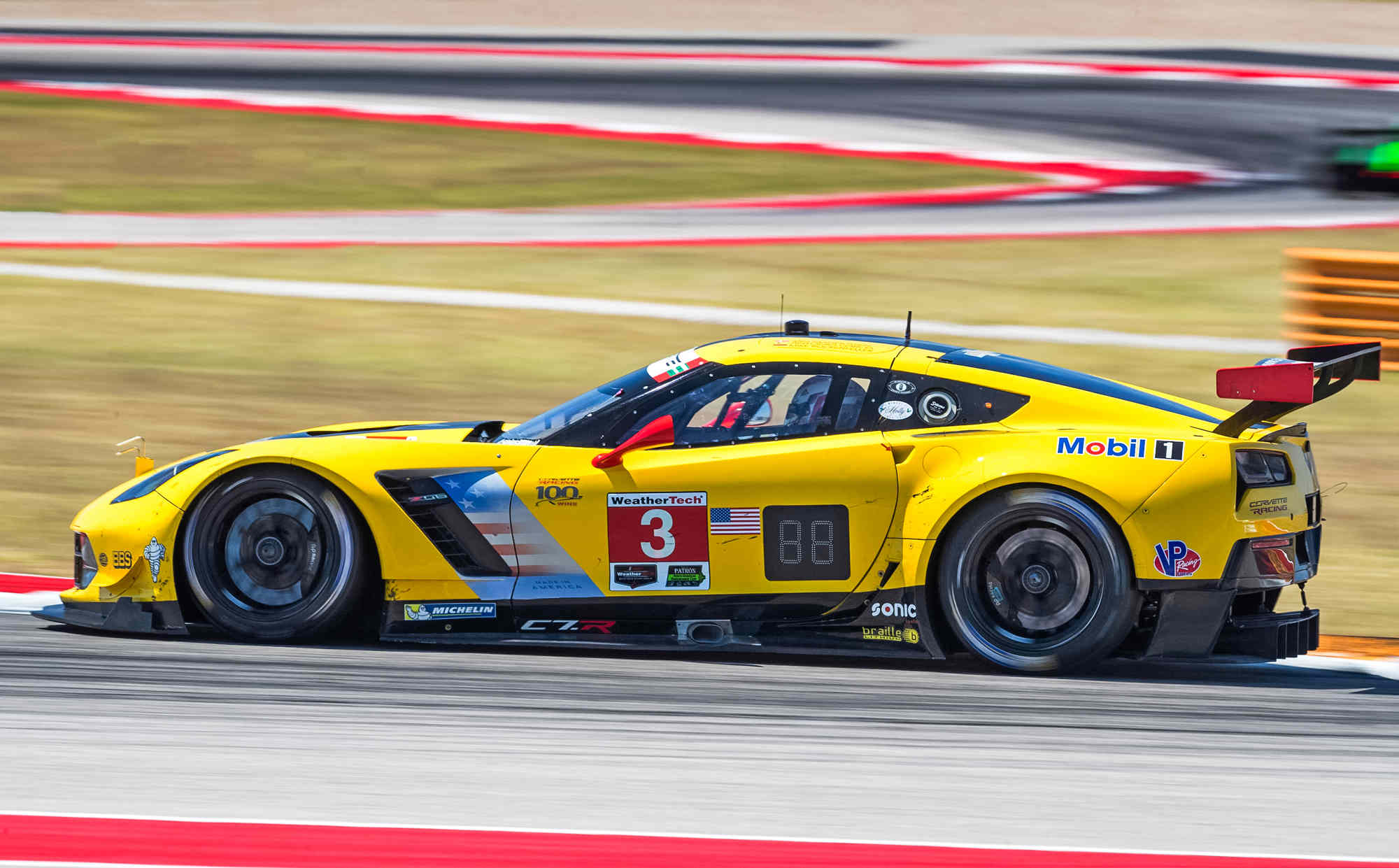 DAYTONA BEACH, Fla. – With the IMSA WeatherTech SportsCar Championship GT Le Mans (GTLM) class off until the Sahlen’s Six Hours of The Glen on July 2, the focus for most competitors in the class now shifts fully to the 24 Hours of Le Mans on June 17-18.

The GTLM team clearly carrying the most momentum heading to the Circuit de la Sarthe is Corvette Racing, which has won each of the past three events dating back to the Mobil 1 Twelve Hours of Sebring Fueled by Fresh From Florida in March. The team’s No. 4 Corvette C7.R shared by defending GTLM co-champions Tommy Milner and Oliver Gavin, won last month’s BUBBA burger Sports Car Grand Prix at Long Beach.

The No. 3 Corvette team of Antonio Garcia and Jan Magnussen, however, have the most momentum with victories at Sebring and last weekend’s Advance Auto Parts Sportscar Showdown at Circuit of The Americas. And in all actuality, the No. 3 team would be riding a three-race win streak were it not for an unfortunate, last-lap, last-turn incident in Long Beach.

The victory by Magnussen and Garcia at COTA was well-timed. In addition to providing valuable momentum and vindication for Long Beach, it also vaulted the No. 3 team into the lead in the GTLM point standings, as several of their closest competitors fell out of contention for the victory in the first turn of the first lap in a multi-car incident.

“I think it is the perfect way to come back after what happened at Long Beach," Garcia said. “We have had four races this year with zero mistakes by Corvette Racing in any of them. That is what it takes to be there if you have the pace to win."

[adinserter name="GOOGLE AD"]THIS LOOKS FAMILIAR: Much has been made of the recent run of GT Daytona (GTD) class success for the first-year Mercedes-AMG GT3 program, and the No. 33 Riley Motorsports-Team AMG team of Ben Keating and Jeroen Bleekemolen, and with good reason. Keating and Bleekemolen did win their second race of the season last weekend at COTA, and made it three in a row for Mercedes, which also won at Long Beach with No. 50 WeatherTech-Riley Motorsports teammates Cooper MacNeil and Gunnar Jeannette in addition to the No. 33’s wins at Sebring and COTA.

However, 2016 WeatherTech Championship GTD co-champions Christina Nielsen and Alessandro Balzan are showing the same type of consistency this year that helped them win last year’s title. The No. 63 Scuderia Corsa Ferrari 488 GT3 duo picked up their third consecutive podium result with a second-place run in the Advance Auto Parts Sportscar Showdown. They previously finished second at Sebring and third at Long Beach.

“Scuderia Corsa has always performed really well," said Nielsen after the race. “Today, they executed at the top level. It was an amazing effort by the team, and it was nice to have another podium finish and score some good points for the championship."

Nielsen and Balzan rode seven podium results from 11 races to the title in 2016.

BODYMOTION MOVING ON UP: Friday’s IMSA Continental Tire SportsCar Challenge Circuit of The Americas 120 wreaked havoc for several drivers and teams near the top of the Grand Sport (GS) class point standings.

Both CJ Wilson Racing entries, which entered the weekend 1-2 in points, encountered problems in the race. The team’s No. 35 Porsche Cayman GT4 shared by Damien Faulkner and Russell Ward retired due to a crash, while the No. 33 Porsche co-driven by Marc Miller and Till Bechtolsheimer battled to an eighth-place result.

It was a good day, however, for No. 12 Bodymotion Racing Porsche co-drivers Trent Hindman and Cameron Cassels. The teammates who opened the year with a victory in the four-hour BMW Endurance Challenge at Daytona in January, returned to the podium with a third-place run in the race won by Matt Plumb and Paul Holton in the No. 76 C360R McLaren GT4. That result put them back atop the GS point standings with three of 10 races in the books.

"Today was a full team victory from car preparation, to the set-up, to the strategy, to the guys behind the wall," said Bodymotion Inc. Competition Director, Geoff Abel. “We had flawless execution all day. What we needed today was points. Today was all about bringing home some points, which we were able to do and have now retaken the points lead."

COTA WEEKEND UPDATE: In addition to the WeatherTech Championship and the Continental Tire Challenge, two additional IMSA-sanctioned series were in action at Circuit of The Americas. The Porsche GT3 Cup Challenge USA by Yokohama was in action for its fifth and sixth rounds of the season on Friday and Saturday, while the Lamborghini Super Trofeo North America kicked off its 2017 campaign with a pair of races.

Trenton Estep, a 17-year-old from San Antonio, Texas picked up a “home race" victory on Friday night in his No. 3 JDX Racing Porsche 911 in the lead Platinum Cup class, while Victor Gomez IV won the Gold Cup class. Saturday’s second half of the doubleheader saw Ohio’s Corey Fergus take the victory in the No. 00 entry, with Estep hot on his heels. David Ducote took the Gold Cup win in Race #2 in the No. 25 NGT Motorsport Porsche.

In the Lamborghini Super Trofeo series, Richard Antinucci won both races in the No. 16 Lamborghini Huracan fielded by Change Racing. Antinucci was series’ North America Pro driver champion in 2015.