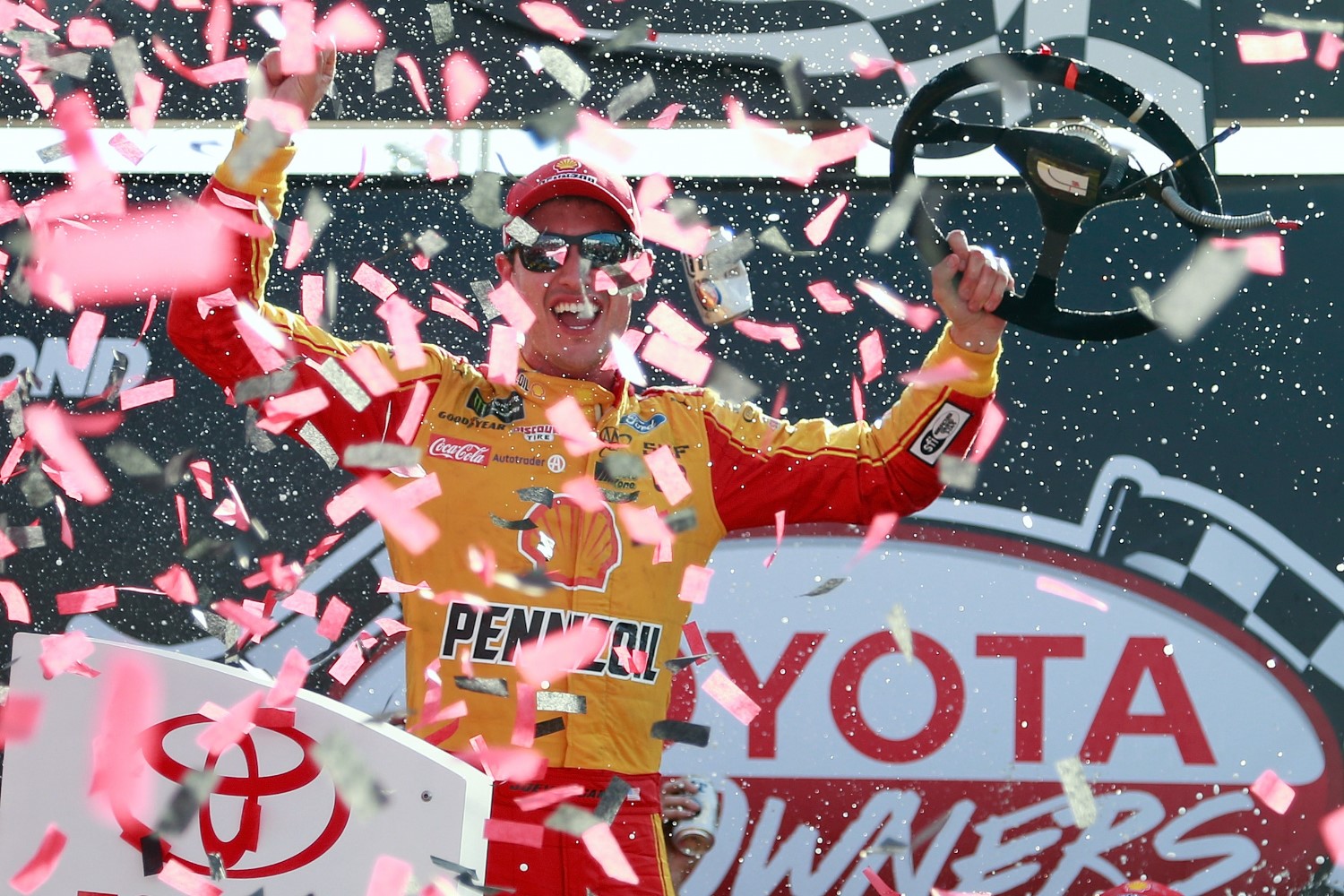 Logano took off from the field following the final restart of the day on Lap 382. His Team Penske teammate, Brad Keselowski finished second, 0.775 seconds behind Logano.

Right behind them were Denny Hamlin, Ricky Stenhouse Jr., and Kevin Harvick to complete the top five.

The first major incident of the day happened late when Hendrick Motorsports teammates Dale Earnhardt Jr. and Jimmie Johnson got into each other, causing damage to Junior's No. 88. He finished 30th, while Johnson placed 11th.

The Monster Energy Series hits the track again next weekend at NASCAR's biggest track for the GEICO 500 at Talladega Superspeedway (Sunday, 2 p.m. ET, FOX). Keselowski is the defending winner.

[adinserter name="GOOGLE AD"]Joey Logano
Yeah, it was really nice. Obviously I got the text yesterday from Todd when I was up in the booth talking. I thought, oh, man, this is not the place you want to start in the back for a lot of reasons. For one, you know, you have five, six laps on your tires because of qualifying, and then obviously you don't really have an advantage on anybody. Two, being a short track, you've kind of got to go hard on the short run to try to not go down a lap and hope for a caution. That worked out really well. We got a nice caution five laps into the race, put some sticker tires on it when some guys still had their qualifiers on it, be able to start picking them off slowly. Took us all day to at least break into the top 5. We kind of leveled out as the fifth, seventh, eight place car. Seemed like everyone from fourth to 10th was about the same speed, so it was all about just gaining a little bit of track position on restarts and pit stops, and we just kind of stayed right around there. Todd made some good calls at the end, got us some good track position. We had a good pit stop at the end that maintained the track position and then some good restarts that were able to get the lead back when everyone else stayed out on old tires and just try to check out, that was the goal. It wasn't one of those save your tires and don't get too big of a lead. It was go as hard as you possibly can because I knew how quick Brad was. I saw it all day. He was the fastest car. He led a ton of laps today, so I knew I had to get the biggest lead I could, because he cut off a good second there at the end. Glad the race was 400 laps because if it was any shorter we probably wouldn't have won, and if it was any longer we probably wouldn't have won, so it turned out just right for us today.

Brad Keselowski
It was just hoping for another restart or the race to get extended for another 10 laps. I think we had a ton of long run speed today. That short run at the end…half the field came, half the field didn’t. I just got stuck in a lane of cars that didn’t go. By the time I did, he had a whole straightaway on me. I got it down to a couple of car lengths at the end. All and all I’m happy for Team Penske with the 1-2 finish. We’ll take it and move on.