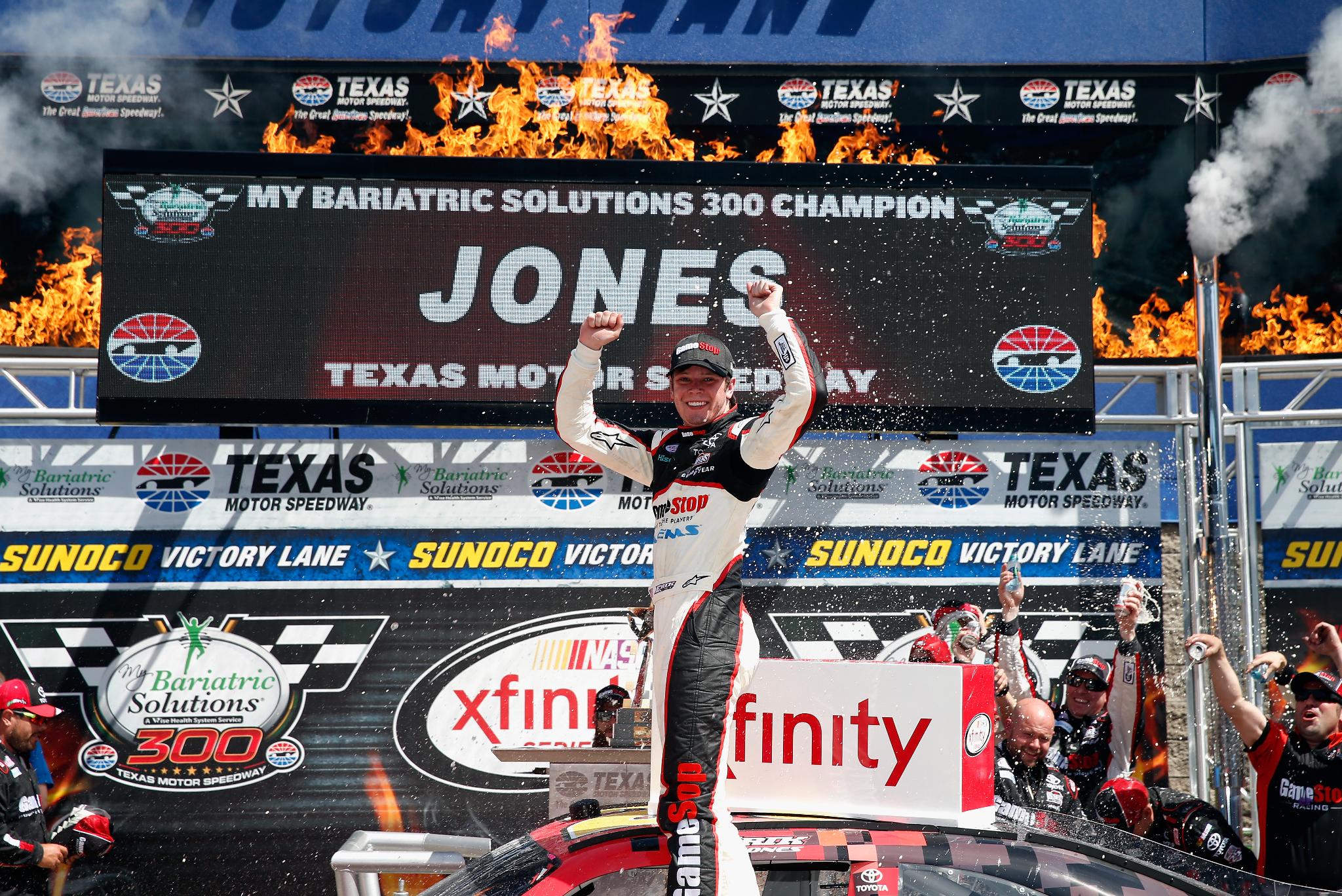 What a difference a pit stop made.

Erik Jones gained two seconds over Ryan Blaney on his final trip to pit road, and that was all the driver of the No. 20 Joe Gibbs Racing Toyota needed for a convincing victory in Saturday’s My Bariatric Solutions 300 NASCAR XFINITY Series race at Texas Motor Speedway.

In winning for the second time at Texas, the first time this season and the seventh time in his career, Jones led 112 of the 200 laps and stretched his advantage to more than three seconds in the late going before driving conservatively over the last three laps and beating Blaney to the stripe by .512 seconds.

"I tiptoed a lot there in the segments and ended up letting the 22 (Blaney) catch us and pass us, but then I was just super aggressive the whole time in traffic just trying to make passes as quick as I could and get as many cars as I could between myself and Ryan, and it paid off," Jones said.

[adinserter name="GOOGLE AD"] "I think we were probably a little slower than him for the last few laps – he had so many lapped cars to get around that there was no way he was going to get to us."

Kevin Harvick ran third, 21.383 seconds behind Jones, as only nine drivers finished on the lead lap. Austin Dillon was fourth, followed by Sunoco rookie Cole Custer, who posted a career-best fifth, and Darrell Wallace Jr., who finished sixth for the fifth consecutive race.

With the final stage of the race going green from a restart on lap 98 to the conclusion, Blaney ran down Jones and passed him for the lead on Lap 131. Jones came to pit road for fresh tires and fuel on Lap 147, and Blaney followed a lap later.

In the exchange of stops, Jones went from a half-second behind to 2.178 seconds ahead of the runner-up, and from that point on it was game over.

"I thought our car was pretty good all day," Blaney said. "The 20 seemed to be a little better than us for 35 or 40 laps. Then I feel like we could start running him down. We passed him before the last pit stop, and I thought our car was pretty decent right there. I needed to turn a little better early in a run. I knew it wasn’t going to be that long for the next stint."We didn’t come out with the lead, and that hurt us. I think if we would have come out with the lead, I don’t know if I could have held him off. He was pretty good right away, but we kind of over adjusted and got too free that last run. I felt like we were kind of even with them 10 laps into a run, but then he got so far out ahead that we couldn’t run him down. Just couldn’t get there."

Stage racing played a decisive role in strategies employed by NASCAR XFINITY Series regulars versus Monster Energy NASCAR Cup Series drivers moonlighting in Saturday’s race. When Garrett Smithley’s spin off Turn 2 brought out the fifth caution on Lap 84, most of the Cup drivers came to pit road. The XFINITY regulars, on the other hand, stayed on the track under the yellow to collect points at the end of the second stage, which concluded on Lap 90. William Byron won the stage and the accompanying playoff point, leading nine XFINITY regulars in the top 10 in that stage.

In contrast, Jones won the first stage, which featured only three full-time XFINITY drivers in the top 10.

Despite finishing 10th as the first driver one lap down, Elliott Sadler retained the series lead by six points over Byron in second place.