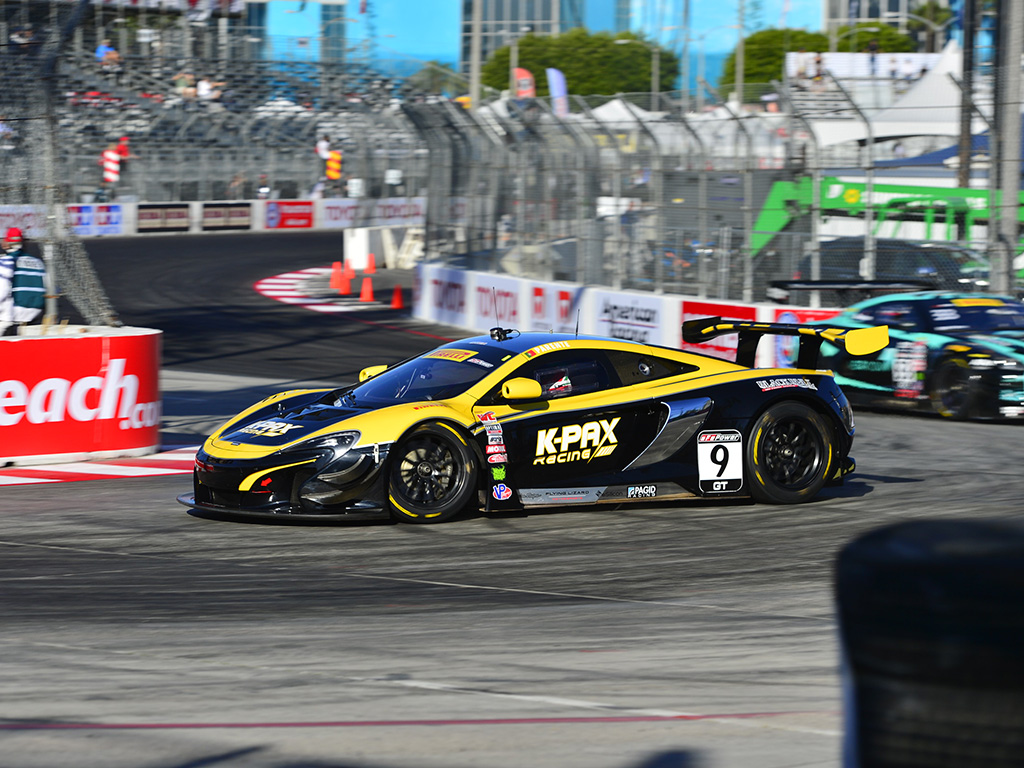 DAYTONA BEACH, Fla. – It was the gamble of a lifetime 29 years ago that took the career of one of the most decorated and diverse drivers in American motorsports to another level.

Scott Pruett cannot forget the impact the Toyota Grand Prix of Long Beach has had on his life, from coming to the track as a fan and meeting Niki Lauda as a teenager, to the year he bet on himself – and won.

It was in 1988 that Pruett sacrificed his life savings on an IndyCar opportunity that ultimately led to a transition from sports cars to open-wheel racing, and coming full-circle back to sports cars in the IMSA WeatherTech SportsCar Championship.

“Long Beach is that iconic track for me personally," said Pruett, who will drive a Lexus RC F GT3 in the BUBBA burger Sports Car Grand Prix on April 8. “For as many years as I’ve come here with sports cars and IndyCar, and the wins and the significance of them, I have so many great memories."

Fast forward to 2017 and Pruett’s career resume since that day has been nothing short of legendary. He’s amassed 60 career sports car wins – the most in professional American sports car racing history – and 11 sports car championships. He earned Indianapolis 500 Rookie of the Year honors in 1989, won two IndyCar races, and made 50 starts in the Monster Energy NASCAR Cup Series, scoring three top-five finishes.

And that’s just scratching the surface.

He scored his first win at Long Beach in a GRAND-AM event in 2006 driving a Lexus-powered prototype, and later won again in IMSA WeatherTech Championship competition in 2014. Those wins, along with an SCCA Trans Am victory in 1987, a win in the 2001 Toyota Pro/Celebrity race and two IndyCar podiums, earned him an induction into the Long Beach Motorsports Walk of Fame in 2012.

Pruett was relegated to giving guests pace car rides at last year’s event, but with the GT Daytona (GTD) class added to the Long Beach entry list this season, he returns with Lexus and co-driver Sage Karam in the No. 14 Lexus RC F GT3.

“It’s exciting to be back with a new program, and to be in Lexus’ backyard," he said. “There’s nothing like being in the backyard of a sponsor or manufacturer your involved with."

JDC-MILLER MOTORSPORTS IS UP TO THE TASK: Entering the 2017 WeatherTech Championship season in a brand new ORECA LM P2 prototype, JDC-Miller Motorsports wasn’t quite sure what to expect.

The privateer team had just stepped up to the Prototype class after its final season of running in the Prototype Challenge (PC) category, a step that placed them in direct competition with several factory-supported programs. After a rough start to the year at the Rolex 24 At Daytona, however, JDC-Miller Motorsports has proven to be up to the challenge, finishing fourth overall in the Mobil 1 Twelve Hours of Sebring Fueled by Fresh From Florida after running in podium contention for much of the race.

“Yes, Sebring was good for us, and obviously you always want to do better, but finishing P4 behind the three Cadillacs is a great result for us," said JDC-Miller Motorsports CEO and Managing Partner John Church. “It was very encouraging that we had the pace…running up front helps you stay out of trouble, especially at the long races."

JDC-Miller Motorsports was pleased with the results from testing at Sebring in February, and carried learnings on to race week, where the team set the fastest lap time during the first official practice session.

“Always a good feeling," said Church. “The team has done a superb job getting to know the new car, and having finished the two longest races is a true testament to their dedication."

Adapting to changing conditions is not new for JDC-Miller Motorsports, as the team currently fields cars in several IMSA-sanctioned series. Having quality hardware to work with certainly helps, though, and Church is proud to field the No. 85 ORECA, affectionately nicknamed the “Banana Boat" by fans due to the car’s bright yellow coloring and Hi-Tide Boat Lifts sponsorship.

“We are very happy with the ORECA Gibson package as it has shown to be fast at Daytona as well as at Sebring," he said. “I think it also is good for the series that a non-manufacturer backed team like ours running a Pro-Am line up can be competitive. Chris (Miller) and Misha (Goikhberg) did an unbelievable job and Stephen (Simpson) is for sure one of the most underestimated drivers out there."

Simpson, who will drive the full season with Goikhberg, a past champion of the IMSA Prototype Challenge Presented by Mazda series, gives all credit to the team for its preparation.

“We knew moving into the Prototype class we were going to be up against some big manufacturers, teams and drivers," he said. “But we wouldn't have made this move if we didn't think we could be successful in the top tier of sports car racing. Competing in the Prototype class is something I have been relishing. I want to be racing against the best teams and drivers out there and show that I and JDC-Miller Motorsports is a force to be reckoned with."

The team now heads to Long Beach, where the team dominated in 2016, leading the PC class from start to finish en route to victory.

“It’s going to be interesting going to Long Beach," said Church. “This year we come in a new class with a new car. Everybody is in the same boat, still getting a feel for things. It would be great to leave with a podium finish, a great way to reward the team and ORECA for all their hard work."

RISI COMPETIZIONE PRIMED TO DELIVER FERRARI’S FIRST WIN AT LONG BEACH SINCE 2008: One team to watch in a robust GT Le Mans (GTLM) field set to duel at Long Beach is the No. 62 Risi Competizione Ferrari 488 GTE.

Co-drivers Giancarlo Fisichella, Toni Vilander and James Calado have finished on the GTLM podium in each of the past three races, dating back to a victory in the 2016 season-ending Petit Le Mans at Road Atlanta. Fisichella and Vilander will share the Ferrari at Long Beach as the team’s full-season driver pairing, as Calado joins the team only for endurance events.

The trio kicked off 2017 with a pair of third-place finishes at the Rolex 24 At Daytona and the Mobil 1 Twelve Hours of Sebring Fueled by Fresh From Florida, and the Risi team is looking to continue its momentum in Long Beach.

“The GTLM class is so hard, we could see that again in both races at Daytona and Sebring," Vilander said. “Rivalry between different teams and manufacturers forces us all to take our game to another level. Racing is tough, but that’s why we love it. We are ready."

The sprint-race format and legendary street circuit layout at Long Beach presents a new set of circumstances to overcome compared with the endurance race/permanent road course format from the two season-opening races.

“Street circuits give us drivers a big challenge," Vilander continued. “When you need to find the last bit of lap time, you end up taking that risk level quite high. I’ve been on the Long Beach podium twice, finishing third both times. I think we have everything in the right place to challenge for the win this year. (Race Engineer) Rick (Mayer) and the crew are going to prepare our race car on top as always."

Winning at Long Beach, however, would mean more to Risi than just breaking through to the top step of the podium. The team is also looking to showcase Ferrari’s strength, as the manufacturer has a large presence in Beverly Hills, just over 30 miles from Long Beach, and is in the midst of its 70th anniversary.

Ferrari’s last win in IMSA competition at Long Beach came in 2008 with Dominik Farnbacher and Dirk Mueller behind the wheel of a Ferrari 430 GT. The duo took a GT2 class win by a narrow .102 seconds in the American Le Mans Series.

The Risi team’s last victory at Long Beach came the previous year in 2007 and the team has yet to finish atop the SoCal leaderboard again, albeit recording four podiums in its last seven Long Beach races.

“We have had great success on the Long Beach street circuit," Team Owner Giuseppe Risi said. “We won our first race there in 2007 with Jamie Melo and Mika Salo. It was a double podium because we ran a second car with Nic Jonsson and Anthony Lazzaro, which took third place, both in the Ferrari 430 GT2. We’ve raced there every year since 2007, except for 2012, and had further podiums in 2009, 2011 and the past two years. So, although it is a very difficult street circuit, we always race to win and would like to tally another victory there."

Given the team’s momentum and the important of this race to Ferrari, Risi Competizione should be a strong GTLM competitor in the BUBBA burger Sports Car Grand Prix of Long Beach.