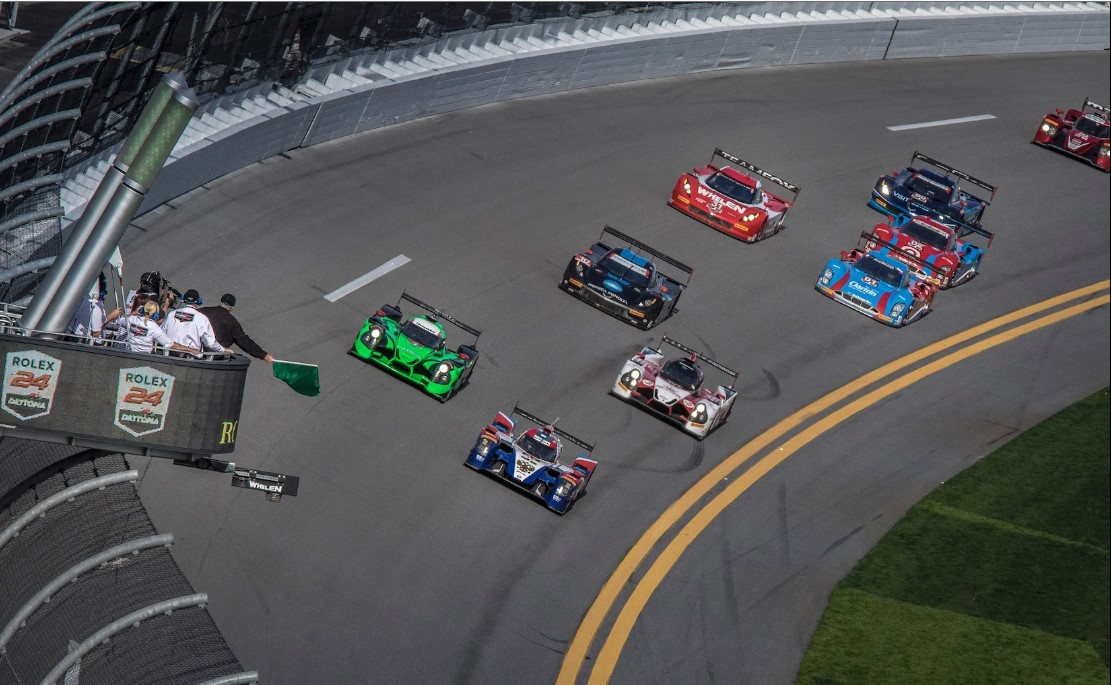 Geneva, Monday 23 January 2017 – All eyes will be on Daytona this weekend for the first major motor sport circuit event of the year, the 2017 Rolex 24 At DAYTONA. At 14:30 on Saturday 28 January, the green flag will drop as the Rolex clock begins its 24-hour countdown and racing gets underway at the Daytona International Speedway.

Earlier this month aficionados caught a glimpse of the all-star field of drivers they can expect at this year’s race. Preparing for what is regarded by many as one of the toughest endurance races, drivers from a variety of motor sport disciplines took part in two practice sessions during the Roar Before the Rolex 24.

[adinserter name="GOOGLE AD"]Topping the timesheet in the first practice session was Ben Hanley in the No.81 DragonSpeed ORECA LM P2. Although not quite able to match Ben Hanley’s time, it was former Formula 1 driver Sebastien Buemi who recorded the fastest time in the second and final weekend session in the No.13 ORECA LM P2 of Rebellion Racing.

Both entries will compete in the IMSA WeatherTech SportsCar Championship’s headlining Prototype class at the Rolex 24. The 2017 Rolex 24 At DAYTONA signals the start of the Championship and will begin when racing legend and this year’s Grand Marshal Dario Franchitti instructs the drivers to start their engines.

Competitors will complete almost 700 laps of the course and half of those in darkness. Those who conquer the almighty and gruelling Rolex 24 At DAYTONA will have demonstrated a level of precision and commitment worthy of the race’s ultimate reward – the legendary Rolex Oyster Perpetual Cosmograph Daytona. One driver who has already tasted success at Daytona no fewer than five times is Rolex friend and renowned driver Scott Pruett who will be back in 2017 with a new Lexus entry.

Ahead of this year’s race Scott Pruett, racing the No.14 RC F GT3 Lexus in the “Ultrasonic Blue 2.0" livery, explains: “The Rolex 24 At DAYTONA is magical for drivers, teams and fans alike because of its rich history and the level of performance it demands from all those who compete. It is the ultimate race against time in challenging conditions, we drive for long hours in darkness, and I’m extremely proud to be racing again this year."

ROLEX AND DAYTONA
Rolex’s connection to Daytona harks back to an even earlier time when Daytona Beach was considered the capital of land speed records in the early 20th century. The long, flat and very firm Daytona Beach played host to 14 land speed records in the early part of the 20th century – five of which were set by Sir Malcolm Campbell, including the fastest official record there of 276mph in 1935 at the wheel of his mighty Bluebird with a Rolex on his wrist.

In 1992 Rolex formalized this long-standing association with Daytona and the Speedway becoming the Official Timepiece and Title Sponsor of the 24-hour Daytona classic, further strengthening the link between the race and the Rolex Oyster Perpetual Cosmograph Daytona watch. After 25 years, the brand is now so closely tied to the event that motor sport aficionados simply refer to it as “The Rolex"