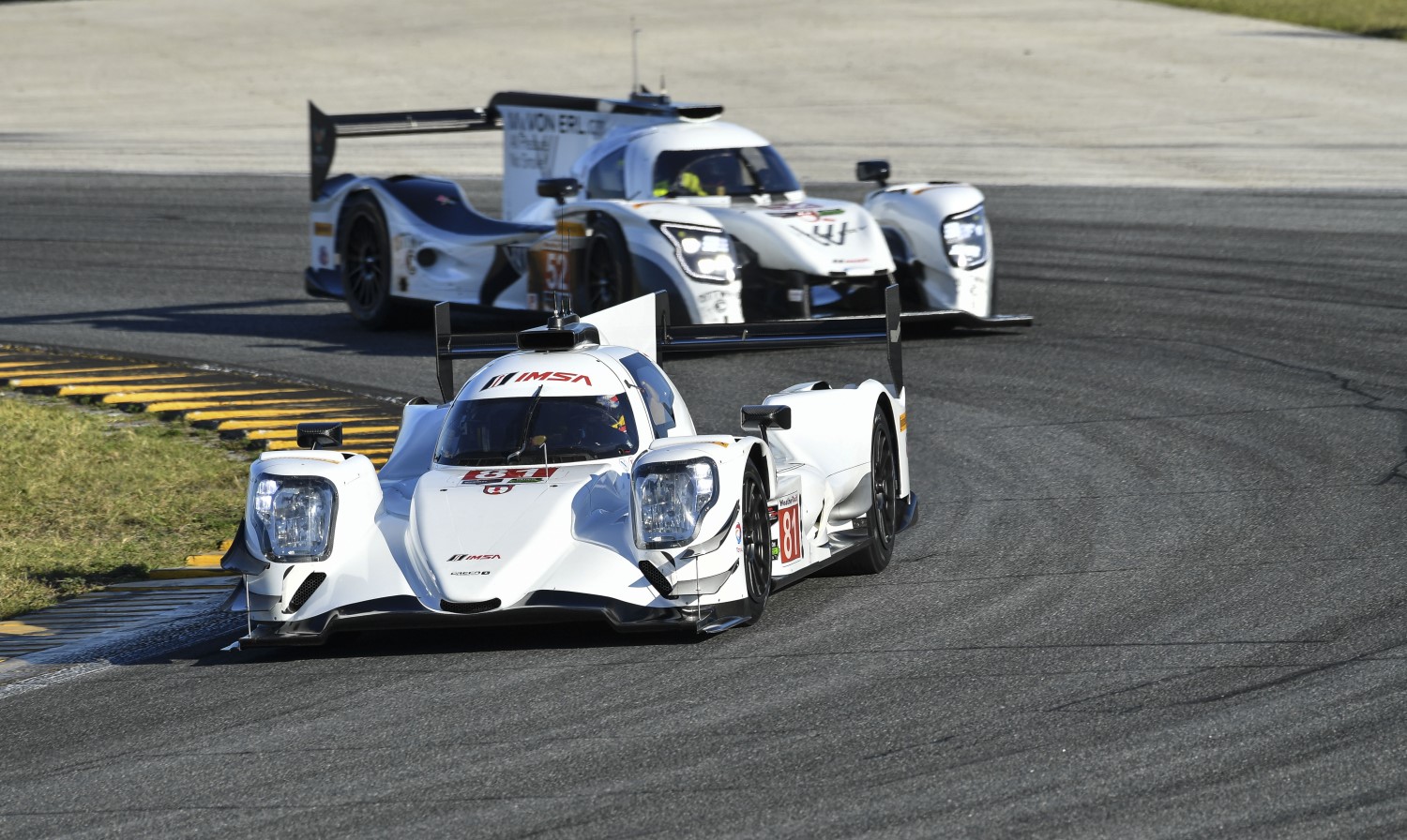 DAYTONA BEACH, Fla. – The Gibson-powered ORECA 07 proved to be the dominant force of the Prototype Class at the Roar Before the Rolex 24 on Jan. 6 – 8. Rebellion Racing's Neel Jani was quickest in four of the first five practice sessions, but couldn't quite top DragonSpeed hot shoe Ben Hanley.

"The driver lineups are impressive, there's not weak team out there," said Hanley. "Everything's new for everybody. It's a 24-hour race and anything can happen, we know that. We've just got to be there at the end and hope we can grab something."

Hanley is brand new to Daytona International Speedway's 3.56-mile road course – as is Jani – and finds that it lives up to its reputation.

"It's fantastic," he said. "The first impression when you drive close to the place, you see the huge grandstand and you see the banking when you come into the track. It's a great experience to drive around here. The whole week has been an eye-opener for me and a good first few days racing in America."

[adinserter name="GOOGLE AD"]In GT Le Mans (GTLM), the Ford Chip Ganassi Racing Ford GTs would not be beaten at the Roar, with the top three fastest times in class set by Ford drivers. Ganassi's IndyCar stars Tony Kanaan and Scott Dixon were second and third on the charts, but it was 2016 WeatherTech Championship runner-up Ryan Briscoe who was quickest in class for the weekend in the No. 67 Ford GT. He set a 1:44.380 during Sunday morning's WeatherTech Championship session.

Making up fourth through sixth quickest in GTLM were drivers from BMW, Ferrari and Corvette Racing.

In GT Daytona, Porsche factory driver Sven Muller took the No. 59 Manthey Racing Porsche 911 GT3 R to the top, with the quickest time of 1:46.810 also set on Sunday morning.

C360R GRABS ATTENTION IN CONTINENTAL TIRE CHALLENGE GARAGE WITH NEW MCLARENS, AUDI: While Porsche Caymans, Aston Martins and Ford Mustangs have been prevalent in the IMSA Continental Tire SportsCar Challenge over the past several years, the McLaren GT4 is a newcomer to the Grand Sport (GS) class in 2017.

The GS entry list at the Roar featured an impressive 21 entries for the non-mandatory season-opening test, including six of the new McLarens built to international GT4 technical specifications. GT4 cars are eligible to compete alongside some "grandfathered" previous-generation GS cars in 2017 ahead of exclusive GT4 technical regulations to be used for GS in 2018.

One of the McLaren GT4 "early adopters" is longtime Continental Tire Challenge competitors, C360R. The team fielded a pair of McLarens at the Roar – the No. 76 Alpha Clone/Aero Paint/Audrain Motorsport-backed machine for Paul Holton and Matt Plumb, and the No. 77 Aero Paint/Misahara/Pfaff McLaren GT4 for Matthew Keegan, Nico Rondet, Bob Doyle and Jeff Westphal.

Among them, Plumb turned McLaren's fastest lap of the weekend on Saturday afternoon at 1 minute, 56.457 seconds, making him the 10th fastest driver of the Roar in the GS class.

"We're still working through some stuff," said C360R Team Principal Karl Thomson. "They're great cars, but it's been good to test. I didn't think we'd be ready for the Roar, and there's a bunch of stuff we still have to work through, partially on the electronic side, partially on fuel consumption and partially on tire wear, so again, these are very new cars for us.

"They run in a different specification than we're used to, ‘cause there's so much of GT4 that's a little different than what we've been doing previously in GS, but I think everybody in the pit lane is doing exactly the same thing because all of these cars are GT4 cars now. But I think GT4 is going to be good for GS as we see the arrival of new cars from BMW, Mercedes, Audi. This is going to be a really sexy-looking paddock."

Thomson noted that the team's No. 77 McLaren arrived by air on Wednesday night, but still managed to participate in the test. The team – which hasn't missed a Continental Tire Challenge race since 2004 – already has committed to fielding both the No. 76 and 77 entries for the full, 10-race Continental Tire Challenge season, in addition to the No. 75 Audi S3 in the Street Tuner (ST) class.

Speaking of Audi, C360R also was responsible for the Daytona appearance of the new Audi RS3 LMS race car built to international Touring Car Racing (TCR) specifications. The RS3 was on display in C360R's Continental Tire Challenge garage during the weekend and participated in on-track photo and video sessions. IMSA officials continue to study the possibility of introducing TCR-spec machinery to the Continental Tire Challenge as early as 2018.

"What we had here in our garage was Audi's premiere of that," Thomson explained. "They're calling it the ‘America Clubsport.' It'll be eligible to run in another series in its existing class this year. I think that'll be interesting to get a handle on what that car is like.

"The real key there is, Audi has brought this car and it's great. Everybody likes it. There's as much interest here as anything else in the paddock, simply because it looks like a DTM car. It's got these wide fenders and stuff. It looks really cool."

HISTORY HEATS UP FOR CORVETTE RACING: During Sunday morning's practice session, Corvette Racing's Marcel Fassler stopped the No. 4 Corvette between Speedway 1 and 2, where the car proceeded to catch fire.

"During this morning's practice session at Daytona, the No. 4 Corvette C7.R experienced an issue with a fuel line that allowed fuel to escape, contact a hot surface and ignite," said Jim Campbell, Chevrolet U.S Vice President, Performance Vehicles and Motorsports. "The fire was quickly extinguished, and the damage was limited to the engine compartment of the car."

FÃ¤ssler received a mandatory ride to the infield care center, where he was quickly evaluated and released by IMSA medical staff. The sister No. 3 car was withdrawn from final practice as well as a precaution, but the team is confident that both cars will be ready to race come the Rolex 24 At Daytona at the end of the month.

It was a case of deja vu for Corvette Racing, as the No. 4 caught fire during the 2016 Roar. Time will tell if additional history will repeat for the team this year, as well the No. 4 Corvette went on to win Daytona, Sebring, Lime Rock (Corvette Racing's 100th win), Road America en route to the 2016 WeatherTech Championship GTLM title.

DAYTONA HOSTS LARGEST SCOUT DAYS EVENT, GIRL SCOUTS INSPIRED BY FEMALES IN IMSA: More than 3,000 Boy Scouts and Girl Scouts of America took part in Scout Days at Daytona International Speedway this weekend, getting to experience the sights and sounds of IMSA racing. The scouts bravely endured a stormy Friday night and Saturday morning, followed by cold temperatures Saturday afternoon into Sunday, but eagerly made the most of the adventure.

Among the activities the Scouts took part in were garage tours, scavenger hunts, geocaching and fishing at Lake Lloyd and earning an Automotive Maintenance Merit Badge at a demonstration by Daytona Toyota on basic vehicle maintenance techniques.

"It was a great weekend hosting thousands of Boy and Girl Scouts from the Southeast for our annual Scout Days during the Roar Before The Rolex 24," said Daytona International Speedway President Chip Wile. "Scouts enjoyed a number of fun activities while IMSA teams participated in testing sessions on track. It's exciting to see Scout Days continue to grow and we look forward to hosting our next event later this month-the prestigious Rolex 24 At Daytona."

Saturday afternoon, IMSA and Daytona International Speedway hosted a Women in Motorsports Panel with a star-studded lineup encouraging Girl Scouts in attendance to follow their passion regardless of industry.

Shea Adam, IMSA Radio Reporter, moderated the 40-minute session with Ford mechanic Jessica Mace, Acura driver Katherine Legge, and Scuderia Corsa Ferrari defending GTD driver champion Christina Nielsen as guests. While the ladies enjoyed several jokes with each other throughout the talk, they conveyed a message of perseverance and confidence to the girls in the audience.

"You have to learn not to care what others think," said Legge during the question-and-answer session. "There can be a double standard, so you have to work even harder than everyone else to prove you deserve to be there."

Added Nielsen, "You can't give people the reaction they want because it will just add fuel to the fire. We're here because we worked hard and kept believing, and surrounded ourselves with people that believed in us and didn't care that we were girls."