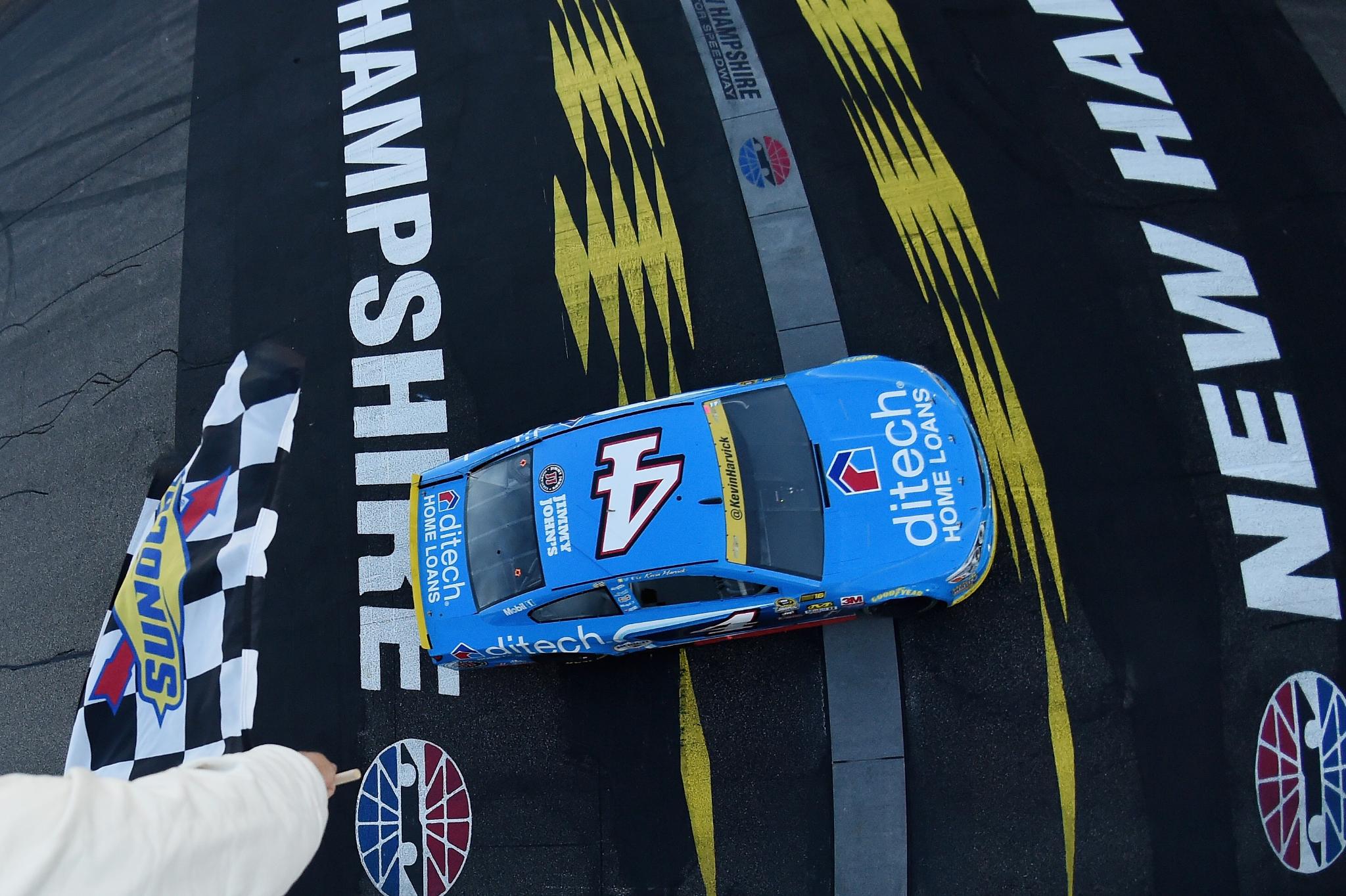 Remember last week, when Kevin Harvick was trapped a lap down at Chicagoland Speedway, finished 20th and fell out of the top 12 in the Chase for the NASCAR Sprint Cup standings?

Remember last year, when Harvick crashed at Chicagoland and ran out of fuel while leading at New Hampshire Motor Speedway and had to win at Dover to advance in the Chase?

That's all moot, now that Harvick redeemed himself with a victory in Sunday's Bad Boy Off Road 300 at New Hampshire, the second race in the Chase.

Surging ahead of Matt Kenseth after a restart with six laps left in the 300-lap event at the 1.058-mile track, Harvick pulled away to win by .442 seconds and joined Chicagoland winner Martin Truex Jr. in the Chase's Round of 12.

"One of our main goals this year was to not stress ourselves out so bad," said Harvick, who won last year's Dover race to escape the Round of 16 in his last opportunity. "I feel like the performance of the car and the things that we're doing are good enough to be competitive, and we just need to not make mistakes and go from there."

[adinserter name="GOOGLE AD"] Harvick got his opportunity to win the race when Ricky Stenhouse Jr. and Reed Sorenson collided on the backstretch on Lap 291 to bring out the sixth and final caution of the race.

Starting on the inside lane and timing the restart perfectly, Harvick stayed side-by-side with Kenseth entering the first corner and cleared Kenseth's No. 20 Toyota through Turn 2. Kenseth was unable to get back to the rear bumper of Harvick's No. 4 Stewart-Haas Racing Chevrolet over the final six laps.

"Man, that worked out really good," said Harvick, who won for the second time at the Magic Mile, the third time this season and the 34th time in his career. "The car was pretty good on the restarts. Once we got clean air there at the end, it wound up being really good up front. I'm just really proud of our team. They did a great job."

NASCAR admonished Kenseth before the final restart not to slow down in the restart zone, as the sanctioning body believed he had done on the previous restart, when Kenseth held off Truex for the lead.

Then Kenseth second-guessed the way he handled the final restart with Harvick beside him.

[adinserter name="GOOGLE AD"] "I saw Kevin at my door, and I should have known better," Kenseth said. "I should have went deep in the box and waited, and the acceleration was probably better down there anyway, but I didn't. I went right at the first line, and he anticipated a little bit of that and got rolling good through the gears, and then I got through the gears bad. I spun the tires in second (gear), I spun the tires in third, so I had a really bad restart besides all that."

Kyle Busch finished third behind Harvick and Kenseth after pitting for fresh tires under caution on Lap 265 and charging through the field. Brad Keselowski ran fourth and took over the Chase points lead by one point over Truex, who led a race-high 141 laps in a seventh-place run but wore out his tires trying to pass Kenseth after a restart on Lap 269.

Harvick escaped the bottom four in the standings, and that left Jamie McMurray, Austin Dillon, Tony Stewart and Chris Buescher all needing to improve their positions to avoid elimination next Sunday at Dover International Speedway.

McMurray and Dillon (19th and 16th, respectively, at New Hampshire) are five points behind Larson in 12th place. Stewart is 11 points back of Larson after a 23rd-place run on Sunday, and Buescher trails by 30 points, needing a Dover miracle.

‘I just want to thank all our sponsors and everyone at the shop who works on the Stewart-Haas Racing cars. Man, that worked out really good. The car was pretty good on the restarts. Once we got clean air there at the end, it wound up being really good up front. I'm just really proud of our team. They did a great job."

DID VOICING YOUR OPINION ABOUT THE PREVIOUS RESTARTS MOTIVATE YOU AT THE END TO GET THAT BEST ONE?

"We talk about that stuff all the time. For me, it was just a smooth restart. I just didn't want to spin the tires. I don't know what happened to him, or if I just timed it right. It worked out good when we got to Turn 1."

FROM HAVING A BAD DAY LAST WEEK, HOW DOES IT FEEL TO COME TO VICTORY LANE HERE?

"Yeah, that was a game of inches last week. We wound up getting a lap down there and I had a good car. I had a fifth of sixth place car, and just wound up not being where we needed to be. But all in all, we wound up where we should have been last year, this year."

YEAH, YOU DON'T HAVE TO GO DO DOVER AND WIN THIS TIME. WHAT DOES THAT FEEL LIKE?

"Oh, it's definitely going to be nice. One of our main goals this year was to not stretch ourselves out so bad. I feel like the performance of the car and the things that we're doing are good enough to be competitive, and we just need to not make mistakes and go from there."

SO, HOW IS THE HEART RIGHT NOW?

"I'm just excited. I was content with where we were. But, once you get up there in the front like that, you've got to take a chance to try to win."