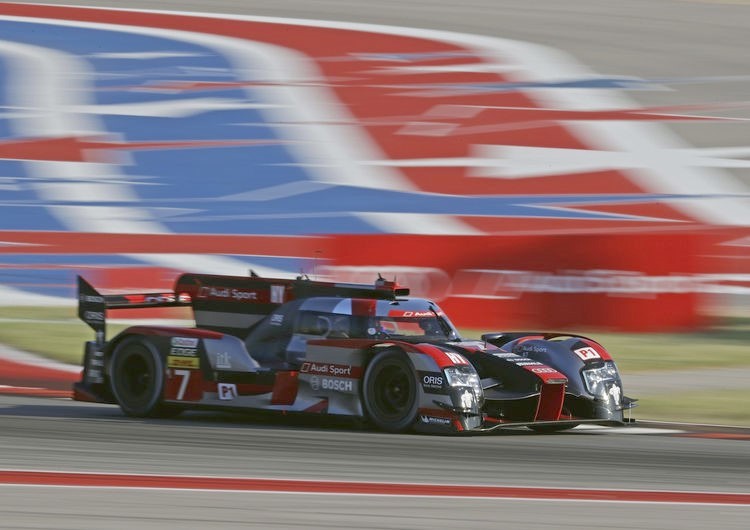 For the fourth time this year and for the third time in succession Audi has achieved the best starting base: the two Audi R18 cars locked out the front row of the grid for round six of the FIA World Endurance Championship (WEC).

As previously at Silverstone and the Nurburgring, car number 7 was unbeatable in qualifying. Marcel Fassler/Andre Lotterer/Benoit Treluyer (CH/D/F) will be starting the race at Austin (Texas) on Saturday from pole position. "The car felt great," said Lotterer, who set the fastest single time of 1m 45.703s. "This is fantastic for the whole squad that has been working hard lately." Marcel Fassler completed the result — number 7 posted the best time of all entrants at 1m 45.842s. "Our Audi simply felt perfect in all turns. That was huge fun," said the Swiss.

The number 8 sister car had to admit defeat by a very narrow margin, as Lucas di Grassi/Loic Duval/Oliver Jarvis (BR/F/GB) were lacking only 141 thousandths of a second in the end. "We were the fastest in all three free practice sessions," said Oliver Jarvis. "Obviously, we’d have liked standing in front again as we previously did in Mexico, but I just didn’t catch a clear lap." Loic Duval, who achieved the second-best single time of all drivers, added: "Unfortunately, we had a little too much understeer. For the team it’s great that both Audi cars are at the very front. Now it’s about being top-class in the race as well."

Head of Audi Motorsport Dr. Wolfgang Ullrich was happy about the performance shown by his squad: "The fourth pole position in the sixth race shows how fast the Audi R18 is in its current version. Congratulations to our drivers who have achieved this result. We have an important and difficult race before us. A victory would be a sweet reward for the hard work of the entire team."

Stefan Dreyer, Head of LMP at Audi Sport, emphasizes how hard the conditions at the Circuit of the Americas were: "We had air temperature of 35 degrees centigrade and tarmac of 45 degrees in qualifying. It was simply great to see how good our drivers were in these difficult conditions. I also take my hat off to the performance of the whole team because especially the last few days were hard work. We were in front in each session. Now we’re going to leave no stone unturned to be there on Saturday as well."

[adinserter name="GOOGLE AD"]The two Porsche 919 Hybrids will start from positions three and five on the grid for the sixth round of the FIA World Endurance Championship (WEC) in Austin, Texas. The reigning world champions, Timo Bernhard (DE), Brendon Hartley (NZ) and Mark Webber (AU), qualified in third. The current championship leaders, Romain Dumas (FR), Neel Jani (CH) and Marc Lieb (DE), will start the six-hour race from fifth on the grid, after having lost one position when Dumas’ fastest lap time was taken away because of exceeding track limits. Audi took the front row.

The race at the 5.513 kilometre long Formula One circuit will start on Saturday at 17:00 hrs local time (midnight in central Europe). It is expected to be a tough battle for men and machines: Ambient temperatures are clearly over 30 degree Celsius and it is an extra challenge to race from daylight through twilight into the dark – and all this in a very competitive environment in the battle for the championship and with heavy traffic, in which the fast Le Mans Prototypes have to find their way to constantly lap slower GT cars.

In the WEC the average of the respective best laps of two drivers counts for the grid position. In Texas Bernhard/Hartley (car number 1, position 3, 1:46.560 minutes) and Dumas/Jani (car number 2, position 5, 1:47.331 minutes) were the qualifying drivers.

The 6-hour race will start on Saturday at 17:00 local time. TV channel Eurosport will be airing live full-length-coverage during the night from Saturday to Sunday from 00:00 to 06:15 (CEST) in Germany. Audi will be keeping its fans up to speed on Facebook (AudiSport) and Twitter (@audisport).