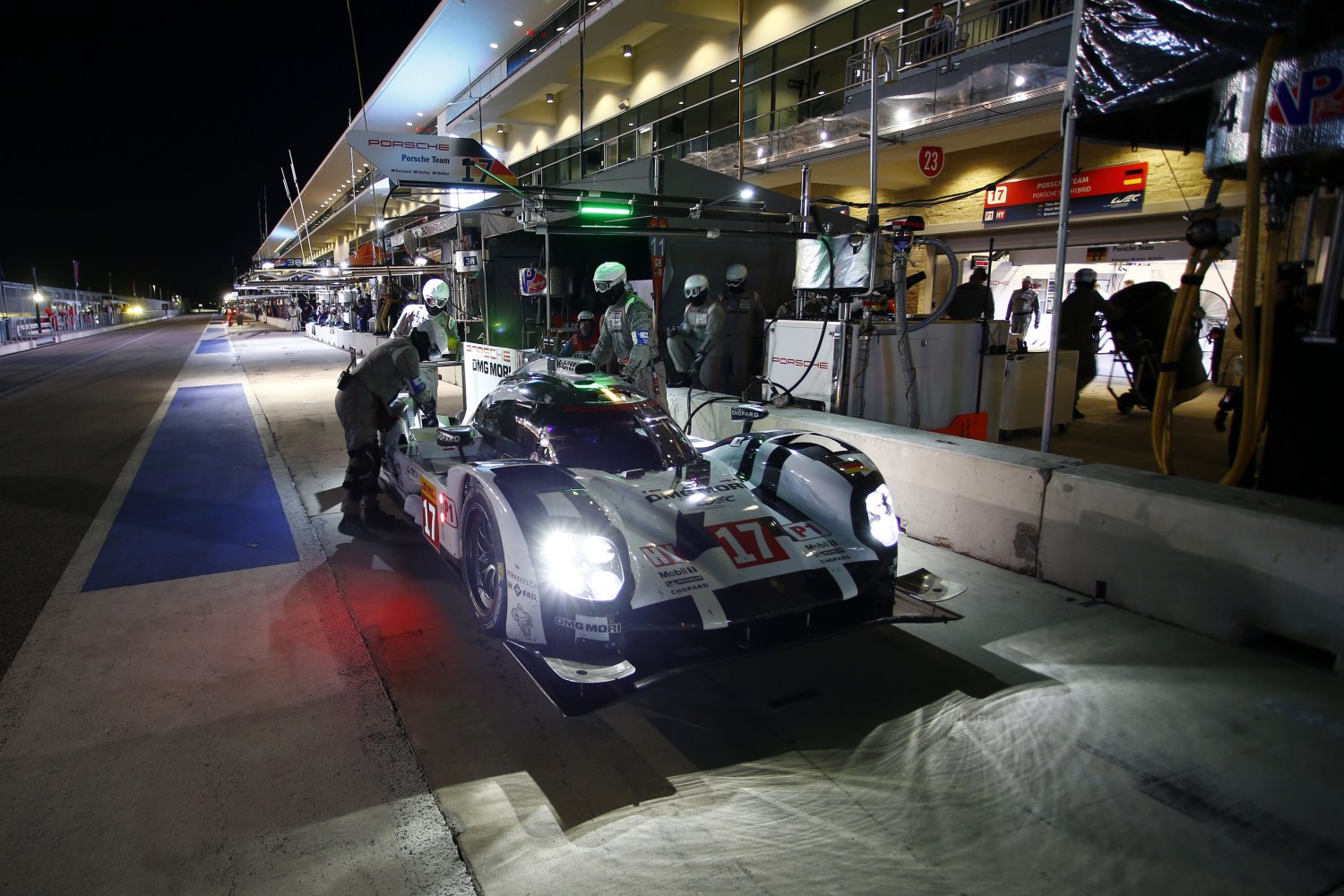 Only two weeks after the Porsche 919 Hybrid's winning debut race in Mexico City, the FIA World Endurance Championship (WEC) heads to Austin (Texas, U.S.). On Saturday, September 17th, the sixth of nine rounds of the 2016 WEC will take place on the Circuit of The Americas (COTA) — for Porsche it is the next stop on its title defense mission.

The demanding track is known as the favorite of the modern Formula One circuits. High ambient temperatures can be expected and the timing for the race provides an extra challenge: The six-hour race will start at 17:00 hours with sunset being at 19:32 hours.

Porsche leads the manufacturers' world championship after having won four races in 2016 – Silverstone, Le Mans, the NÃ¼rburgring and Mexico City. It is the third season for the innovative Porsche 919 Hybrid. During this year's five championship rounds Porsche has scored 201 points, Audi is second (158) and Toyota follows in third position (112).

In the drivers' world championship, this year's Le Mans winning trio of Romain Dumas (FR), Neel Jani (CH) and Marc Lieb (DE) has extended its lead to 41 points ahead of the best placed Toyota drivers.

The Weissach developed Porsche 919 Hybrid competes in the highest category of the 31 car field, which is the class one Le Mans prototypes (LMP1). The two-time Le Mans winning car produces a system power of over 900 HP (662 kW). Its combustion engine is a ground breaking downsizing motor: the very compact two-liter V4 turbocharged petrol engine drives the rear axle with almost 500 PS (368 kW).

Two different energy recovery systems – brake energy from the front and exhaust energy – feed a lithium ion battery that, on command, passes on the energy to an E machine to power the front axle with an extra boost of over 400 PS (294 kW).

"This year's World Championship has shown an extremely tight competition," said Fritz Enzinger, Vice President LMP1. "These long distance WEC races are close battles on the highest sporting and technical levels right up to the very last minute. In Mexico the top four LMP1 cars qualified within three tenths of a second and after the race all three manufacturers had a crew on the podium. We are the hunted and by no means can we ease up in our title defense."

Team Principal Andreas Seidl added: "In 2015 our Porsche 919 Hybrids dominated in Austin, but this is not what we can expect to happen this year. Nevertheless, we believe that COTA's fast curves will suit our 919 well. Austin is always especially demanding for the drivers and the entire team. Practice sessions are late, the race goes on until 23:00 hrs and normally it is very hot."

Quotes before the race:

Drivers Porsche 919 Hybrid number 1
Timo Bernhard (35, Germany): "COTA for me is the most beautiful of all new circuits because it has a great mixture. Sector one is especially interesting. After the steep start-finish straight the first left hander is a blind corner. Then some flowing esses follow. If you make a mistake there you suffer from it for a long time. In the first sector all the corners are somehow connected to each other. The middle sector offers good opportunities for overtaking under braking, and the last sector is very tight. You definitely have to position your car carefully. I'm always looking forward to racing in the U.S. I did this for quite some years for Porsche and had a lot of success in the ALMS. I think the sports car culture in the States is great."

Brendon Hartley (26, New Zealand): "Austin is a great city that we all love returning to. COTA is my favorite of the new style F1 tracks, because it has a little bit of everything. We have good memories from our very dominant victory last year. After the race in Mexico I went to meet my brother and a friend in the San Francisco area to be a tourist for a couple of days. Then focusing again on Austin: Sights are set on the middle step of the podium."

Mark Webber (40, Australia): "It's always good to race in America. In Austin my first experiences were in a Formula One car, which is a little bit more agile, especially in the first sector, but the biggest difference is that in a Grand Prix you don't have to deal with the permanent traffic of cars to lap. The track in Austin is very demanding and a beautiful one for our prototypes. Different to in Mexico City, at COTA the 919 can really open its speed up. I also love night racing. Our cars are able to do that and it creates a bit of a Le Mans feeling. Probably we will not be as dominant as in 2015 in Texas, but, of course, car crew number one wants to repeat last year's victory. COTA can be hard work in several regards. The temperatures are extreme and the weather can be very changeable as well."

Drivers Porsche 919 Hybrid number 2
Romain Dumas (38, France): "COTA is a great track with a nice atmosphere and good mixture of very fast curves, long straights and tighter corners – it is like it is tailor made for our Le Mans prototype. After we were strong there the last two years, I hope we will be in good shape again this year. The weather conditions can be unpredictable. Two years ago we had a tremendous downpour. If it stays dry we have to be careful with tire wear."

Neel Jani (32, Switzerland): "In Texas we will be back at sea level and have more air to breathe. But the biggest challenge is the heat. At the moment it looks like we can expect 30 degrees Celsius or even more. Different to the Mexico City circuit, COTA is fast and flowing and I really like that. Last year our team was very strong in Austin, but we have seen the competition is getting tighter and tighter."

Marc Lieb (36, Germany): "The fast corners in the first and the last sectors make the Austin circuit a real high downforce one, and I think this should suit our car. Ambient temperatures and humidity are always extreme and tough for us drivers. In 2014 and 2015 the 919 Hybrid was very competitive in Texas. But in 2015 an electrical problem cost us the race win – and ultimately the chance to fight for the drivers' title. In 2014 we also had a technical problem. Therefore COTA is unfinished business for us and this year we want to make it onto the podium."

– The six-hour race on the Circuit of The Americas (COTA) is the sixth out of nine rounds of the 2016 WEC and starts on September 17 at 17:00 hrs local time (midnight in Central Europe).

– The official WEC App can be downloaded free of charge in its basic version and can be extended (not free of charge) by a live stream. Several live features, such as on-board cameras, timing and GPS tracking, are implemented in the Porsche Motorsport App (free of charge) and at porsche.com/fiawec.

– In 2015 Jani/Lieb took pole position with an average lap time of 1:46.211 minutes. The overall fastest lap was done by Jani in 1:46.018 minutes. Hartley/Webber were second on the grid with a qualifying time of 1:46.375 minutes. (In the WEC the average of the respective best laps of two drivers counts for the grid position.)

– A lap on the Formula One circuit in Austin, that was opened in 2012, is 5.513 kilometers and has 20 corners. The circuit goes anti clockwise.

– At normal race speed (no safety car) the Porsche 919 Hybrid is due for refuelling after every 31 laps at the latest.

– Refuelling and changing tires may only be done sequentially, not at the same time. Only four mechanics may work simultaneously when changing tires and may use only one wheel gun. That takes a lot longer than in Formula One, for example.

– The drivers are normally only changed when new tires are needed.

– The WEC efficiency regulations limit the amount of energy that can be used per lap. In Austin the Porsche 919 Hybrid can use 5.01 megajoule of electrical power from energy recovery systems and 1.411 kilograms or 1.930 liters of petrol.

– These different types of tires can be used: three different compounds of slick tires for dry conditions, a hybrid tire (no profile either but softer cover) for mixed conditions and wet weather tires. 6.5 sets of dry weather tires are available per car for qualifying and the race.