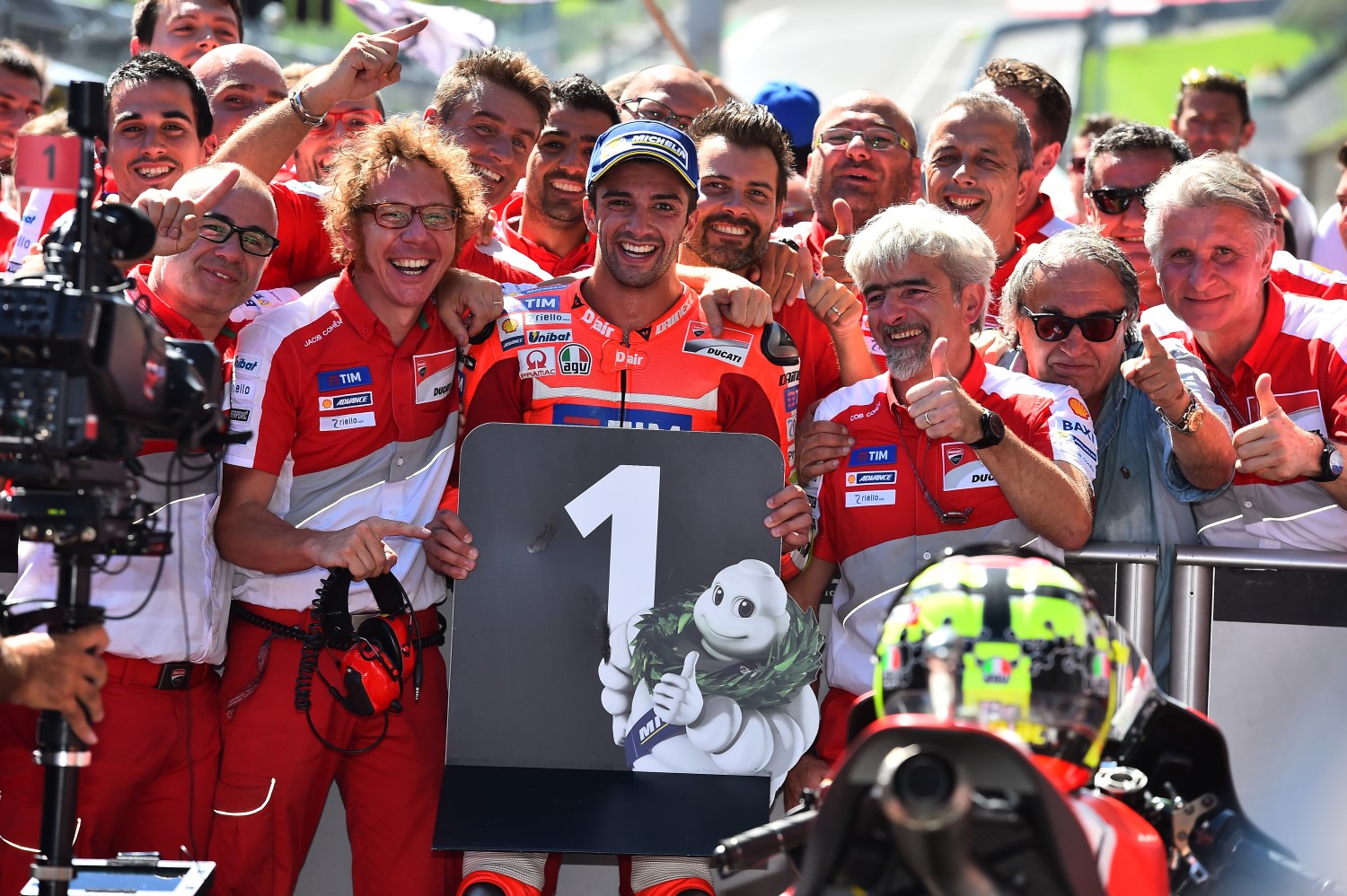 Starting from pole position, Iannone was the only rider to choose the new medium compound rear Michelin Power Slick, which had been especially developed for the Austrian circuit following a recent test held there. The Italian got the holeshot and led for most of the first-lap until Valentino Rossi (Movistar Yamaha) passed him just before they crossed the stripe for the first time.

An incredible battle then ensued at the front, as those two were joined by four more riders in the shape of Andrea Dovizioso (Ducati Team) Jorge Lorenzo (Movistar Yamaha), Marc Marquez (Repsol Honda) and Maverick Vinales (Team SUZUKI ECSTAR). With all the riders battling for positions it wasn't long before the lead changed hands as Dovizioso reeled in his team-mate on lap-10.

[adinserter name="GOOGLE AD"]The Italian – who today became the youngest rider to make 250 Grand Prix starts – held the lead for 10 more laps until he was hunted down by Iannone and passed on lap-21. Despite Dovizioso's best efforts, Iannone used his Michelin tires to great effect in the closing stages as he recorded the race's fastest lap on the 24th circulation and almost bettered it on the final lap to further confirm the durability of the latest compounds.

He brought his Ducati home in front of Dovizioso to give Ducati its first MotoGP victory since 2010 and the Italian marque's first one-two since 2007. Iannone's victory also made him the fifth different MotoGP winner this season, a feat that hasn't happened since 2009.

Behind the front two the battle was just as intriguing as the Yamaha's of Lorenzo and Rossi stayed in close contention throughout the 28-lap race. Lorenzo just got the better of his team-mate to secure the final podium position, with current championship leader Marquez taking fifth, just in front of Vinales. Dani Pedrosa (Repsol Honda) took seventh, with Scott Redding (OCTO Pramac Yakhnich) racing to eighth and the position of First Independent Team Rider.

Today's event was held in clear and sunny conditions with track temperatures reaching 46Â°C, a statistic that further underlines the tires' all-round performance on this technical and abrasive circuit. A crowd of 95,000 packed the circuit, taking the total of spectators to almost 216,000, making this the biggest race weekend of the season so far.

Alex Espargaro retired from the race in the closing laps after battling a broken finger, while Eugene Laverty crashed on the final lap while fighting for a top 10 finish.

Australia’s Jack Miller was ruled out of the race after suffering hairline fractures to his T6 vertebra and a broken right wrist after a crash in warm-up.

Marquez continues to lead the world championship standings with a 43 point margin over Lorenzo ahead of next weekend’s Czech Republic Grand Prix.

Michelin and the rest of the MotoGP field now makes the short trip to the neighboring Czech Republic as it heads to Brno for the second race in this doubleheader and round 11 of the championship on Sunday 21st August.

"Michelin has worked very well from the test that we had here and they changed the tires to give us ones that are very strong and had competitive grip, so I am very happy with that. Always this year, race-by-race, test-by-test and step-by-step Michelin has improved and they are coming better all the time, which is good for everybody."

"We are very pleased with the weekend here in Spielberg, it has been very positive and showed that our tires work well in many different conditions. At the start of the weekend on Friday it was very cold with track temperatures of 15Â°C, but for today's race it was almost 50Â°C and our tires reacted very well. Today's race was always believed to be a dual between the Ducatis – and so it proved – but the two Yamaha's closed the gap over the weekend, so it made for a very competitive and interesting afternoon.

"To see the fastest laps recorded towards the end is testament to what we are doing and to have a 28-lap race in those conditions without a single crash due to tires, is also an extremely positive indication of the direction we are going in. We now move to Brno where we have some new tires which we will be using for the first time since the test at Barcelona and we hope that these will give yet another step in performance and provide the riders with even better traction."