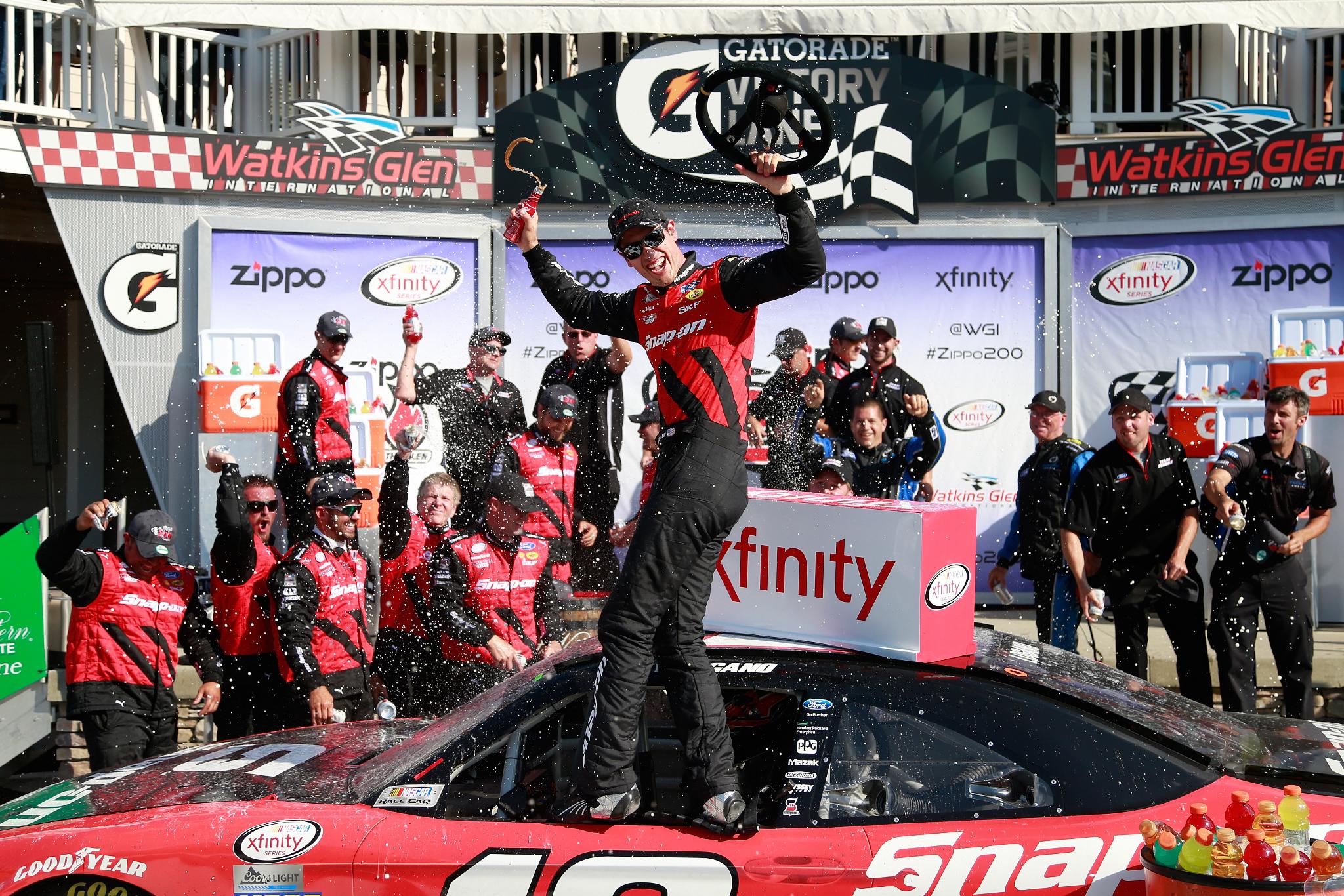 The driver of the No. 12 Ford won Saturday's NASCAR XFINITY Series race at Watkins Glen International from the pole, giving Team Penske its first victory in what has been a disappointing season so far.

The win in the Zippo 200 was the second straight at the 2.45-mile road course for the 26-year-old driver, who led 67 of 82 laps and drove his car to the limit, keeping teammate Brad Keselowski behind him until a broken track bar mount forced Keselowski's No. 22 Ford out of the race after 79 laps.

Keselowski's problem gave Logano some breathing room. Though Paul Menard was making up ground in the closing laps, he finished second, 1.517 seconds behind Logano, who collected the 26th victory of his career.

The win was the sixth for Team Penske in the Zippo 200. In addition to Logano, Kurt Busch won the event twice, and Ryan Newman and Keselowski once each.

"Brad gave me a run for my money, that's for sure," Logano said of Saturday's race. "He was just as fast as me, maybe faster. I never ran so many qualifying laps inside the car. I was running as hard as I possibly could, and I wasn't sure if my car would last, running that hard, but she held together just long enough.

"I couldn't be more proud to be here in Victory Lane. This is big for Team Penske on the XFINITY side of things. Great to get a win for them."

Logano swept the XFINITY and Sprint Cup weekend at the Glen last year.

Keselowski finished 24th and understandably had mixed feelings about the outcome.

"It looked like a bad weld broke," he said of the track bar issue. "I don't know what to say about that. You can't win races in the garage. Joey and I were both really fast, and if either one of us got in the lead it was obvious we were going to drive away.

"That's something to be really proud of. We had very fast Ford Mustangs today, and congrats to Joey on the win. It's good for the program to see Team Penske get in Victory Lane today. I wish it could have been us, but I am happy for Joey and all those guys."

[adinserter name="GOOGLE AD"] The race featured six cautions for 18 laps. The most massive incident was an 11-car pileup in the esses on Lap 18 that eliminated Kyle Busch, who is attempting to win a race on all active XFINITY tracks at which he has competed. Currently, he lacks only Watkins Glen and Pocono to complete the feat.

Saturday's race also had a healthy dose of the bizarre. On Lap 59, Derrike Cope's No. 70 Chevrolet slowed and came to a stop in the runoff area beside the Inner Loop. After a few seconds, an explosion rocked the car, blowing the hood off its pinions and sending a billow of black smoke skyward. Cope was unhurt in the incident.

Tweeting as he watched the broadcast, NASCAR Sprint Cup Series driver Dale Earnhardt Jr. wrote: "Reminds me of when I used to put M80s in the models I built."

Cope was unhurt in the incident but was baffled as to the cause of the explosion.