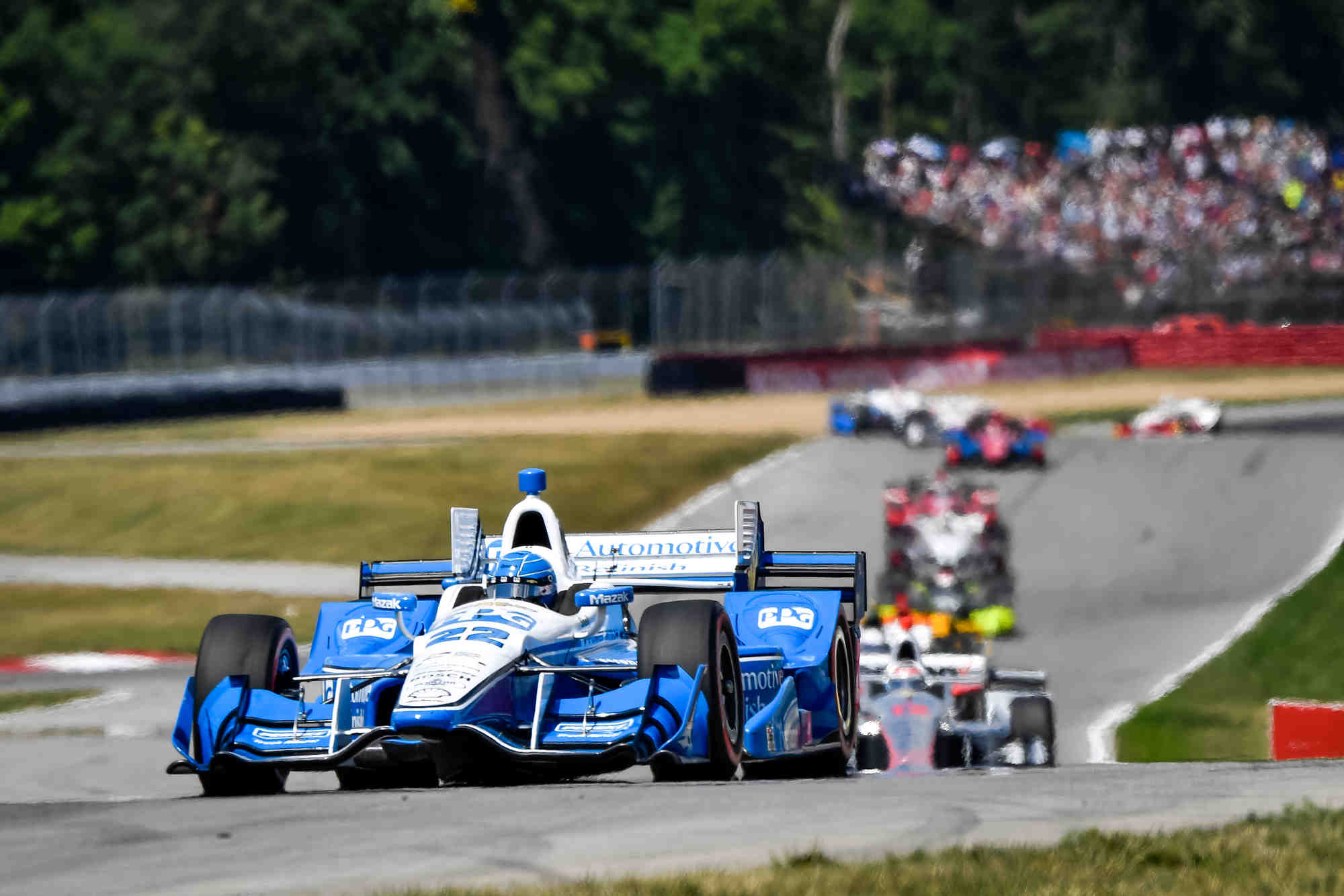 Two weeks ago after Toronto, I mentioned how we were entering the stretch run of the 2016 Verizon IndyCar Series Championship. And to me, the three players to keep an eye on were championship leader Simon Pagenaud, the suddenly hot Will Power, and reigning series champion Scott Dixon.

Dixon, of course, endured a frustrating race in Toronto. Having dominated from pole, the Kiwi was 'caught out' on a yellow flag and forced to pit. Power cycled to the front, while Dixon came home 8th. Although the championship gap between Dixon and Pagenaud was sizable, I wrote that you couldn't discount the Kiwi. He and Target Chip Ganassi Racing have of course tormented Team Penske many times in the past. Plus, with the frustration of Toronto fresh in his mind and his championship hopes reaching a critical tipping point, Dixon had all the makings of a wounded animal if you will. With his favorite playground Mid-Ohio up next, the stage was primed for Dixon lashing out on the rest of the IndyCar field if you will.

And I suppose, from a certain perspective, I was right. Dixon did lash out at this weekend's Honda Indy 200 at Mid-Ohio. But it wasn't with the cool stealth of a quiet assassin, rather with desperation. The Kiwi made an uncharacteristic mistake in qualifying Saturday and had to start the race 11th. Then Sunday, trying to get past Helio Castroneves, who endured a miserable weekend, made an uncharacteristically ambitious move into the Keyhole. The resulting contact ended Dixon's day, and probably any realistic hopes of repeating as series champion for the first time in his storied career.

Of course, there is another major factor complicating a Dixon repeat.

Through much of the Dixon-Dario Franchitti years, Chip Ganassi Racing has clearly gotten the better of Team Penske, there's no doubt Team Penske has the edge in 2016 due to their better shock program. Will Power has finished first or second in each of the last five races. And then there's Simon Pagenaud.

The driver of the No. 22 Team Penske Chevrolet, of course, started 2016 on fire winning three of the first five races and finishing second in the other two. However, a difficult day at the Indianapolis 500 seemed to interrupt the Frenchman's fortunes somewhat. Although Pagenaud was still qualifying and running at the front, nagging failures such as running out of fuel on the final lap at the first Detroit race and losing power in the closing laps at Road America slowly eroded into Pagenaud's championship lead. And entering Mid-Ohio this weekend, it was Power with the momentum, and a wounded Dixon lurking in the background. How would the Frenchman respond?

As we covered, Dixon's troubles eliminated him as a threat. Power was a different story.

While Pagenaud got out to the lead, an untimely yellow in the first stint (we'll get to the strategy mistakes Team Penske keeps making shortly), cycled Mikhail Aleshin (we'll get to him too) to the front. And worse in terms of the championship, Power got past Pagenaud.

On the one hand with Dixon, Castroneves and Josef Newgarden all having tough days, the Frenchman could have played patty cakes and not gotten too racy with the notoriously aggressive Power. That would have been the smart tactical play.

But as I've written all year, the brilliance of Pagenaud has been not his finishes as much as his ability to adapt to the given situation – a racing Swiss Army Knife, if you will.

And in this case, Pagenaud was staring down the gun barrel of Power winning 4 of the last 5 races. As we know, Power has long been a momentum driver, known to thrive on confidence. So while Pagenaud could have played it safe and insured himself of the points, strategically, he was wise to take the fight to Power. On lap-66 with an off-strategy Conor Daly leading, the Frenchman orchestrated a ballsy outside pass of his teammate. And when Daly came to pit road on lap-85, Pagenaud was in position for his fourth victory of 2016.

Although it was a banner day for Pagenaud, Mid-Ohio 2016 will be remembered as the one that got away from the likable Russian.

Yes, Aleshin cycled to the lead on pit strategy. But once he was there he showed he belonged. At one point, Aleshin had an 11-second lead on second-place. Of course, an ill-fated release from pit road on what should have been his final pit stop resulted in contact with Josef Newgarden, a penalty and the general unraveling of what could have been the Russian's first career win.

I'll credit Aleshin for being classy in defeat, and not throwing anyone under the bus. Don't look now, but with a 5th at Iowa, 6th at Toronto and a strong run at Mid-Ohio, Aleshin has arguably been the best Honda driver over the past month. We know he's always had the chutzpah to run well on ovals. And I think we can expect him to have a strong run at Pocono, where he finished seventh as a rookie.

I didn't write a column last week so I never got a chance to comment on the news that Target would be ending their sponsorship of Chip Ganassi Racing at the end of 2016.

On the one hand, the decision is clearly a sign of the times not only in IndyCar, but racing in general. Also, think about this: since 2008, Target has been the sponsor on 6 IndyCar championship teams and three Indianapolis 500 winners. In other words, this was not a case of a team not performing for a sponsor. In terms of race results, Target could not have asked for much more ROI from Chip Ganassi Racing. This fact can be interpreted in no other way than a statement that Target – for whatever reason – doesn't see value in IndyCar.

On the other hand, I'm not going all apocalyptical here. For one, sponsors come and go in racing. STP left Richard Petty, Castrol left John Force, and the list goes on. Second, the 27-year partnership between Target and Chip Ganassi Racing was not merely a good partnership but arguably the most storied in Indy car history. With the help of Target, Chip Ganassi was able to start his team in 1990. While Ganassi wouldn't find the winner's circle for five years, once the damn was broken with Michael Andretti winning at Surfers Paradise in 1994, the wins kept coming and the championships followed. Jimmy Vasser, Alex Zanardi, Juan Pablo Montoya, Dario Franchitti and Scott Dixon all won championships for Ganassi. We saw each of the above and a host of others at their very best when driving the iconic Target cars, and with Target, Chip Ganassi Racing became synonymous with excellence in racing.

Yes, Target's withdrawal certainly is layered with undercurrents of concern, which cannot be dismissed. But at the end of the day, this was a fairly tale partnership, unmatched in Indy car racing in my lifetime. While Chip Ganassi Racing lost a very big sponsor last week, let the record show A LOT of people won over the last 27 years – something that should not be forgotten.

Not sure anyone noticed, but 16 Verizon IndyCar Series teams are testing today at Pocono Raceway ahead of the ABC Supply 500 on August 21st. And my question is very simple: why?

Yes, transporting 16 cars, teams and equipment then putting thousands of aggregate miles on the engines, tires, chassis, etc to test has its time and place. But winning Pocono later this month pays a grand total of $30,000. Also, if rumors are to be believed the Pocono event could be discontinued after this year. So, unless there's something I'm not seeing (please contact me if there's something I'm overlooking and I'll correct the record), this just seems like a colossal waste of precious resources in an industry that doesn't have them to squander.

One of the more entertaining NASCAR races of 2016 took place this past Monday at The Tricky Triangle. With inclement weather looming in the latter stages of the race, Bob Osborne, crew chief of the No. 34 Front Row Motorsports Ford decided to keep his driver Chris Buescher on track instead of coming to pit road. Buescher took the lead and shortly thereafter a yellow flag came out for fog. A red flag would follow and ultimately the race was called with the reigning Xfinity Series champion scoring his first Sprint Cup Series win in rather unlikely fashion.

With the win, Buescher has opened the possibility of qualifying for The Chase. Now, the fact we're even talking about Buescher (his next best finish is a 14th) entering the "post-season" on similar terms with Kyle Busch, Kevin Harvick, et al. is in my opinion ludicrous. Still, with respect to this folly of a system NASCAR has designed, FRM may have an intriguing decision on their hands.

See, Buescher must be in the top-30 in points to qualify for The Chase. He currently sits 31st in the standings, while teammate Landon Cassill is 29th. Given that there is a significant payout to making The Chase (rumored to be around $1 million) plus the exposure of qualifying for The Chase, would FRM possibly sit down Cassill (assuming Cassill doesn't otherwise qualify) in the hopes Buescher could pass him in the standings? It would to my knowledge be an unprecedented decision, and certainly one brought about by this ludicrous system. It would also open the can of worms discussion that is team orders in racing, something there is not a lot of in NASCAR.

But without knowing the details of Cassill's contract, if you look at the matter from a purely business perspective, and what is best for Front Row Motorsports, I don't think there really is a decision. If it helps Buescher qualify for The Chase, Cassill sits.