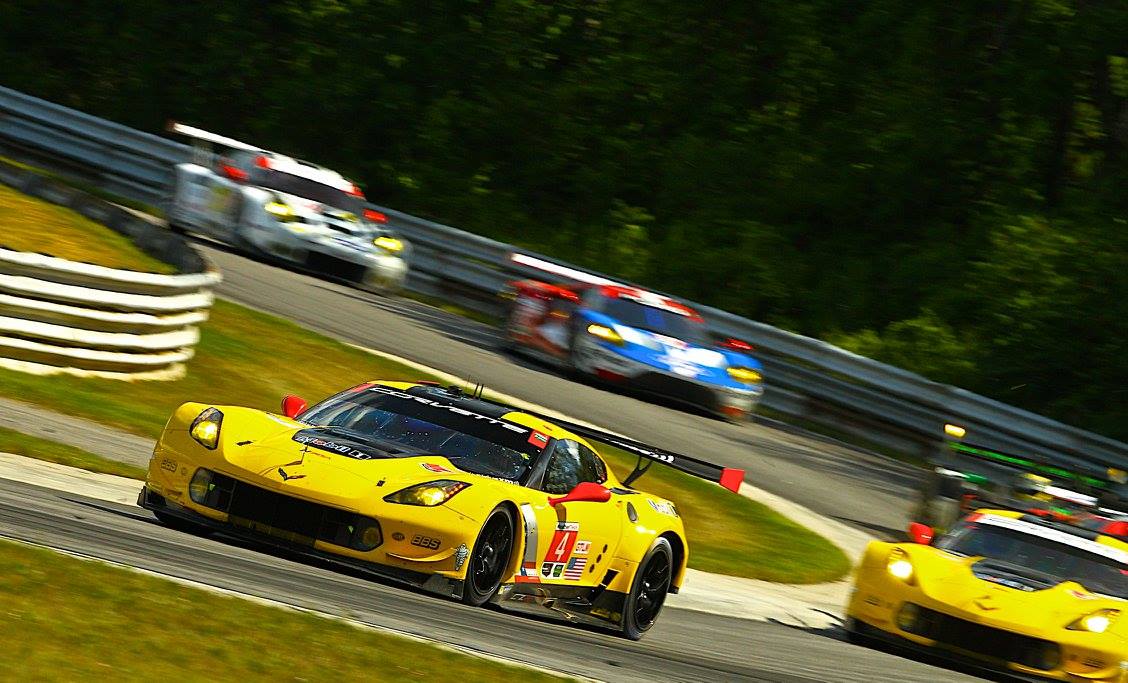 LAKEVILLE, Conn. – With 31 cars racing on the shortest track on the IMSA WeatherTech SportsCar Championship schedule – divided into three classes, all three lapping at different speeds – there was no question the two-hour, 40-minute Northeast Grand Prix at Lime Rock Park in Connecticut would be action-packed.

Though the IMSA Continental Tire SportsCar Challenge race earlier in the day managed to run for two and a half hours without a caution flag, the first yellow fell on the IMSA WeatherTech Northeast Grand Prix before the cars reached the first turn of the first lap. After that, the key word was survival. “Keep your nose clean and stay out of trouble," said Tommy Milner, co-driver with Oliver Gavin in the GT Le Mans No. 4 Chevrolet Corvette Racing C7.R.

And that’s what Milner and Gavin did, giving this Corvette team its 100th win since they broke through with that first victory Sept. 2, 2000, at Texas Motor Speedway.

Adding to the honor was the fact that the team car, the No. 3 driven by Antonio Garcia and Jan Magnussen, finished right behind the No. 4, just 0.975 seconds back. And that marked the 60th time the Corvette team has finished first and second.

Milner and Gavin won the 2016 season opener, the Rolex 24 At Daytona, then the second race, the Mobil 1 Twelve Hours of Sebring. After that, it was a long dry spell, and Milner said the goal of achieving 100 wins became a monkey on the team’s back. “And that monkey just got bigger and bigger. I’m really happy to get it off our backs."

It didn’t hurt that the No. 4 was the fastest GT Le Mans car on the track, with Gavin turning the quickest lap in the class of 51.341 seconds, set on lap 109 of the 169-lap event. Third behind the two Corvettes was Ryan Briscoe and his co-driver, Richard Westbrook, who qualified the No. 67 Ford GT on the pole. Counting the 24 Hours of Le Mans, it’s the first loss for the two-car Ford Chip Ganassi team since before May 1, at the Continental Tire Monterey Grand Prix at Mazda Raceway Laguna Seca.

The race included the GT Le Mans, GT Daytona and Prototype Challenge classes, with the Prototypes taking the weekend off. The overall winner was, as expected, a Prototype Challenge car, namely the No. 8 Starworks Motorsport Chevrolet-powered ORECA FLM09 driven with constant competence by Alex Popow and Renger van der Zande. The duo refused to be shaken by the traffic or the temperature – when the race started, it was 95 degrees and the track surface was 120 degrees, which is tough on tires.

Van der Zande closed out the race, stretching out his lead to almost 10 seconds in the closing stages over Tom Kimber-Smith, who co-drove the No. 52 PR1/Mathiasen entry with Robert Alon. With only a few laps to go, dense traffic slowed Van der Zande, and before he knew it, Kimber-Smith had cut that 10-second deficit to less than one second. Van der Zande crossed the finish line just 0.815 seconds ahead of Kimber-Smith.

Third was the No. 38 of Kyle Marcelli and James French, in the Performance Tech car. Marcelli was part of that dense traffic Van der Zande encountered at the end, because Marcelli didn’t want to go a lap down. Eventually Van der Zande passed him. “I don’t blame him," van der Zande said. “I would have done the same thing." He and Popow came to Lime Rock with the season points lead, and this victory just added to their total.

Though the racing got physical in every class, the GT Daytona cars will probably need the most body work before the next race. The Daytona-winning No. 44 Magnus Audi R8 LMS GT3 of Andy Lally and John Potter took the class victory, with Lally finishing 0.932 seconds ahead of the No. 6 Audi of Stevenson Motorsports, driven by Robin Liddell and Andrew Davis.

[adinserter name="GOOGLE AD"]Lally said the team had a strategy to take it easy during the first part of the race, and “run hard at the end." He took the lead with 21 minutes to go and never looked back. He wrecked the car badly at the last race, at Canadian Tire Motorsport Park, and the team spent “a lot of early mornings and late nights putting it back together better than it’s ever been," Lally said.

Third in GT Daytona was perhaps the biggest surprise – the No. 33 ViperExchange.com Dodge Viper GT3-R of owner Ben Keating and hired gun Jeroen Bleekemolen. During the recent “Balance of Performance" adjustments the sanctioning body IMSA has made to speed up some cars and slow down others, the lone Viper has been overlooked. Lately it has been the slowest car in the field, and today, the 13th slowest of the 14 cars in the class.

But through some bizarre pit strategy, Bleekemolen ended up out front with a half-hour to go. Heroic driving kept him there until near the end, when Lally and Liddell got by, but Bleekemolen held on for third, perhaps the most unexpected podium finish of the weekend.

Though there was plenty of contact, the scariest moment came with an hour and 12 minutes to go, when Earl Bamber, driver of the No. 912 Porsche North America 911 RSR, tried to pass Dirk Werner in the No. 25 BMW Team RLL M6 GTLM car in a corner. They made contact and went hard into the tire wall, with the BMW’s nose taking the worst hit. It was a relief when both drivers exited the cars under their own power.

An earlier incident involving a miscalculation by Misha Goikhberg in the No. 88 PC car literally ripped the door off the No. 63 Ferrari GTD car of class points leader Christina Nielsen, putting her and co-driver Alessandro Balzan multiple laps down, ending up 11th in their class. Nielsen is still the GTD points leader, though the margin has shrunk.