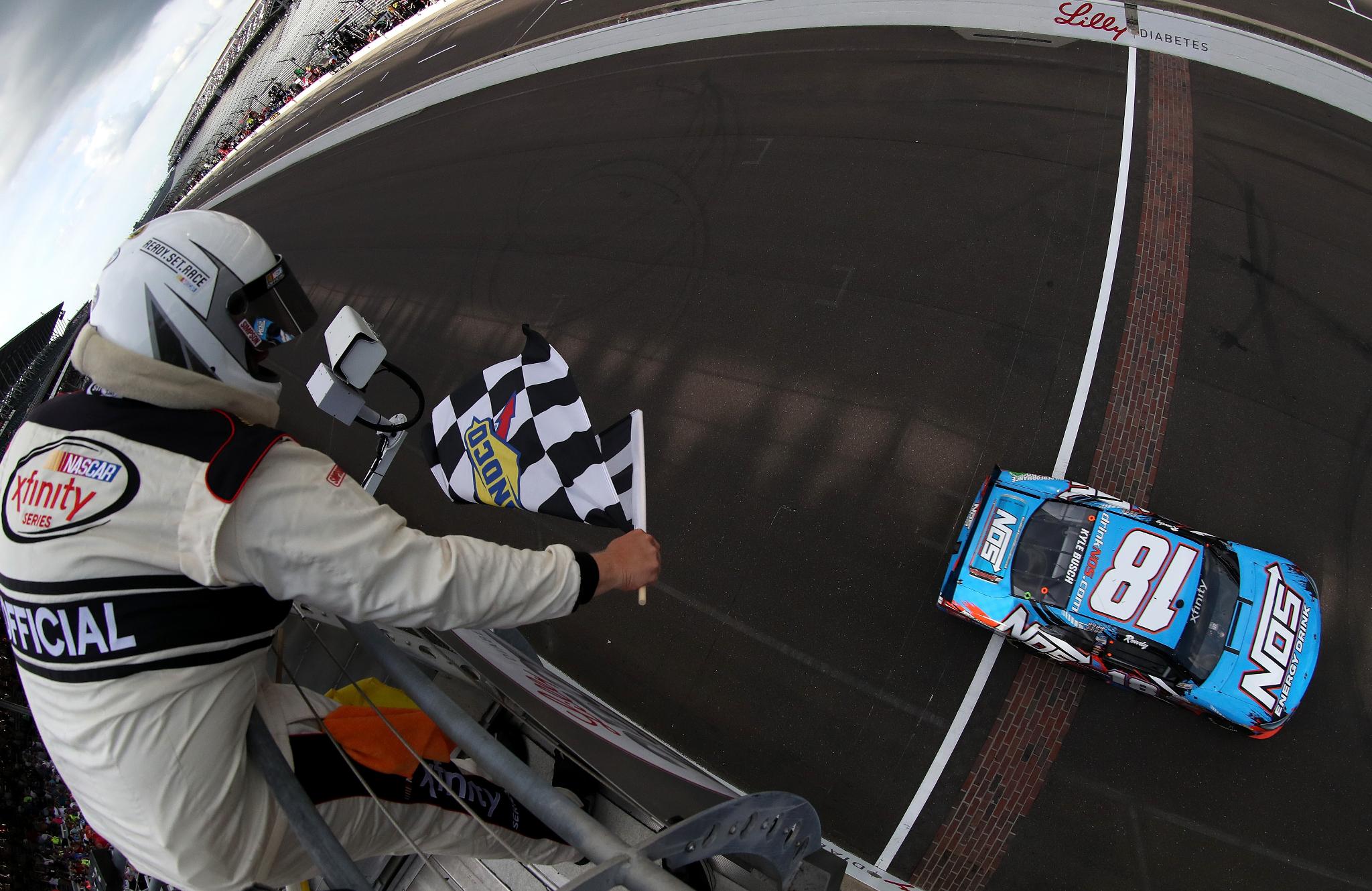 About the only thing Kyle Busch didn't win on Saturday was the one prize he wasn't eligible for.

But the driver of the No. 18 Joe Gibbs Racing Toyota won everything else, capping a phenomenal day at Indianapolis Motor Speedway with a victory in the Lilly Diabetes 250 NASCAR XFINITY Series race—and he did so with tires that were 23 laps older than those of his pursuers.

Busch led 62 of 63 laps but had to hold off Kevin Harvick on a two lap dash in overtime to win for the third time at the Brickyard, the seventh time in 11 starts this season and the 83rd time in his career, extending his series record.

The XFINITY race was actually the fourth competition Busch won on Saturday. First, he won the top starting spot for the Lilly Diabetes 250, the 54th pole of his career. Next, he won the pole position for Sunday's Crown Royal 400 (3 p.m. ET on NBCSN), one of the marquee NASCAR Sprint Cup Series events of the season.

After that Busch led all 20 laps and took the checkered flag in the first heat race under the XFINITY Series' final Dash 4 Cash event of the season.

Busch didn't win the $100,000 Dash 4 Cash bonus, a prize available only to series regulars. That check went to Justin Allgaier, who rolled home in fifth place, the highest finisher among the four drivers who earned eligibility in the heat races.

Busch, however, has one more mountain to climb. On Sunday, he'll attempt to complete his second straight weekend sweep at the vaunted Brickyard.

Busch held off Harvick, third-place finisher Paul Menard and fourth-place Kyle Larson even though Busch had stayed out on old rubber while those behind him pitted for new tires under the first caution on Lap 50.

"The new tires for those guys were good for them but not so good for us," Busch said. "I just dug in deep and gave it everything I had. I knew I had to get really good restarts. On the second-to-last one (on Lap 54), I got a really good one, and then the last one (on lap 62 in overtime), it was OK.

[adinserter name="GOOGLE AD"] "I got an OK one, and I saw Harvick pull out… but he never got alongside of me. I never felt him close enough that he was going to pull alongside. … It's a pretty awesome feeling to be able to go back to Victory Lane here this year. We're sitting on the pole tomorrow, and hopefully we can have another sweep here."

Busch had a lead of more than eight seconds on Lap 48 of a scheduled 60 when JGR teammate Erik Jones, the wire-to-wire winner of the second heat race, blew a right rear tire entering Turn 1 and spun, causing the afternoon's first caution.

While Busch and series leader Daniel Suarez stayed out on old tires, the remaining eight lead-lap cars came to pit road. Busch survived the restart on lap 54, but a lap later, ay Black Jr. and Harrison Rhodes wrecked off Turn 2 to bring put the second yellow and force the overtime.

On the Lap 62 restart, Harvick pushed Larson, then ducked to the inside but was reluctant to take a bad angle into the first corner. As Harvick and Larson battled briefly for second, Busch pulled away and ultimately crossed the finish line .411 seconds ahead of Harvick's No. 88 JR Motorsports Chevrolet.

"I really thought I could beat him down the backstretch if I got off of (Turn) 2 well and could clear the 42 (Larson)," Harvick said. "I got to the inside and kind of hit the chip and decided to hold the line up a little bit and try to get a run, and the 42 got stuck on the outside and that ruined my plan.

"But our goal was to overachieve today, and we did that and capitalized on some situations and had a couple of good restarts and wound up second. All in all, it wasn't a bad day."

Just nowhere near as good as the one Busch had.