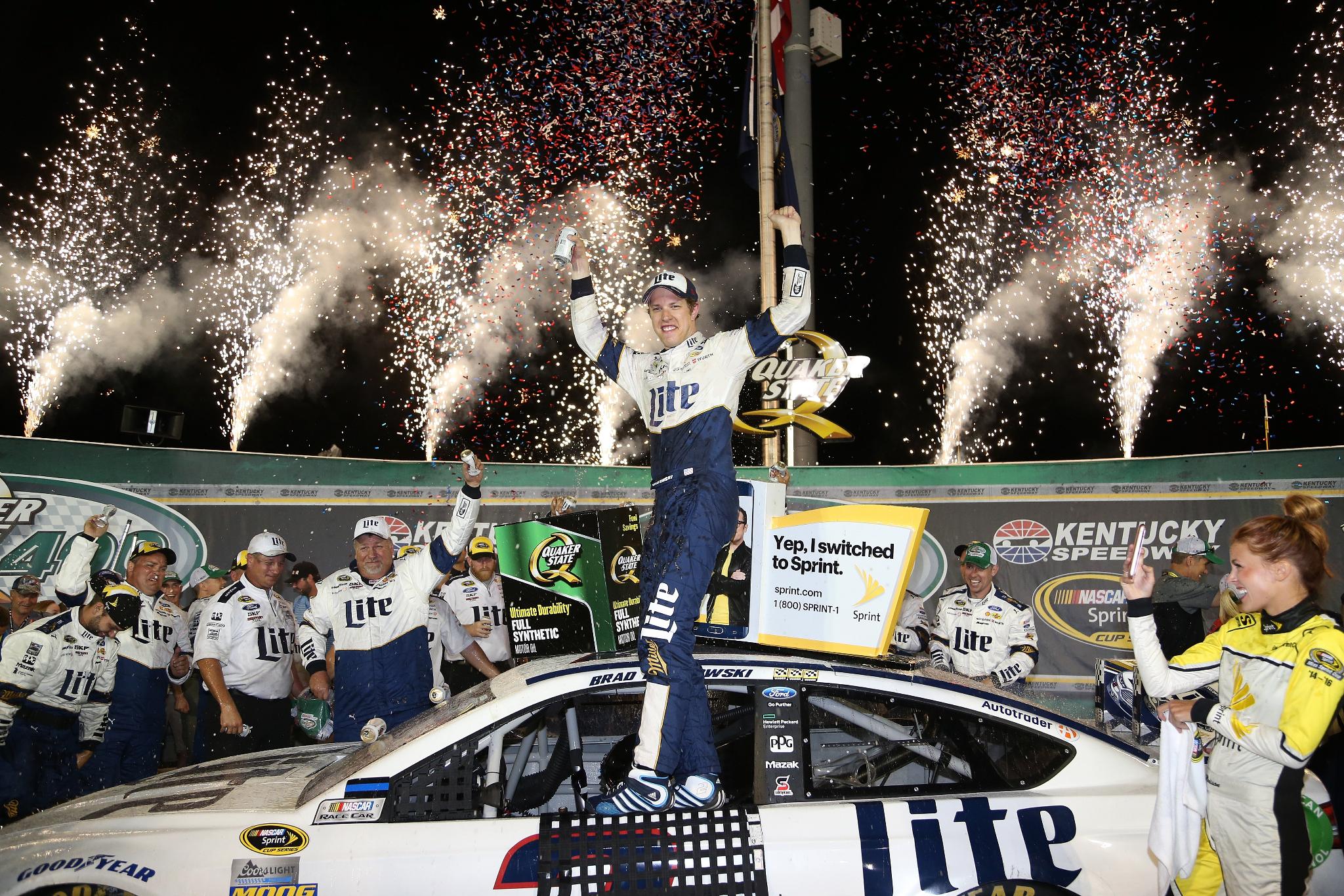 Saving just enough fuel to get to the finish line, Keselowski eked out a heart-thumping victory over Carl Edwards to win his second consecutive NASCAR Sprint Cup Series race and his third at Kentucky Speedway.

But this was not the same bumpy, abrasive Kentucky Speedway where Keselowski went to Victory Lane in 2012 and 2014. This was a repaved, reconfigured 1.5-mile intermediate track fraught with treachery, especially when combined with the lower-downforce aerodynamic package in use for the race.

Keselowski got to the finish line .175 seconds ahead of Edwards, who made up a deficit of more than six seconds in the final 10 laps but couldn't quite get to Keselowski's rear bumper on the final lap.

When Keselowski took the checkered flag, his fuel cell was dry. The driver of the No. 2 Team Penske Ford didn't have enough gas to do a celebratory burnout, and he needed a push from a safety truck to get to Victory Lane.

Keselowski took the lead from Kevin Harvick after a restart on lap 200 and held it the rest of the way, except for Lap 261, when Matt Kenseth took the top spot and immediately came to pit road for fuel.

By then, the die was cast for Keselowski, who was committed to finishing the race without another fuel stop.

"We knew the fuel mileage," said Keselowski, who won for the fourth time this year, the 21st time in his career, and became the first driver to officially clinch a spot in the Chase for the NASCAR Sprint Cup. "We went out and we set a really fast pace there on that restart and were just using fuel, and then it became obvious that you were going to have to save fuel at the end, but I already used so much.

"It's a testament to our guys to have the fuel mileage that we did to be able to get back what I burnt early in the run and get the Miller Lite Ford in Victory Lane. Usually these repaves are kind of my Achilles heel, but to get a win here at Kentucky… I know it's been a good track for us in the past, but this isn't the same Kentucky, I can tell you that.

"These cars were tough to drive today, but a good tough. This was a hard-fought battle, and I'm really proud of everybody on the 2 crew to get win number four and take that first place."

When Keselowski slowed through Turn 4 on the next-to-last lap, Edwards thought he had the race won, but in retrospect, Edwards believed he had been beaten by a cunning opponent.

"Yeah, I thought he was out of fuel coming off of (Turn) 4, but he actually did it very well," said Keselowski, who indicated on his radio with more than a lap left that he was out of fuel. "If he didn't beat me, I'd be more impressed…

"I guess I'm impressed that he did beat me, but I don't want to be. He waited. He basically shut the car off and went right off of 4 and matched it perfectly to where I couldn't get by him down the front straightaway, and then he ran like heck through 1 and 2, and then I thought maybe he'll run out down the back straight. Man, I dove it down in there trying to catch him into 3, and I couldn't even get to him."

Keselowski, however, said he thought he was out of gas when his car sputtered off Turn 4.

"I didn't think I was going to win the race," Keselowski said.

Harvick and Martin Truex Jr. dominated the first two-thirds of the event, leading 128 and 46 laps, respectively.

Truex had taken the lead off pit road on Lap 196, but NASCAR sent him to the rear of the field for passing Harvick, then the race leader, on the entry to pit road. For the last 68 laps, Truex drove like a madman, advancing from 23rd to as high as third before pitting for fuel and finishing 10th.

"It wasn't my night on that deal," Truex said. "It's frustrating, we had the car to beat. We came out with the lead and they took it away from us. It's just the way it goes, I guess."

[adinserter name="GOOGLE AD"] Particularly perilous throughout the race were the flatter of the two corners —Turns 3 and 4 — with the entry to Turn 3 especially daunting. Ten laps into the race, Ricky Stenhouse Jr. pancaked the right side of his No. 17 Ford against the outside wall of the Turn 3 torture chamber.

Nor were champions and frontrunners exempt from calamity. On Lap 32, Jimmie Johnson spun through Turn 4 and crumpled the left rear quarter of his No. 48 Chevrolet. On Lap 53, Joey slammed the Turn 3 wall after scraping it 10 laps earlier.

On Lap 88, Ryan Blaney spun from the middle of a three-wide dilemma in Turn 3 and took the No. 24 Chevrolet of fellow Sunoco Rookie of the Year competitor Chase Elliott with him. On Lap 93, the cars of Brian Scott, Chris Buescher and AJ Allmendinger were mangled in an eight-car pileup.

Lap 194 produced the 11th caution of the race, tying the record set last year, but from a restart on Lap 200 through the finish on Lap 267, the race ran green, and Keselowski was able to squeeze 68 laps out of his fuel cell.

"We were totally out at the start/finish line," said Paul Wolfe, Keselowski's crew chief. "So it couldn't have timed out any better."