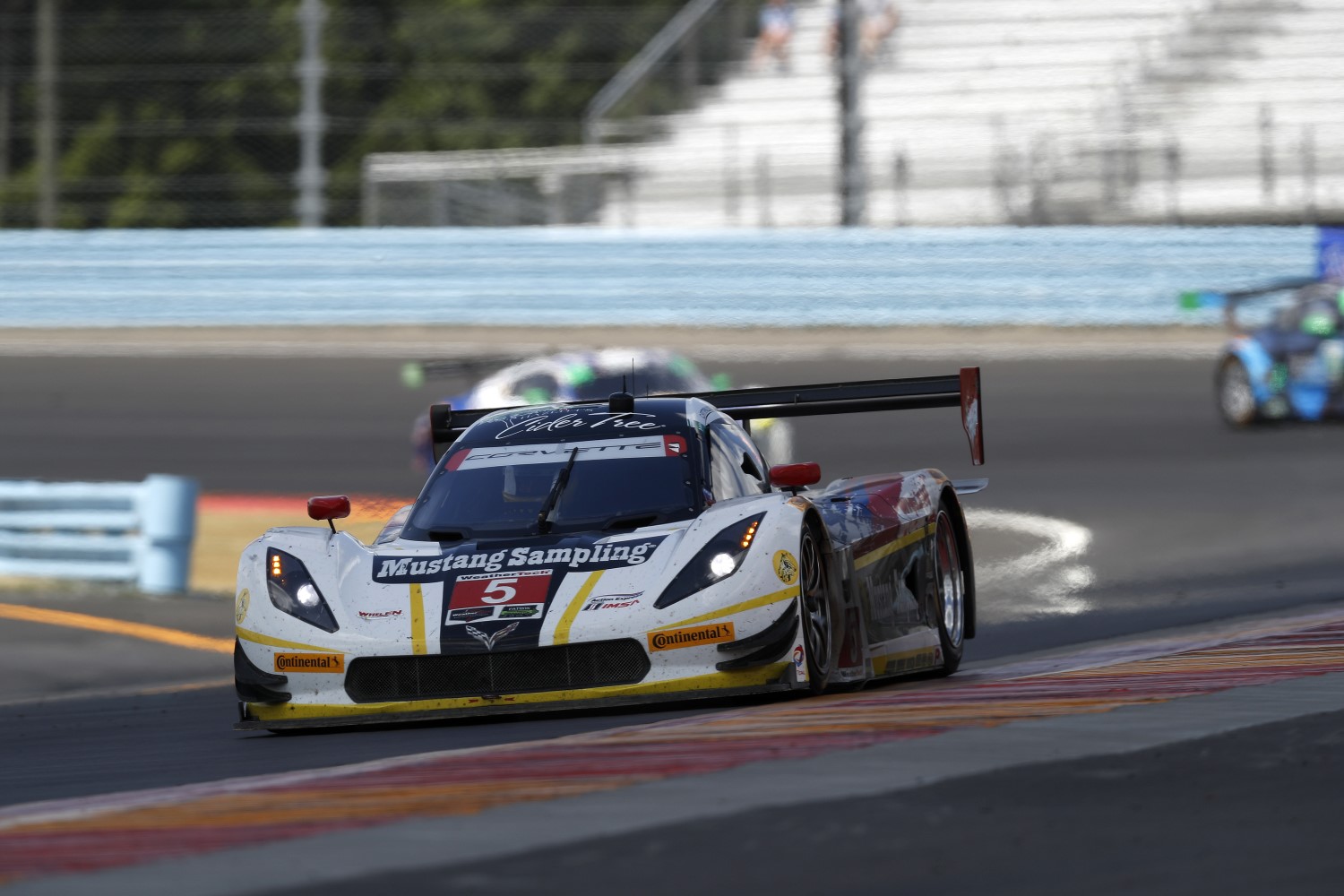 Action Express Racing Corvette Daytona Prototype drivers Christian Fittipaldi and Joao Barbosa made a strong statement in their bid for a third consecutive IMSA WeatherTech SportsCar Championship title, winning the Sahlen’s Six Hours of The Glen to take their first victory of the season.

The drivers of the No. 5 Mustang Sampling/Cider Tree Corvette DP took over the lead in both the WeatherTech Championship and Tequila Patron North American Endurance Cup standings in the process. Barbosa beat Action Express Racing teammate Dane Cameron to the checkered flag by 0.709 seconds, joining Fittipaldi in scoring a sixth career WeatherTech Championship victory.

“It was probably one of the fastest-paced races that I’ve done in a while," Barbosa said. “They did an amazing job with the repaved surface. We were able to keep up the pace for a long time. We did a few changes after qualifying and we really hit it. The team has been working really hard to get a win for the No. 5 car, and we did it in great style. It was a great race, very hard."

Cameron co-drove with Eric Curran in the No. 31 Whelen Engineering/Team Fox Corvette DP, recording their fourth podium finish of the season.

“It was certainly a great day for Action Express, since it’s our goal to be 1-2 every single weekend," Cameron said. “It’s a little disappointing to be on the back end of that, because they were able to jump us in the pits and we had our hands full with the No. 60 car."

The winners led six times for 107 of the 197 laps on the 3.4-mile circuit. Entering the race tied for the lead in the Prototype standings with Ricky and Jordan Taylor – who finished fourth in the No. 10 Konica Minolta Corvette DP with Max Angelelli – Fittipaldi and Barbosa now unofficially lead Curran, Cameron and the Taylor brothers by seven points, 187-180.

Tequila Patron ESM’s hopes for a third consecutive Tequila Patron Endurance Cup victory ended when Pipo Derani retired the No. 2 Honda Ligier JS P2 co-driven by Scott Sharp and TOTAL Pole Award winner Johannes van Overbeek with one hour, 11 minutes remaining due to a mechanical failure. The team opened the year with victories at Daytona and Sebring, and managed to stay in contention by changing a power steering part under caution before the late issue.

Derani passed Barbosa one minute before the three-hour mark to earn the maximum five-point bonus for leading the halfway segment in the Patron Endurance Cup. Tied with Action Express entering the event, unofficially Tequila Patron ESM is now second in the Patron Endurance Cup entering the season-ending Petit Le Mans at Road Atlanta on Oct. 1, 35-33.

“It’s a shame, because the car was good and we had a shot at victory," Derani said. “It felt good to be able to take the lead at the midway point. They told me to push to try to overtake him, so I pushed and it was very satisfying to take the point. Now we’ll try to bounce back at Petit Le Mans."

The Ford Chip Ganassi Racing GT Le Mans (GTLM) program is quickly running out of ‘firsts’ but it accomplished another one in Sunday’s IMSA WeatherTech SportsCar Championship Sahlen’s Six Hours of The Glen at the 3.4-mile Watkins Glen International circuit.

It was the first 1-2 finish for the team’s new-for-2016 GTLM program, as Richard Westbrook and Ryan Briscoe co-drove their No. 67 Ford GT to victory ahead of teammates Joey Hand and Dirk Mueller in the 24 Hours of Le Mans-winning No. 66 entry.

Westbrook qualified on the class pole position Saturday while co-driver Briscoe was making his way back to Watkins Glen from Connecticut, where his wife, Nicole, gave birth to their second child, a daughter, on Friday. By the end of the first lap Sunday morning, however, it was John Edwards in the No. 100 IHG Rewards Club BMW M6 GTLM that held the lead with Westbrook running in second.

The Ford/BMW battle lasted throughout the six hours, while the No. 68 Scuderia Corsa Ferrari 488 GTE also took a turn at the head of the field. In the end, Westbrook and Briscoe combined to lead five different times. Briscoe put the No. 67 into the lead for what turned out to be the final time with an hour and 40 minutes remaining, 10 minutes before pitting to turn the car over to Westbrook, who rejoined the race without losing the lead.

Westbrook then held off a hard-charging pack for the remainder of the race, beating Hand by 3.222 seconds to earn the second consecutive WeatherTech Championship victory for himself and Briscoe, who previously won the Continental Tire Monterey Grand Prix powered by Mazda at Mazda Raceway Laguna Seca in May. The win moved the No. 67 teammates to within eight points, 159-151, of GTLM championship co-leaders Tommy Milner and Oliver Gavin, who co-drove the No. 4 Corvette Racing Chevrolet Corvette C7.R.

“It’s just a good pairing for us at the moment," said Westbrook, who earned his third consecutive victory at Watkins Glen International after winning the Prototype class the last two years. “Confidence is so high, so it’s nice to go to work at the Ford camp. It’s been a great 30 days, hasn’t it?

“We had a tough fight with the BMW for most of the race, but right at the end we had just that little bit to be stronger. I’m happy for my mate and happy that he made it. And I’m happy he has a trophy to take back to his girls."

To do it, the No. 63 Scuderia Corsa Ferrari 488 GT3 co-drivers first had to overcome a one-lap deficit that resulted from an extended pit road stay in the first half of the race to replace an engine sensor. Balzan took the lead from Lawson Aschenbach in the No. 9 Stevenson Automotive Group Audi R8 LMS GT3 with 53 minutes remaining and then held off a charging Andy Lally in the No. 44 Magnus Racing Audi by to score the victory by 1.837 second. Lally took second with co-drivers John Potter and Dion von Moltke.

“It was not an easy job to do qualifying for three hours," Balzan said. “We were really pushing hard out there. I didn’t expect to be that competitive, Christina found a problem in the car. We had about two hours when I didn’t think we would even finish the race, but then the team and the support from Ferrari managed to fix that problem. I was really pushing 100 percent, and as the car was burning fuel, the car was getting better and better. The secret of our three is that we are having a lot of fun."

Balzan, Nielsen and Segal also combined to win the Mobil 1 Twelve Hours of Sebring Fueled by Fresh From Florida in March. Two weeks ago, Segal also won the GTE Am class in the 24 Hours of Le Mans driving a Scuderia Corsa Ferrari alongside 2015 WeatherTech Championship GTD co-champions Bill Sweedler and Townsend Bell.

Full-time drivers Balzan and Nielsen now lead the GTD standings by 13 points, 162-149, over Mario Farnbacher and Alex Riberas, who finished third in the No. 23 Heart of Racing Porsche 911 GT3 R along with endurance co-driver Ian James for Team Seattle / Heart of Racing.