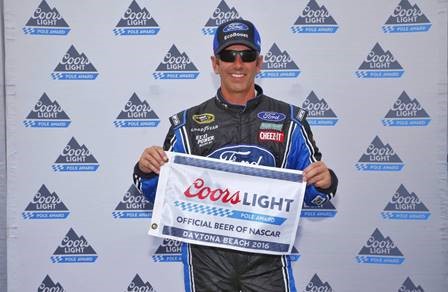 The pole was Biffle’s second at a plate track, the first coming when he led the field to green in the 2004 Daytona 500, not quite eight months after Biffle won the only plate race of his career — the 2003 Coke Zero 400. Both were career-firsts for the Biff.

All told, Biffle has won 13 poles in the NASCAR Sprint Cup Series, but Friday’s was particularly significant because of the boost it give his organization, which has been struggling for the past few years to find speed in the wake of the departure of veterans Matt Kenseth and Edwards to Joe Gibbs Racing.

"It is a huge confidence-builder, and coming out of here with a good finish, that’s a lot of momentum for the team," Biffle said. "Qualifying on the pole, getting a good run and moving on to the next race — we need that.

"We need those good finishes and momentum and encouragement. Winning the pole is all smiles on those guys pushing the car up there and getting the pictures. They’re pumped right now. We’ll be ready to go tomorrow night."

In a backup car with no practice laps because of a wreck in Saturday morning’s practice, Kyle Busch (192.336 mph) qualified third. Biffle’s teammate, Ricky Stenhouse Jr. (192.320 mph), earned the fourth starting spot, followed by Brad Keselowski (192.254 mph) and Austin Dillon (192.254 mph), who lost the fifth spot to Keselowski on an owner points tiebreaker.

[adinserter name="GOOGLE AD"]Defending race winner Dale Earnhardt Jr. failed to make the top 12 and will start 16th. Jimmie Johnson (eighth) was the only Hendrick Motorsports driver to advance to the second round, just as Kurt Busch (10th) was the only Stewart-Haas Racing entry to do so.

Earnhardt, however, wasn’t particularly concerned about his starting position.

"I think we’ll be good," he said. "We worked on our car to try and help it drive better. That might take some straight-line speed out of it, but it’s going to hopefully help us be able to make moves we need to make in the race.

"It's going to be slick in the race, and handling is going to be real important. I'm more concerned really with the car driving good. Might not be the fastest car out there, (but) that's not the car that is going to win the race. I think (that’s going to be) the guy that's got the best handling package. This place is going to be pretty slick."

Biffle was fastest in both rounds of qualifying, pacing the first session at 192.629 mph.

"After that first session, I knew we had to be worried about (Greg)," Edwards said. "We ran a really good lap in the second session, but those guys were fast. They put the hard work in, they deserve it and I know how hard those guys work over there.