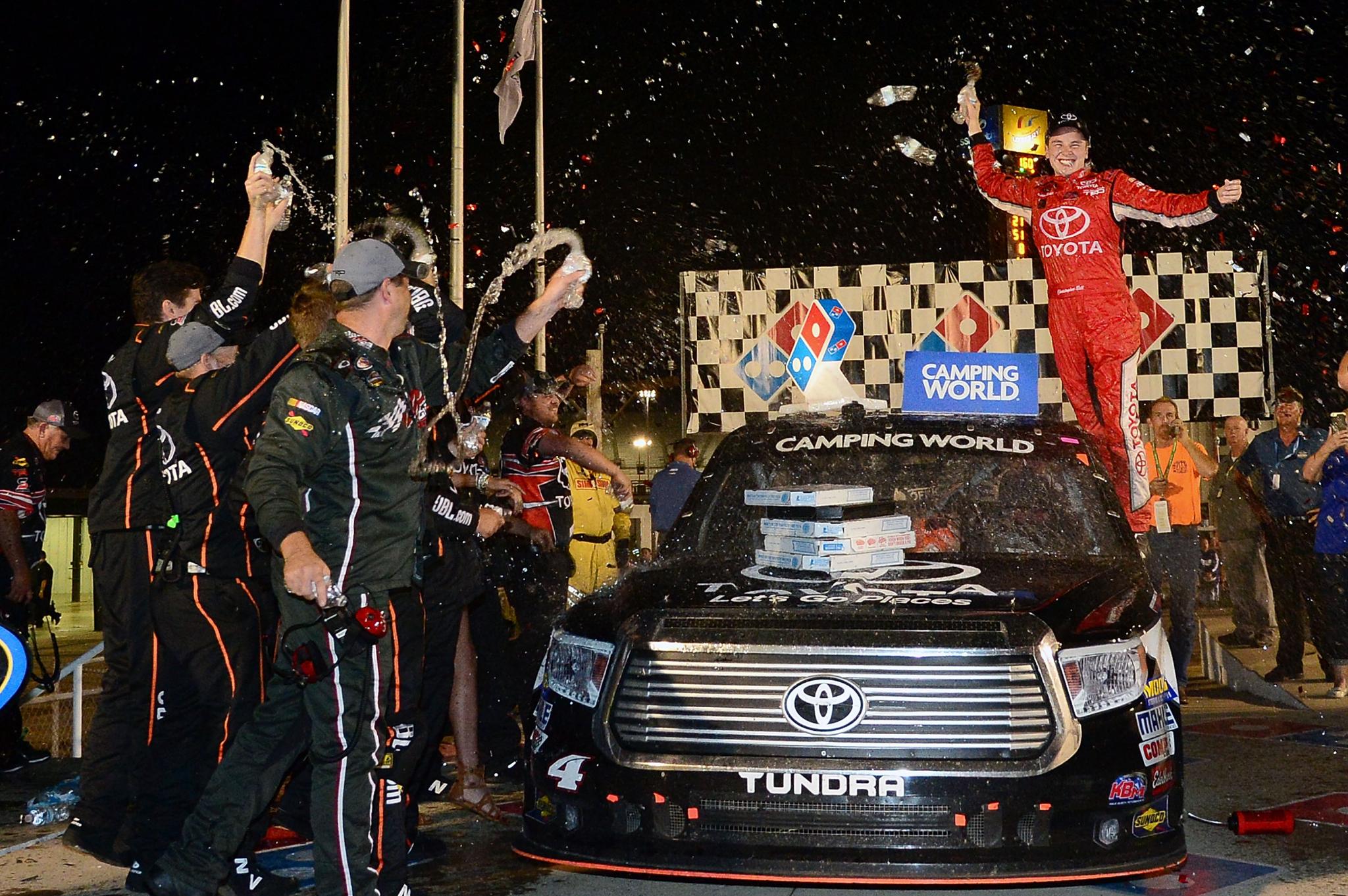 A gutsy decision to use the bottom lane for a restart with two laps to go paid off for Christopher Bell, who earned his second career NASCAR Camping World Truck Series victory in Saturday night's third annual Drivin' for Linemen 200 at Gateway Motorsports Park.

Bell, driver of the No. 4 Kyle Busch Motorsports Toyota Tundra, survived a chaotic and intense second half to edge Ben Rhodes to the checkered flag, giving KBM its 50th victory in the series, tying Roush Fenway Racing for the all-time series wins lead.

"This one's for my guys," said Bell in Victory Lane. "My guys, they deserve this one. We've been so fast all year long and I just kept making a lot of mistakes. I just can't say thank you enough to all the guys at Toyota, TRD, JBL, everyone at KBM, all my pit crew guys they did an awesome job. Track position was everything. We got awesome motors underneath the hood of these things and all the guys at JGR, they never give up and keep digging."

Rhodes, who contended for his first career win, had to settle for a career-best second.

"He (Bell) had a really loose truck and that's what you needed at the end of the race," Rhodes said. "It just got tighter and tighter as the runs went on. I was way too tight but I was making some good ground on the outside and he came up on us a little bit, which is fine. It's racing for the win at the end. He did an awesome job all night. He raced everybody clean and with respect. I think we could use a little more of that in our series after this crazy Drivin' For Linemen 200."

For the second consecutive year, Mother Nature soaked the 1.25-mile track shortly before qualifying was to begin, forcing the field to be set by combined practice speeds, handing the top starting position to Sunoco Rookie of the Year candidate Rhodes.

Despite an hour and fifteen-minute delay for inclement weather, Rhodes would lose the lead on the start from veteran Johnny Sauter who held command until Tyler Reddick elected to stay out on a Lap 26 caution for an incident in Turn 3.

The bold strategy for Reddick paid off with the race lead until the event's third caution on Lap 65 for the expiration of the caution clock. During routine pit stops, a quick stop from William Byron's crew handed him the lead.

The NASCAR Next alumnus led for a whopping 48 laps, until outside pole sitter Sauter squeezed ahead on pit road following a Lap 113 caution for the second expiration of the caution clock.

The two would be under attack on the restart from Christopher Bell who surged into the lead on Lap on Lap 119 and despite losing the lead to Rhodes on Lap 149, the Toyota Racing development driver reclaimed the lead on Lap 153 and held on for his first NCWTS win on pavement.

The event was red-flagged three times for incidents. The first for a three-truck incident in Turn 3 on Lap 120 lasted six minutes, 38 seconds. The second came 11 laps from the finish for a seven-truck accident in Turn 4 for a total of 10 minutes, 50 seconds. The final red flag broke out behind the leaders for an incident between Spencer Gallagher and John Wes Townley that lasted 12 minutes, 49 seconds. The two drivers wrestled after climbing from their trucks and were summoned to the Truck Series hauler post-race.

The NASCAR Camping World Truck Series will take a one-week breather before returning to competition at Kentucky Speedway on Thurs., July 7 for the Buckle Up Your Truck 225.

What does it mean to get your first win on pavement?

“This one is for my guys here. My guys – they deserve this one. We’ve been so fast all year long and I just kept making a lot of mistakes, but I just can’t say thank you enough to all the guys at Toyota, TRD (Toyota Racing Development), JBL, everyone at KBM (Kyle Busch Motorsports), all my pit crew guys – they did an awesome job tonight and track position was everything. We got awesome motors underneath the hood of these things. All the guys at JGR (Joe Gibbs Racing) – they never give up and keep digging."

How important was the final restart?

“I had one restart there as the leader late in the race, but a couple of them back picked the top and got used up a lot bit, so I figured the safest thing was going to be to run the bottom because I knew my truck was turning pretty good. This guy (Jerry Baxter, crew chief) right here, he’s the man, let me tell you. Thank you, Jerry."

How meaningful is this win?

“This is just a dream come true. Eldora came fairly quick in my NASCAR deal, but the next one didn’t come so quick, but this one – it was a long time coming. Man, these guys work so hard week in and week out and they give me awesome race trucks and it’s just nice to be able to give these guys what they deserve. I mean, I just can’t thank everyone enough over there on this No. 4 team. It’s a dream to be here and just really thankful that – I wouldn’t be here without Toyota, JBL, KBM (Kyle Busch Motorsports), Kyle (Busch, team owner), Samantha (Busch), everyone, my crew chief Jerry (Baxter), everyone who believes in me. I’ve made a lot of mistakes and I’ve used up my fair share of mulligans, so I’m glad to be here."

How critical was Jerry Baxter’s call for four tires?

“Track position was everything and at the beginning of the race, I was mired back in seventh, eighth and couldn’t do anything, you know? And Jerry (Baxter, crew chief) kept asking me, ‘How’s the truck? How can I help you?’ And I’m like, ‘Dude, I’m a little bit tight here, a little loose here, but overall I’m not bad, you know? I just think if we were out in front of those guys, we’d be able to stay there,’ because everyone was the same speed. There’s a group of us that were really good and I knew whoever was out front was – had a pretty good shot at it."

How does it feel to have a win for the Chase?

“It’s a dream come true, man. Going from Atlanta where we almost had it and I made a mistake there and got a tire rub and cut a tire, but long time coming and let me tell you this will make our year a whole lot less stressful."