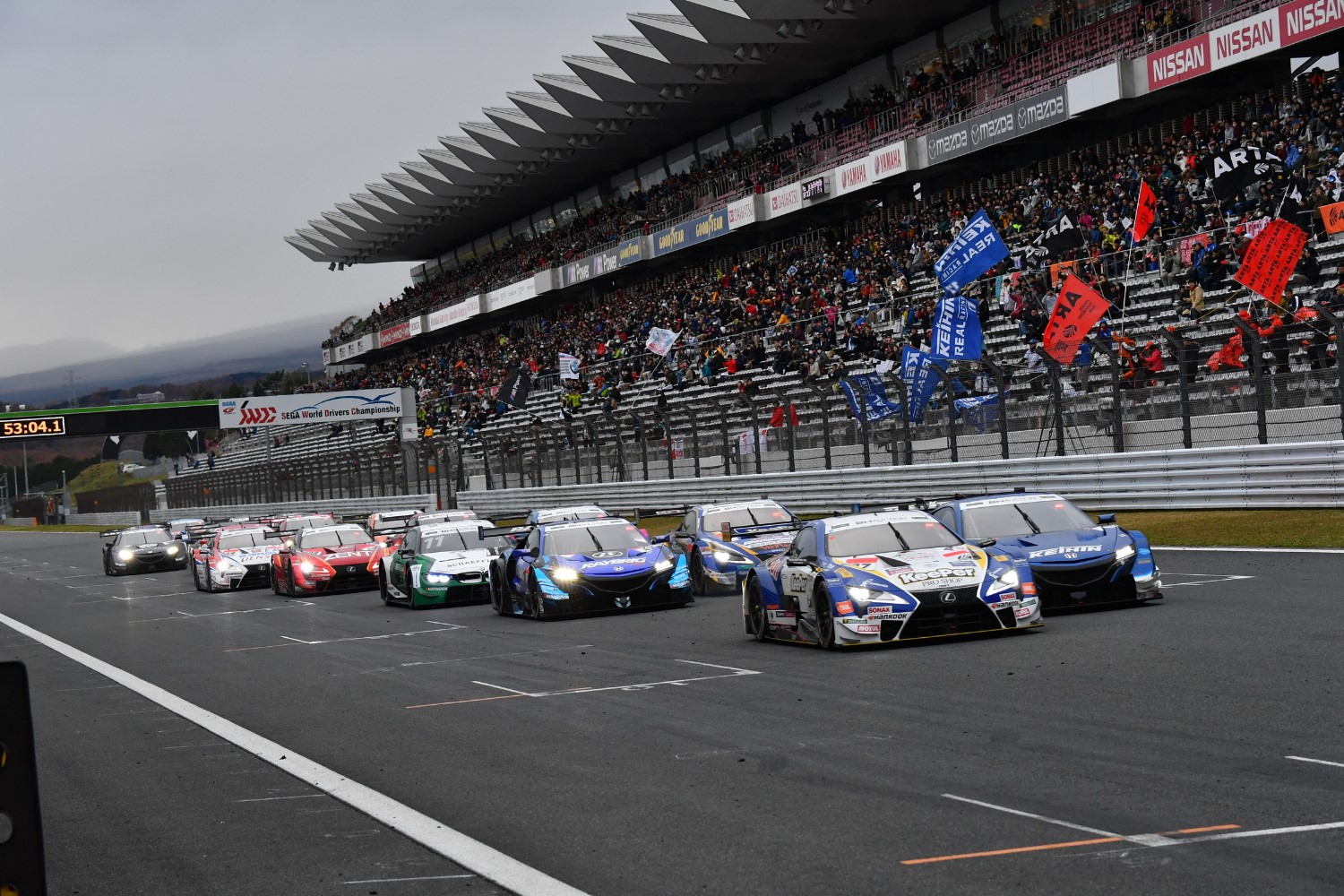 As Cassidy’s lead grew, he was able to recover from a slightly shaky pit-stop where his crew struggled to quickly switch both front wheels. Not even a late-race Safety Car period could halt his progress: despite the novelty of the new-to-SUPER GT Indy Car-style restart, Cassidy held off a late charge from Koudai Tsukakoshi, who finished second in his Keihin Honda NSX-GT, ahead of Yamamoto.

Frenchman Benoit Treluyer (Audi Sport Japan RS 5 DTM) emerged a slightly surprising victor of the seven-car DTM challenge, finishing sixth after steadily improving across the whole weekend. Behind him, 2019 champion Rene Rast (Audi Sport RS 5 DTM) finished eighth after spending most of his race embroiled in spirited scraps with a number of drivers, most notably Quintarelli, with whom he enjoyed a ding-dong battle, exchanging position as they fought into the Turn One hairpin.

Mike Rockenfeller (Audi Sport RS 5 DTM) started well from fourth place, but faded during the race, eventually getting pitched into a spin by Treluyer as the field scrabbled through the tight Dunlop Corner after the restart. The German came home 13th.

BMW’s Kamui Kobayashi was another stand-out performer, enjoying a late-race scrap with Rockenfeller to finish 14th.

Fellow BMW drivers Marco Wittmann and Alex Zanardi both struggled: the German gambled on a first-lap pit-stop, but was later forced to make a second stop, eventually finishing 18th, a lap adrift. Zanardi only narrowly made the race after his crew discovered a technical issue on the installation lap. He was forced into the pits for a lengthy stop during the race, too, eventually rejoining for the closing laps, and finishing eight laps down.

The drama begun before the race had even started for front-row starter Duval. The Frenchman locked up and slid into the barriers on the pre-race installation lap. The impact broke his left-front suspension and bodywork, leaving the car too extensively damaged to take part. His Audi RS 5 DTM will be repaired in time for Sunday’s race.

In the morning’s qualifying period, Cassidy underlined his form, banging in a 1m41.827s quick-lap midway through the session. Despite a flurry of late-stops for fresh rubber to capitalize on a mildly drying track, nobody ultimately got close to the New Zealander’s time.

“We’d been quite strong all week, so I felt confident," he said afterwards. “After my race in Hockenheim, I wanted to show we had good performance," he added, referring to his brief guest outing in Germany, where he was punted out on the first lap.

“It’s been the perfect day: pole and victory are fantastic achievements, and I’m really pleased we could show our strengths. But the biggest thing is that we got to have this race today – and I hope we can race again in the future. I grew up racing in Europe, and always looked up to the manufacturers and drivers competing in DTM. I really loved the style of this weekend – qualifying and racing on the same day is a lot of fun, and it’s not often we get to race on our own. I really enjoyed that, too. With more experience, the two championships can get closer – I really hope we get to do this again after this weekend."
Nick Cassidy, winner

“Before the race, we weren’t sure if it would stay wet or dry out, so we compromised on our set-up to cover both options. It’s always difficult to attack in the wet; I started sixth and wanted to do as much as I could – I got up to second, and tried to attack Nick, but it was impossible. Although we practiced the Indy Car restart behind the Safety Car during practice, I still felt worried about it, and was determined not to make a mistake at the first corner. It was a really good race, I really enjoyed it – it would be great if the SUPER GT field could go overseas next time for us to race against DTM again."
Koudai Tsukakoshi, 2nd place

“First of all, I would like to thank SUPER GT, GTA and the DTM for this opportunity, which has been really fantastic. It was great to battle with the DTM. Unfortunately, Loic crashed before the start, so we weren’t able to race with him, which was disappointing as I was looking forward to that battle. I really enjoyed this race – but, of course, we can and will use everything we learned today, including the set-up, to prepare for tomorrow."
Naoki Yamamoto, 3rd place

“I had a lot of fun; I really enjoyed it in the car! I made some mistakes – at the start, I got pushed by Tachikawa, but I was touching him a little bit as well, that’s racing. Anyway, after that, I caught up, then we lost a lot of time during the pit-stop – I guess that was because we didn’t practice during the week. I wasn’t ready and most of it was my fault. Then after the stop, I was able to catch up and could manage the second set of tires a little bit better. I also had a good restart. Then there was the situation with Rocky: I couldn’t move, couldn’t escape the guys who were inside. They didn’t see me. It’s a shame that he spun because of me, I was really sorry for that, but it was part of the race. It was good to have solid pace during the race – to come back after three years was really cool!"
Benoit Treluyer, 6th place