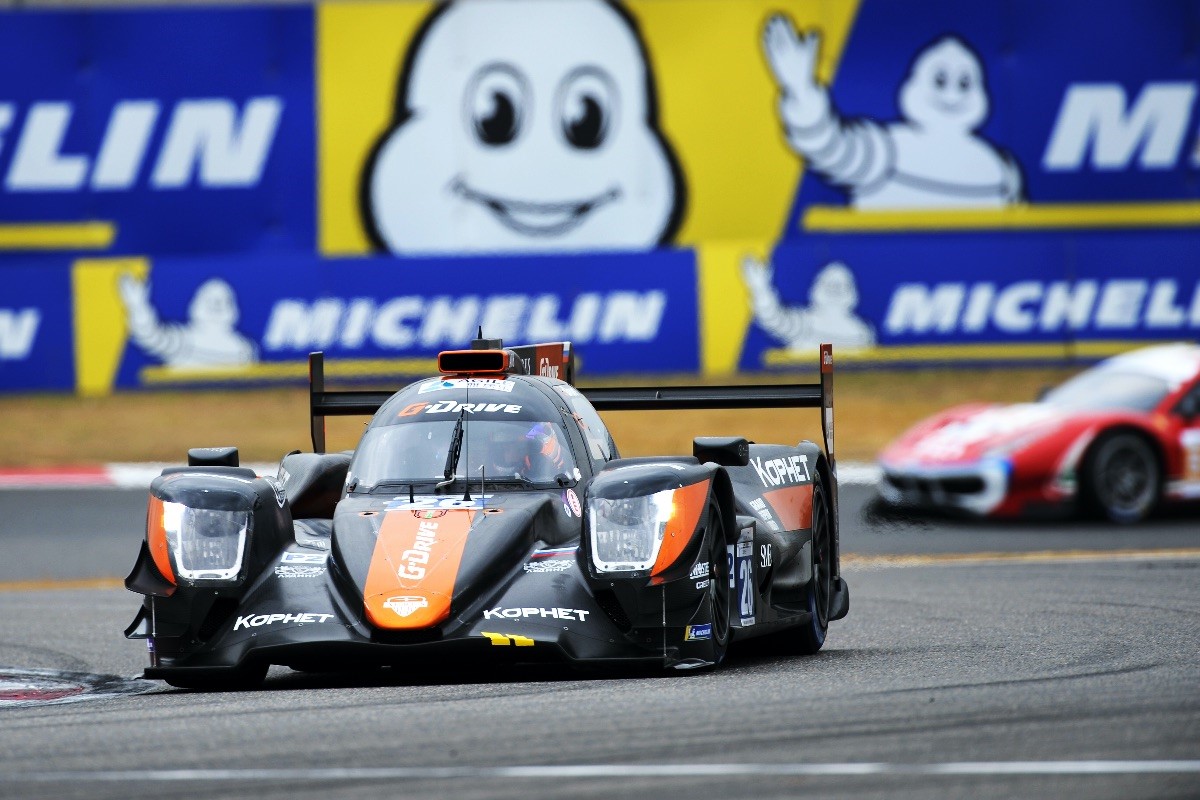 G-Drive Racing by Algarve has won the Agile Lohas World 4 Hours of Shanghai after the Carlin entry were given post-race penalty.

The battle for LMP2 honors was intense throughout the race. From the moment the lights went green until they crossed the finish line the #36 Eurasia Motorsport Ligier JS P217, the #45 Thunderhead Carlin Racing Dallara P217 and the #26 G-Drive Racing by Algarve Aurus 01 were fighting for the win.

In a thrilling final lap Harry Tincknell in the #45 snatched what seemed to be victory from Roman Rusinov in the #26, however post-race penalty was applied to the Carlin team dropping them back to third place. The penalty was for a driving time infringement, with Ben Barnicoat spending more time on track than was permitted.

The penalty saw the Carlin team of Tincknell, Banicoat and Jack Manchester relegated to 3rd place and the race win awarded to G Drive Racing by Algarve. It delivered a debut Asian Le Mans Series win for the Aurus 01 and for the team’s drivers Roman Rusinov, James French and Leonard Hoogenboom.

The penalty also promoted the Eurasia Motorsport’s #36 Ligier JS P217 into second place. The team drove a strong race with Aidan Read leading for most of the first hour, and with both Nick Foster and Roberto Merhi putting in consistently quick times throughout the race.

After a stunning drive from Chinese driver Ling Kang, the ARC Bratislava Ligier JS P2 was comfortably leading the LMP2 Am class when disaster hit. The car came to a stop in Turn 15, resulting in a full course yellow and handing the class lead to RLR MSPORT. The RLR MSPORT team did not put a foot wrong during the race to claim a comfortable win.

In a truly remarkable performance, the Rick Ware Racing team fought against the odds after a significant shipping delay saw the cars only be delivered to the circuit yesterday. The team impressively managed to get one of the cars prepared and onto the grid for the race. The team’s drivers Cody Ware and Mark Kvamme it was a baptism of fire, but they not only drove exceptionally well but they made their way up the grid to finish on the LMP2 Am podium.

This race was the first time that the two generations of LMP2 chassis have competed in the same race.

In LMP3, reigning Champions Inter Europol Competition in the #13 Ligier JS P3 with Nigel Moore and Martin Hippe kicked off their championship defense in perfect style by taking the race win. It was a solid performance for Norma in their debut with the series, finishing second and third on the podium. In second place is #2 Nielsen Racing Norma M30 of Colin Noble and Tony Wells. Rounding out the podium was the Graff Racing Norma M30, driven by Eric Trouillet, Sebastian Page and David Droux.

In a very busy GT battle, it was Japanese team D’station Racing with their Aston Martin Vantage AMR GT3 driven by Ross Gunn, Tomonobu Fujii and Satoshi Hoshino that claimed victory in the class after a race full of intense battles.

A clash between the HubAuto Corsa and Car Guy Ferraris on track saw a drive through penalty given to Car Guy for causing a collision. There was further drama at the halfway mark of the race when Jun San Chen in the FIST Team AAI BMW M6 GT3 hit the barrier heavily causing a full course yellow. Jun San was uninjured, but team retired from the race.

With half an hour to go it was the Lamborghini Huracan GT3 Evo from JLOC that was leading, however a stop and go penalty for pitstop time infringement saw the Japanese team drop behind D’station to finish in second place. It was a strong performance for the team making their debut in the Series with Andre Couto, Yuya Motojima and Yusaku Shibata.

The stage is now well and truly set for another cracking Asian Le Mans Series. Join us for Round 2 at the Bend Motorsport Park on 10 – 12 January 2020!

Roman Rusinov (#26 G-Drive Racing by Algarve AURUS 01 Gibson): “It’s not the way we wanted to win it, but rules are rules and this is a fair decision. It’s good that we got the points and I’m happy to have won on my first appearance in the Asian Le Mans Series. The top three LMP2 Pro cars were really close throughout the race and it was exciting that the fight for victory went to the last lap. Traffic was the limiting factor, as I was unwilling to make any risky moves, especially on the last lap when I could have been hit with a penalty if I had passed a lapped car under yellow flags. Next time, I’d prefer to win the race on the track, but I’m happy with the outcome."

James French (#26 G-Drive Racing by Algarve AURUS 01 Gibson): “It was an extremely close four-hour battle and the fact it came down to three tenths of a second was extremely exciting. It’s my first time in China and it has been an incredible experience; I’m still getting my head around the scale of Shanghai and the racetrack is amazing, as it has a really good flow to it.

“Everybody at G-Drive Racing by Algarve did a fantastic job, crushing the pit stops to repeatedly get us out in the lead, and everything seemed to go to plan. I sacrificed a bit of performance at the start of the race to finish strongly, because Roman (Rusinov) made it clear that regardless of what you do, it’s impossible to save the rear tires. As a result, my combined stints were good, especially as there were no mistakes, contact or lockups. I’ve enjoyed every minute of my Asian Le Mans experience so far and the result in Shanghai is certainly a good starting point for a strong campaign."

Leonard Hoogenboom (#26 G-Drive Racing by Algarve AURUS 01 Gibson): “Winning our first race in the Asian Le Mans Series on an unfamiliar circuit is a really good result. Roman (Rusinov) and James (French) were great, I feel my stint was good and the AURUS 01 was very fast throughout the weekend. I like these long-distance races and I’ve enjoyed my first experience in Asia, especially as it provided a big challenge. The fact the competition is so tough only makes the victory better."