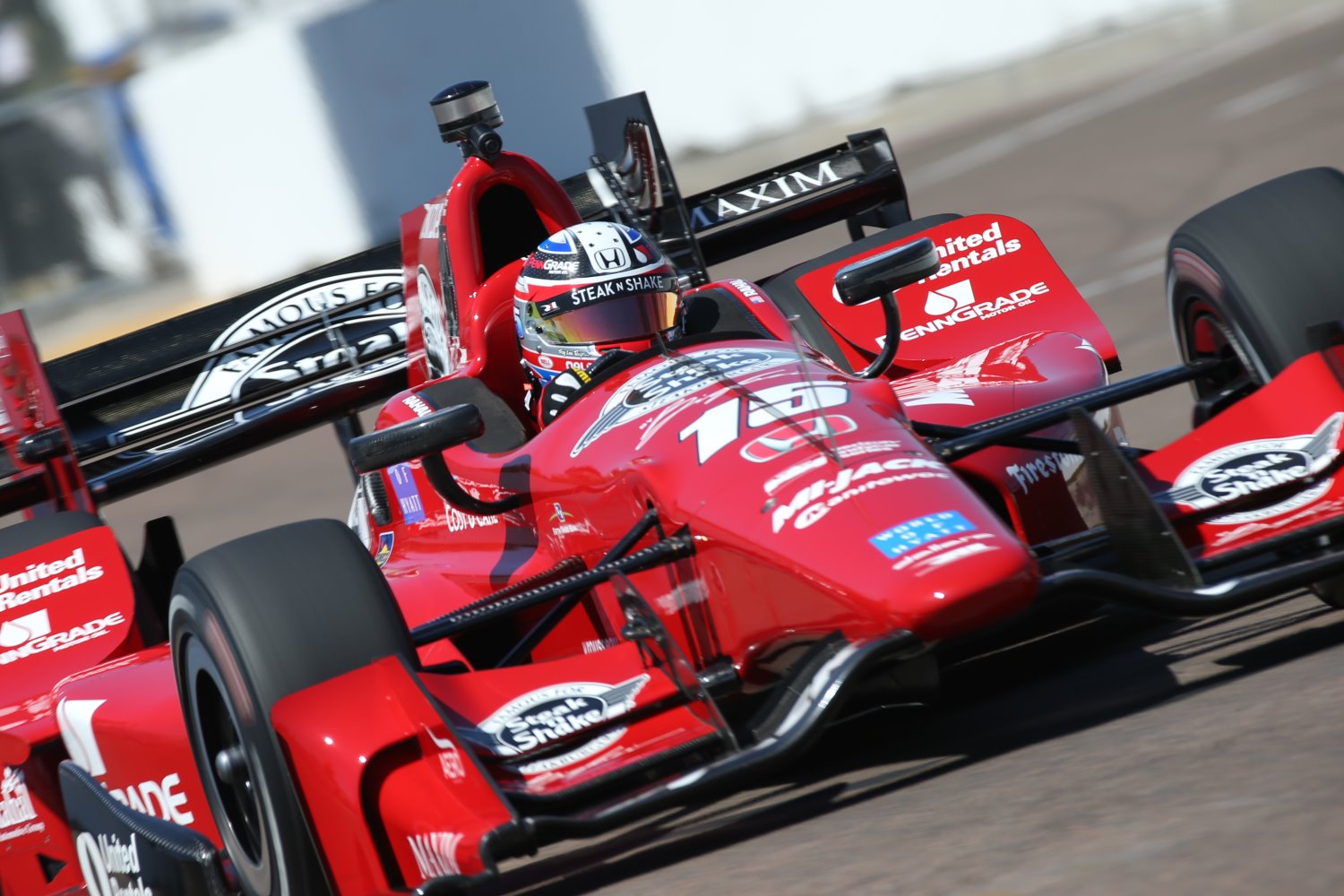 UPDATE We spoke to Matt Brabham today in St. Petersburg after he won the 2nd Stadium Super Truck race and he told us he is trying hard to put together a deal again this year for the Indy 500, hopefully with backing from Pirtek again. And in our video interview with Dale Coyne below you will learn that Pippa Mann has been hanging around the Dale Coyne transporter this weekend and Dale tells us she is being eyed for an Indy 500 deal.

The weather has been perfect so far here in St. Petersburg, Florida but there is a 40% chance of rain at noon today – i.e. race time. Go figure.

Rumor has it that James Davison will have an announcement March 24th or 26th and we can only assume it is about an Indy 500 ride.

We also hear that Buddy Lazier is confident of putting together an Indy 500 deal as IndyCar works to have a full field of 33 cars.

Most of the teams are coming to grips with the new PFC brakes, but Graham Rahal didn't have anything good to say about the new brakes yesterday. Ryan Hunter-Reay lost his brakes altogether in morning warmups and went head-on into the barriers a high speed. Word in the paddock is that any money saved with the new American brakes will cost the teams 10 times more in car damage as the season progresses. It's called being penny wise and pound foolish.

Tony Kanaan made it clear he is not ready to retire yet and expects to drive as long as he is competitive. Like Juan Montoya, will Chip Ganassi force Tony into semi-retirement in exchange for young talent? As long as Kanaan stays competitive we expect he will have a ride.

We hear that Rubens Barrichello has now moved to Fort Lauderdale, FL. Also in Fort Lauderdale are Ryan Hunter-Reay, Helio Castroneves, Gil de Ferran and the AR1.com satellite office. 30 min south are a number of drivers in Miami including Tony Kanaan, Juan Montoya, and others. It's a wonderful part of the country

We hear Kevin Kalkhoven now lives in Sarasota, Florida though he still owns his house in California. Taxes are a lot lower in Florida than California (A tax and spend your money for votes State). Florida has no state income tax, no estate tax, and no inheritance tax.

We hear that Roger Penske will decide on whether to do a sportscar program by this summer for the 2018 season. If he does do it we are told his goal is "to be out front at LeMans."

Word is that ABC and NBCSN are beginning to jockey for position in preparation for the upcoming IndyCar TV bid. The current contract expires with the end of the 2018 season. If IndyCar cannot do a deal to guarantee at least a million viewers each race they can kiss goodbye the idea of landing a third engine manufacturer. IndyCar has been talking to other manufacturers for years but talk is cheap. You can bet they won't ever sign a deal until those TV ratings are north of 1 million viewers each and every race.

It's a chicken and egg deal. If you deliver 1 million viewers per race, every race, sponsors will flock into the paddock (they won't even look at you if you are under a 1.0 rating) , the Verizon title sponsorship deal becomes worth a lot more money, engine manufacturers will take interest, and the series will be on its way to a bright future.

If they put the majority of their races on NBCSN again with its minuscule ratings, the series will continue to flop around like a fish out of water gasping for its last breath. NBCSN does a great production job for its races, but it is not capable of delivering high TV ratings. After NASCAR moved a chunk of their races to NBCSN their TV ratings dropped 50%, and teams now struggle to land full year sponsors and many have walked out of the paddock altogether.

Word is that NBCSN overpaid for their current motorsports deals and are losing their shirts. We do know that in the final years of their NBCSN contract IndyCar is getting paid big dollars – the payout ramped up, starting lowest in year 1 and increasing steadily to year 10 in 2018. Each IndyCar will get two new 2018 bodykits for free – Dale Coyne explains it in the AR1.com video below. After that they have to pay….as they do today. Speculation is that IndyCar is using the big money they are getting paid from NBCSN in the final years of the contract to give the teams the first two kits for free.

We hear that George Steinbrenner IV, great grandson of George and son of Hank, co-owner of the Colton Herta Indy Lights team with Michael Andretti plans to move up to IndyCar with Colton in two years. Herta finished 2nd in his very first Indy Lights yesterday and is on pole for Sunday's race and currently leads. If the 16-year old wins the Lights title this year, maybe we will see him in IndyCars even sooner. Watch our interview with Colton Herta and George Steinbrenner IV and learn that Hank Steinbrenner is a big race fan too. He is here as well.

We hear the teams are wasting a huge amount of money on shock programs. Team Penske always has an unfair advantage and we hear his IndyCar shock program has benefitted from the huge investment Ford has made in their NASCAR shock program – one of the benefits of having their NASCAR and IndyCar programs under one roof.

When you look at the Penske IndyCar shocks they are an engineering wonder. Of course we cannot see the advanced technology inside but the pieces we can see appear to be magnesium – lightweight but expensive.

But why are IndyCar teams spending so much money on shocks? Do fans buy tickets to watch shocks race? Do fans tune into TV to watch shocks race? The answer is no to both. So why then not save the teams a lot of money and switch back to standard shocks? Oh wait, that would take away 'The Captain's Unfair Advantage.'

Roger Penske brought his new yacht here to St. Petersburg and it is quite the boat.

After this race the IndyCar teams all go to Barber Motorsports Park for an open test before heading out West to Long Beach for the 2nd biggest race on the schedule. Mark C. reporting from St. Petersburg.