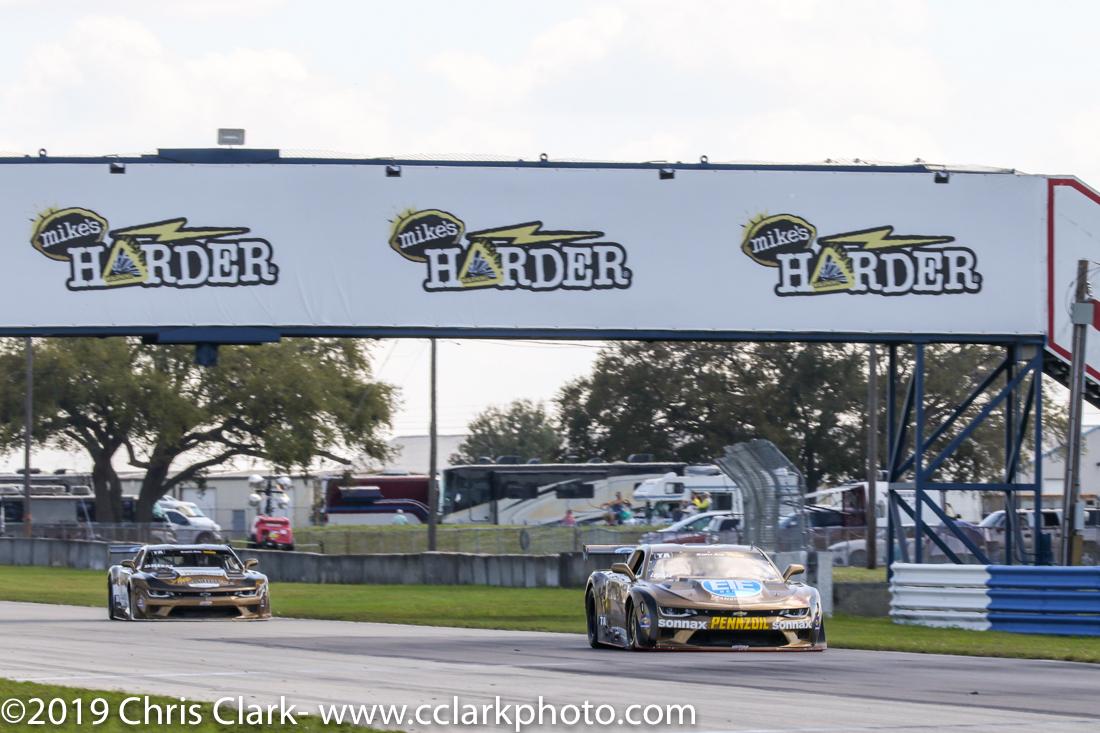 Lawrence Loshak captured the pole position to give Burtin Racing’s gold Chevy Camaros a sweep of the front row in qualifying for Sunday’s Trans Am presented by Pirelli 2019 season-opening event at Sebring International Raceway.

Loshak toured the historic circuit in 3.74-mile circuit in 2:00.427-seconds to earn the pole in the No. 3 Pennzoil/Go Share Camaro, followed by his teammate Tomy Drissi, who carded a fast lap time of 2:01.426 in the No. 8 Axalta Camaro.

“It was a dream lap," Loshak said. “We drivers are always working with the engineers to get that perfect, impossible lap, and we’re always trying to go faster. In a series like this, the guy behind you is going to pass you if you get complacent. The guys gave me an incredible car all weekend. We were P-1 in every session, and then they sprinkled a little special sauce on it for qualifying. They have all the confidence in me, and I came through with a dream lap – and an all-gold front row at Sebring."

“This is Ernie’s home track," Loshak said. “We might be fast in one lap, but we’re not going to take it lightly. But I’m comfortable with Sebring, and I think I just have to go. I’ve just got to be clean and mistake free. I know Ernie, Tomy (Drissi) and Chris (Dyson) aren’t going to make it easy."

Last year’s race winner will have a great view of the start from third on the grid, and has the last lap rather than the first lap in mind for tomorrow.

“I’m not worried about not being on the front row, I think we did a great job for a small team like ours," said Francis, Jr. “We are running stuff that we just work on ourselves. I think the pace that the leaders had today will be hard to maintain in the race and we’ve got a good consistent car for tomorrow, I know this place well, and I think it is going to be a good race here tomorrow."

“The track was very different from this morning’s practice, so I was expecting to be a little bit quicker," Matos said. “It was very hot and the track was slippery, but I had a good enough pace. Our car feels very good and balanced, so I think we will have a real good race car for tomorrow."

Tony Buffomante stayed close to Matos as he clocked the second-fastest lap of 2:08.391-seconds in the No. 34 Mike Cope Racing Ford Mustang.

Marc Miller was third in the No. 40 Prefix/Miller Racing Dodge Challenger, 2:08.662. This is a brand-new car for Miller, who passed Matos with two laps remaining to win the 2018 Trans Am opener at Sebring.

The SGT and GT classes will race concurrently with TA in Sunday afternoon’s event.

Mark Boden was fastest in SGT, seeking his fourth career and third-consecutive SGT triumph at Sebring in the No. 46 Beverage Flavors International Porsche 991 GT3 Cup.

“Considering the temperature cooled down today, I was really able to take advantage of the changing conditions," said Boden, who qualified at 2:09.825. “We had it set up for a one-shot deal, and I didn’t make any mistakes. Now I’m in front when it goes green. We engineer our cars to maintain a fast pace for the entire race. In reality, we might struggle early on, but later in the race we hope to have a better car."

Jeff Courtney led the GT competitors with a lap of 2:15.536 in the No. 88 Matrix/RecStuff.com/Kendra Maserati GT4, followed by Steven Davidson, 2:16.256 in the No. 22 Davinci Plastic Surgery Aston Martin Vantage.

“It was an uneventful lap – the way we like it," Courtney said. “I was hoping for a clear space and a clean lap, and we got it. I didn’t actually get the tires up to the sweet spot, but we did the lap and now we can save the tires for the race. We’re hoping to get to do battle tomorrow."