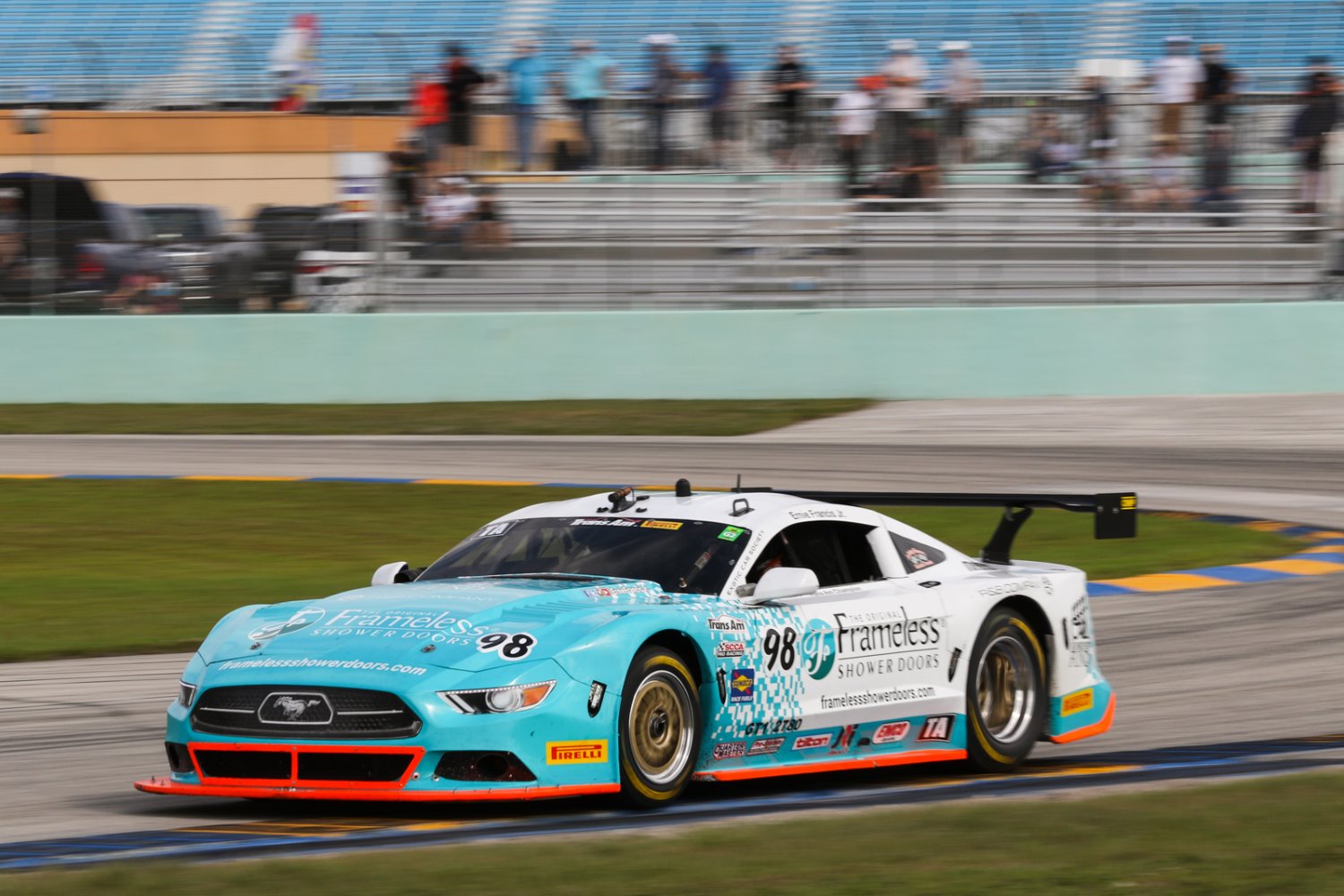 Ernie Francis, Jr., secured his second win of the 2018 Trans Am Championship today by way of a flag-to-flag victory in the South Florida Sports Car Championship at Homestead-Miami Speedway.

The 2017 Champion has now won the past two Trans Am Series presented by Pirelli competitions at Homestead-Miami and set a new track record en route to the winner’s circle. Shane Lewis shared in the celebrations with a TA3 class victory, outlasting Sebastian Carazo after a battle that spanned much of the multi-class competition.

The victory, the 12th of Francis’ career in the TA class, came in dominant fashion on his home track. The No. 98 Frameless Shower Doors Ford Mustang often led the remainder of the TA class field by a gap that extended beyond ten seconds — despite being reeled in by a full-course yellow in the middle of the competition.

“This is our home track," said Francis. “We knew we needed to put on a good show for our friends and family, but the car was absolutely hooked up today. We knew we had the pace from the very beginning of the weekend, right off the trailer. We have a great setup for Homestead-Miami, I have plenty of track time here, and we run old tires during all the testing and practice sessions — it gives you a good feel for what the car will be like here towards the end of the race. While everyone else was slipping and sliding, our car still was hooked up."

Despite the win only coming three races into the 11-round championship, Francis hopes the hometown win will help him go the distances in his TA class title defense, particularly as his multi-series schedule begins to heat up.

“It’s great to have the points lead and grow it a bit more," said Francis. “It’s unfortunate what happened to Chris Dyson out there, but it helps our lead and gives us a bit of a gap. We’re going to need it come Indianapolis; I’ll be missing practice and qualifying due to a NASCAR K&N obligation. I’ll be flying in just in time for the green flag and starting from the back of the pack. It should make for a great show!"

The aforementioned Chris Dyson, in the No. 20 Plaid/ CD Racing Ford Mustang, had worked his way up to second position on the 28th lap of the 45-lap contest but was contacted from behind by the No. 06 Tina Bazuca/ Republica Brewing Chevrolet Corvette of RJ Lopez, causing the No. 20 to spin. Officials black flagged the No. 06 for avoidable contact and ordered a drive-through penalty, which was served.

Lawrence Loshak, in the No. 2 Pennzoil/ ETE/ GoShare Chevrolet Camaro, was able to capitalize on Dyson’s misfortune, retaking his second place starting position while holding off a resurgent Amy Ruman, in the No. 23 McNichols Company Chevrolet Corvette, for the remainder of the competition. In doing so, Loshak secured his first podium of the 2018 season, rebounding in full from a challenging Road Atlanta outing marred by mechanical issues.

The third place finish also marked a return to form for Amy Ruman, securing her first podium finish since Round 9 of 2017, also bidding adieu to her own streak of mechanical frustrations.

The hard-charging David Pintaric, who worked up through the TA class field from 12th starting position in the No. 57 Kryderacing Cadillac CTS-V, would just outlast Dyson for fourth place, but only just. One hundredth of a second separated the two competitors as they passed the checkered flag, side-by-side.

In the TA3 class, Shane Lewis emerged victorious in the No. 28 MGM Porsche 997.2, bringing home a win for the MGM team in its Trans Am debut. Lewis would take the lead from pole sitter Randy Kinsland, in the No. 11 RF Engines Chevrolet Corvette, on the second lap of the contest but was pushed hard following the restart by Trans Am debutant Sebastian Carazo, in the No. 61 Allied Car & Truck Rental Porsche 991.1.

Lewis and Carazo would navigate both oncoming TA class traffic and their own back-and-forth battle for the remainder of the race, with Lewis only truly gaining separation with three laps remaining.

“It was an amazing battle with Sebastian," said Francis. “It was just back and forth; he’s an awesome driver –the guys prepped an awesome car. After the restart, I really wasn’t sure what was going to happen. We obviously didn’t want to get involved in the TA class’ race, but we had a battle of our own too. It just shows the professionalism of all the drivers involved that we could race that hard and keep it clean amongst classes."

Lewis will return to the Homestead-Miami track this afternoon in the TA2 class’ Muscle Car Challenge, where he will start from pole in pursuit of his second Trans Am win of the day.

Carazo would secure second place in the TA3 class, while Dave Ricci, in the No. 71 Florida Roadway Signs Chevrolet Camaro, completed the production class’ podium.

For his hard charge to the front of the field, David Pintaric was awarded the CoolShirt Systems Cool Move of the Race. RJ Lopez finished sixth to secure a Southern Cup best finish in the TA class, while Alline Cipriani received the distinction in the TA3 class. Kerry Hitt, in the No. 19 ACP Cadillac CTS-V, led the masters division.

The race would undergo a single full-course caution spanning from the middle of lap 19 to the start of lap 23, to retrieve the No. 57 of Simon Gregg stopped on-course in an unsafe position. The competition spanned 45 laps, 102.15-miles, around the 2.27-mile, 10-turn modified road course at Homestead-Miami Speedway.

The Trans Am Series presented by Pirelli will hold another 45-lap competition at Homestead-Miami later this afternoon, the TA2 class exclusive Muscle Car Challenge powered by AEM, with an anticipated start time of 2:00 PM EDT.

The Trans Am Series will return to action at Indianapolis Motor Speedway on June 15-17.

All results provisional until posted final.