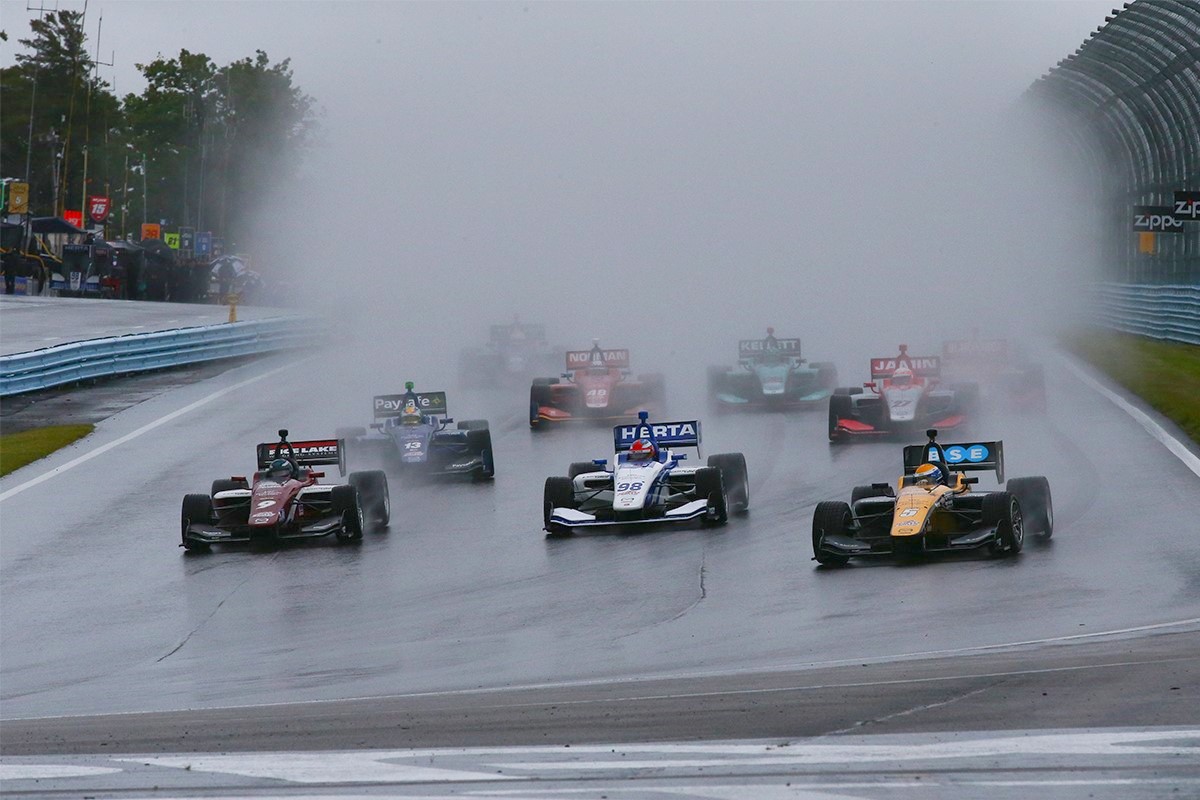 Telitz’s Belardi Auto Racing teammate, Santi Urrutia, from Uruguay, finished in second place, well clear of Andretti-Steinbrenner Racing’s polesitter Colton Herta, from Valencia, Calif.
Steady rain shortly before the start ensured the entire field was on wet-weather Cooper tires, and following an additional pace lap to permit the drivers an opportunity to assess the track conditions, it was Herta, the youngest driver in the field at age 17, who led on the long downhill run toward Turn One. Telitz, who started third, immediately thrust to the inside under braking to claim the advantage, only for Herta to fight back as they swept into the uphill Esses for the first time.
Urrutia, too, was in the mix, ensuring a spectacular first few laps as the three leaders traded positions numerous times before Telitz overtook Herta one more time in opportunistic style at Turn Eight. He then began to edge away as Herta and Urrutia continued to squabble over second place.

Urrutia finally made the position his own on Lap Seven, but by then the impressive Telitz was already nearly seven seconds up the road.

Herta couldn’t match their pace but still remained clear of Andretti Autosport teammate Nico Jamin, from Rouen, France, who had overtaken Zachary Claman DeMelo (Carlin), from Montreal, Canada, on Lap Four.
Urrutia set sail – almost literally – after Telitz, narrowing the deficit to around four seconds before Telitz responded with a new best lap of the race on Lap 14, just as the yellow flags flew after Andretti Autosport’s Dalton Kellett lost control and crashed at the Inner Loop.
The rain intensified during the clean-up process, leaving officials no choice but to display the red flag in the hope that conditions would improve. Thankfully, they did, and after a 12-minute delay the race was on again for a seven-lap dash to the finish.
Telitz was unfazed, despite intense pressure from his more experienced teammate, Urrutia, who, coincidentally, had preceded him as winner of the Pro Mazda Championship Presented by Cooper Tires in 2015. The pair romped clear of the field, with Telitz posting three successive fastest laps of the race to seal the victory and ensure that he ended the season as he had begun it on the streets of St. Petersburg, Fla., in March – with an emphatic victory. He also claimed the Staubli Award.

In addition to cementing his unenviable position as championship runner-up for the second successive year, Urrutia’s second-place finish ensured a come-from-behind victory in the Team Championship for Belardi Auto Racing by a slender four-point margin over Andretti Autosport.

Herta finished third ahead of Carlin’s Matheus Leist, from Brazil, who earned the Tilton Hard Charger after a fine drive from ninth on the grid.
All three series which comprise the Mazda Road to Indy Presented by Cooper Tires will celebrate with a traditional end-of-season banquet tomorrow evening, Monday, in Watkins Glen. A total of $2,682,000 in Mazda Scholarships and awards will be distributed, including a prize valued at $1 million which will guarantee Kaiser entry into three Verizon IndyCar Series races in 2018, including the 102nd Indianapolis 500.
Aaron Telitz (#9 Mazda/Rice Lake Weighing Systems-Belardi Auto Racing): “I think relief is my primary emotion – the team joked with me that I might not remember how to get to Victory Lane. But it was a great way to end the year. It gives me a lot of confidence going into the off season, thinking that all the hard work was worth it. But it was pretty slippery out there! The start was tricky but I had some rain experience here earlier in the year – we did a Cooper Tire test and it was raining in the afternoon, so I thought I would go out and run in the rain. I did about 10 laps, so I knew where the grip was going to be on the track, whereas everyone else was still figuring it out. But by the end of the race, Santi figured it out. I knew the red flag would be coming but I didn’t want to win it in the pits. The team was telling us that if we finished 1-2 we would win the team championship, so ‘don’t crash’ was definitely coming through on the radio."
Santi Urrutia (#5 Belardi Auto Racing w/SPM): “Aaron and I had different setups and I had problems on the first part of the track. The car was good but I was struggling early to find the lines. I had some chances to pass Aaron, especially on the restart when he made a mistake in Turn One but after that we were running the same speed and I decided to stay in second place. That earned us the team championship and vice championship for me again. I had some issues early in the season but when we got them sorted out everything started going the right way. We had a really strong second half so we have been competitive. My goal was to win the championship but we were 11th after Road America. To finish second is good. It was a good year – I won my first oval, which was great, and I hope I can go to IndyCar next year."
Colton Herta (#98 Deltro Energy Mazda/Andretti-Steinbrenner Racing): “It was hairy for sure, going side-by-side through the Esses on the first lap. It was my first time in the wet with the car so it was a learning experience for the first few laps but I got settled in and started working on getting my lap times in and not making any mistakes. We had an amazing year, just missed tying my dad for poles in a season – thanks, dad! It was a good year. I got a ton of experience in all different kinds of conditions and I loved it! I hope to be back next year."
Kyle Kaiser (#18 Juncos Racing): “I never could have imagined this at age 7, getting into a kart for the first time. It has been an absolute dream. But it’s been a strange feeling today, because it wasn’t the best race. The championship never entered my mind during the race – I was just trying to manage the conditions. I think these were the trickiest conditions we’ve had all year. I tried pushing and that’s why I spun. But I just really wanted to bring the car home. We just won the Indy Lights championship and it’s time to celebrate. When I got to the podium and Dan Andersen, John Doonan and Chris Pantani were there to give me the champion’s trophy, I started to realize that it was real.
“I am so appreciative of my time on the Mazda Road to Indy. The new Indy Lights car has been a perfect transition. The experience I’ve gained these past three years, not rushing it or wanting to move up too soon has been so valuable. All the race experience will translate into IndyCar."