Beaudesert-product Chaz Mostert used his track knowledge to record the fastest lap time in history at Queensland Raceway during this afternoon’s second practice session at the Coates Hire Ipswich SuperSprint.

Current championship leader Scott McLaughlin was fastest in practice one earlier today but it was Mostert who claimed the honors in the second session in perfect weather conditions at Queensland Raceway this afternoon.

“Pretty happy with my car, still think it needs a bit of work maybe on the race car side of things, but yeah when the eight came up I was pretty shocked," Mostert said.

“We have take taken on the K.I.S.S philosophy – keep it simple stupid – and bought it back to where it had been happy before.

“Look I don’t think we are miles off where we need to be but there are definitely some errors we need to work on." 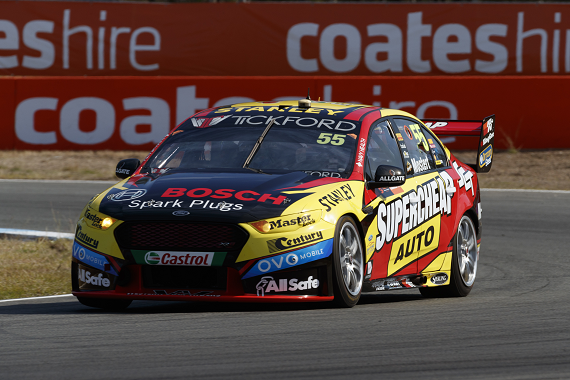 Coulthard said he was pleased with today's times following disappointing results in Townsville saw him slip from first to third in the championship.

“I think everyone is going to have a bad one at some stage, back in the old days you could delete a bad round but unfortunately these days you can’t so we just have to cop it," Coulthard said.

“We did a lot of learning it’s been a long two weeks but I think we have come back and learnt a lot in that little break hopefully we can build on it and go good from here on in."

Craig Lowndes, a 12-time winner in Ipswich, wasn’t far off the pace on one of his favorite tracks, registering the seventh fastest lap time this afternoon.

McLaughlin will go into tomorrow’s opening qualifying session as a firm favorite to claim his tenth pole position of the year. The young kiwi 12 straight front row-qualifying performances which is a championship record in the modern Supercar era.

Qualifying gets underway at 1:30pm AEST tomorrow ahead of the opening 120km race at 4:15pm AEST. Qualifying and a 200km race will be held on Sunday.