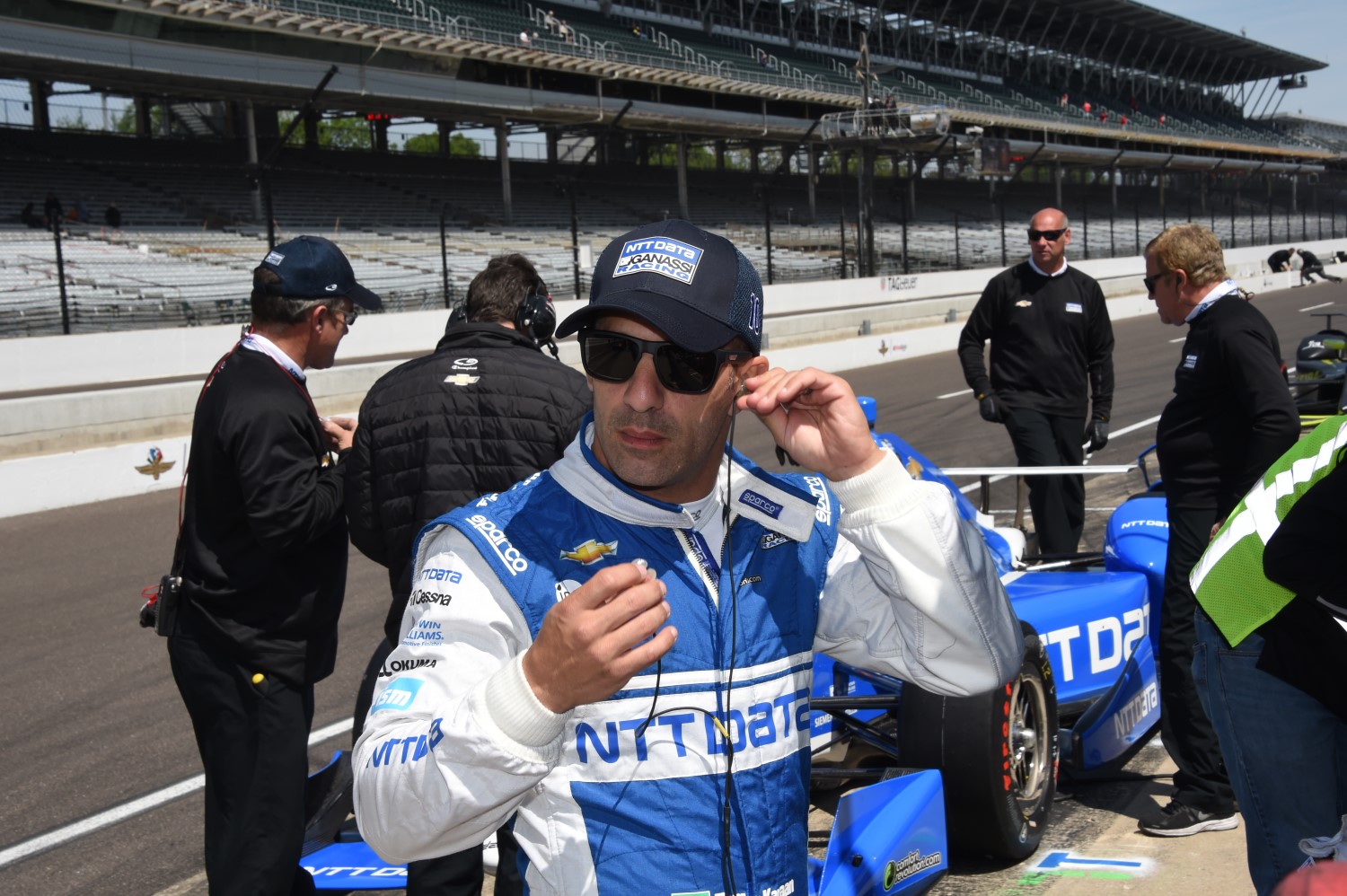 MODERATOR: Tony, I know that it's an unusual situation, I just asked Carlos this, particularly with all your laps and years here. I came in Monday thinking it would be sort of a slow day and all of a sudden I look out and people are three wide in four.

TONY KANAAN: You should have asked me, I would have told you different.

MODERATOR: Why, what do you think is the biggest difference was in that?

KANAAN: I think in the past years we don't need to save engines on Carb Day anymore, which used to be the case. We use this as the last — this is the closest we get to the race, two days, and after being here for almost a month, the engineers come up with different plans every day. The more time you give them, the more they come up with stuff. And we had almost five days without being on track, so they go back to the shop and do simulations and stuff and come up with new stuff. So we had to test. And I think everybody is eager to feel how the car behaves in traffic. So we — it was a race out there today, that's for sure.

MODERATOR: Given the fact of where you are, did you think your car behaved particularly well in traffic?

KANAAN: I'm happy. I'm happy with my car. Obviously I have to pass 17 people before I get really happy with my car. But, you know, after the struggle in qualifying, we really focused, me and Dixon, on the race and I think you can see both of us up there. You know, anybody count us out, it's a big mistake. But it will be more exciting for the fans. I'm amazed how many people are here today. It's really — I thought all of my 15 years I had seen it all here, and clearly I didn't. So I can't wait until Sunday.

MODERATOR: We will take some questions from people who have written Tony Kanaan off in the race and those who still think that he can win, which includes me.

KANAAN: Still time to go to Vegas, 10 to one, and I have a pretty good chance.

MODERATOR: Questions for Tony Kanaan before we let him go?

Q:Tony, what are your impressions of this 100th 500 and your place in the race on Sunday?

KANAAN: The pressures of the race, it's like I said, it's been an unbelievable experience. I'm so humbled to be able to be part of this. I mean, I've always wanted to be in this race since I was a little kid. I've never really came to this place until I actually raced in 2002, so I really haven't experienced what people had told me when this place is sold out, how does it feel when you go out, you know, go to in the tunnel and you experience the crowd. Because it's definitely more crowded. I've been here, like I said, for 15 years and I've never, never seen anything like this.

So I'm enjoying it. I hope with this it's the big jump that we needed to bring the 500 back to where it belongs. And you know, we can gain new fans this year, the word is out there so they can come back for many years to come. So that's my view of this 100. And for me, first of all, I've never thought I was going to be competing on the 100th Indy 500. That didn't even cross my mind. We don't count 500s, right? So to me it's a different experience. I'm happy with my car. I hope we can put a good show for the people that are paying to come here because they deserve it. They make it a very unforgettable moment for me for sure.

Q:Tony, you talked about your starting position going into the race. What is your strategy, to be patient, let things kind of play out? Do you want to get to the front right away? How does that change during the race?

KANAAN: It's tough to plan anything because you don't know what the others are going to do. But one thing that eases my mind a little bit being back there, there are a lot of good guys back there with me. You know, if you look around Montoya, Charlie Kimball, Scott Dixon, they're very experienced guys back there, which sometimes it's not the case.

So I really don't have a plan. My plan is to start the race. If there is a gap, I'm going to go for it. I mean, I've always done that on the starts, and then probably just look how the race is going to play out. I think patience is going to be a big factor here because it's not as easy to pass as it used to be in the recent years. So you're going to have a tendency of people being extremely impatient and putting where two cars don't fit. Being extra cautious I don't think is going to be a bad thing. As usual, after the last stop, it's time to go. And that's when the race really begins, you know, after the last stop.

Q:Tony, you mentioned your struggles in qualifying, making those adjustments with the engineers over the course of the week. How much more confident are you today after posting the time that you did and speed you did?

KANAAN: I was comfortable on Monday. I was just relieved that qualifying was done because we definitely struggled. So today we made a couple more changes in the car and the thing was really fast. So I'm happy. That doesn't mean anything. I had fast cars here, I didn't finish the race. I had slow cars I thought wasn't going to go anywhere and I kind of won the race.

So it's — I would say one more time, I think this track will pick the winner. Whatever she picks, it's going to be a very lucky guy. So I'm trying to massage the track a little bit, talk to her nicely and then see if she will pick me on Sunday.

KANAAN: I hope so.

MODERATOR: Are you glad practice is over and we're getting ready to just get down to the race.

MUNOZ: For me the practice was over Monday. After Monday the car is what is is for the race. Today was just a practice to check the car was good. You know, was running good, the engine, everything just took a little bit dial stuff. But the conditions are going to be totally different again for the race. I think I've been to whole practice, qualifying in the top of the chart. That doesn't mean anything. But, you know, I feel good with the car.

MODERATOR: But you've been near the top almost every day. So you obviously have had a pretty good car in all those different conditions.

MUNOZ: Yeah, been all the time in the front. I think that showed the speed. But, you know, like today the speed doesn't matter where you are. Even last spot will be really happy for my car for the race. It doesn't matter if you're last on Carb Day or first because everyone has different stuff. Some runs you feel really good, some runs you feel really bad. Because you have new tires, you put on old tires, it's hard to judge when you practice. But I get my feeling and it was a good feeling for myself.

MODERATOR: Do we have any questions for Carlos?

MODERATOR: I have one. One more. That was quick.

I've never seen so much action on that Monday practice that we had. I was thinking it would be a slow day. And, frankly, in years past we've had a lot of people come in on Carb Day and not see that many cars get out there into the action. Were you surprised by that yourself?

MUNOZ: Yeah, Monday we knew it was going to be a really busy day, packed race. Today as well was a packed race. No one wanted to lead in the front the last few minutes. No one wants to lead, everyone wants to go to the back of the field and try their car out. So it was really intense a little bit for being especially Monday. You see some guys passing in Four or Two, it was risky for the practice. But everyone wants to try the car I think this year; all the 33 drivers want to win this race. I think all of them can come in contention for the win. They look strong, a lot of them. I think this is the closest competition ever.

MODERATOR: Very good. Anything else?

Carlos, now you can bolt.