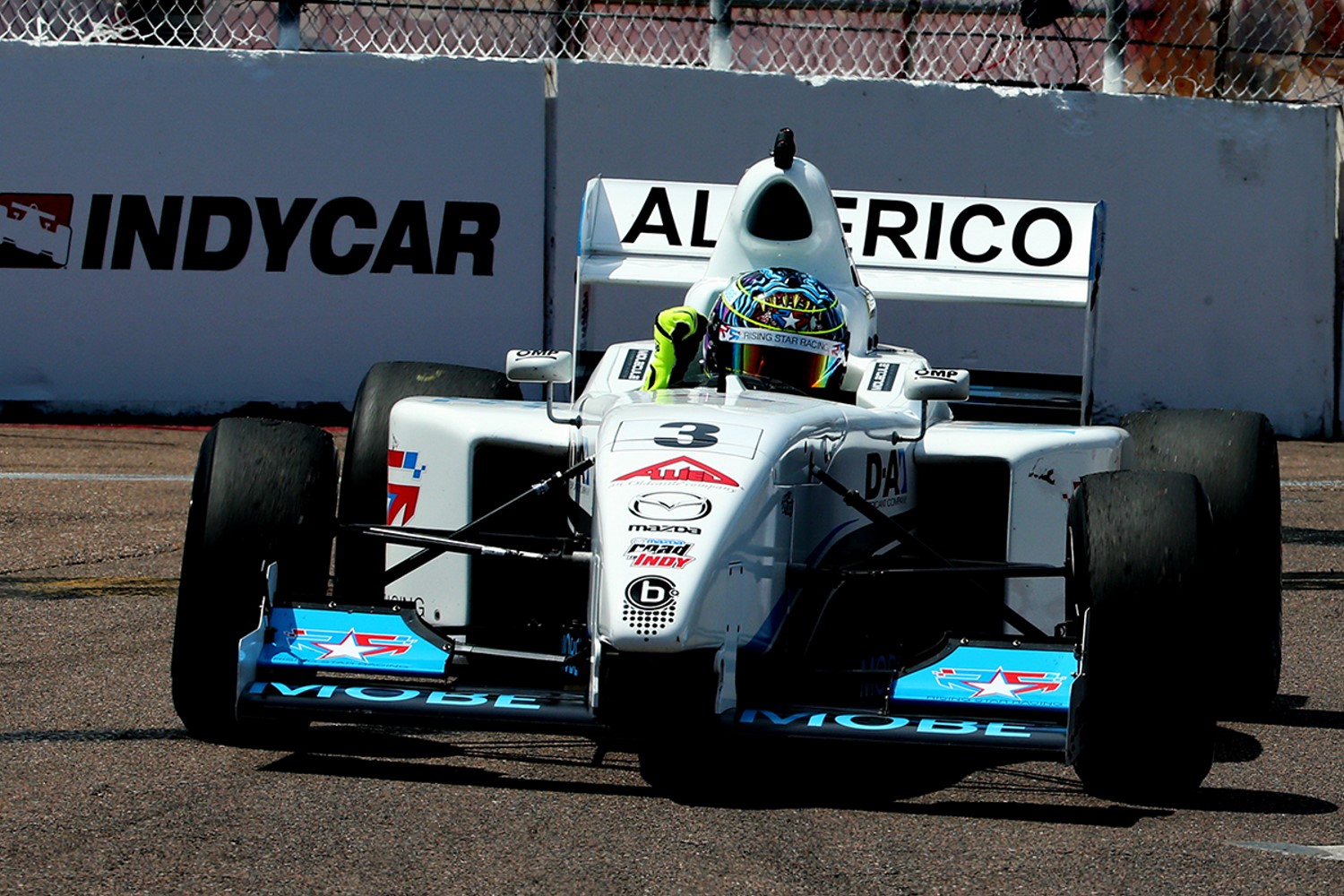 New Orleans, La. (8 April 2015) – Rising Star Racing drivers Neil Alberico and Josef Newgarden will be back in race action this weekend for the inaugural Indy Grand Prix of Louisiana event. Held at NOLA Motorsports Park, the Pro Mazda presented by Cooper Tires series will stage Rounds 3 & 4 of its championship and the Verizon IndyCar Series will feature Round 2 of the championship at the 13-turn, 2.74-mile road course.

Alberico will target a return trip to the podium after having dominated the streets of St. Pete two weeks ago. Driving the No. 3 Cape Motorsports with Wayne Taylor Racing entry, he qualified on the pole and led every race lap of the weekend to take victory in Rounds 1 & 2 of the 2015 Pro Mazda Championship.

"We couldn't have opened the season any better and that's just a testament to the hard work everyone at Cape Motorsports has put in," said Alberico. "We know we have what it takes to win and every time we arrive at a race track, we expect to win. But, it's a long season and the ultimate goal is to win the championship so right now we're just taking it one race at a time and trying to get as many points as possible out of each event that we can."

The 22-year-old Californian is in his sophomore season of Pro Mazda competition and ran at NOLA just over a year ago in the Pro Mazda Winterfest. Despite having run at the course before, he will have some learning yet to do at the track because the NOLA circuit has been updated since the Winterfest outing in 2013.

Newgarden recently tested at the updated NOLA road course and will look to put the data gathered to good use this weekend. He finished 12th in St. Pete two weeks ago with the No. 67 Hartman Oil Chevrolet for Carpenter Fisher Hartman Racing after sustaining damage to the car during the race. He will look to improve on that result when the Verizon IndyCar Series debuts at NOLA on Sunday.

"I'm really looking forward to getting back out with the CFH Racing team in New Orleans," said Newgarden. "It's an exciting new market for everyone in IndyCar racing, everyone has been putting in a lot of work to make this event successful and hopefully grow for the future. We're hopefully going to maximize the weekend for ourselves as we continue a race for the championship. New Orleans is going to be critical for us to try and keep the positive momentum going and score solid points. That's our goal. Everyone's been working really hard at CFH Racing and I think we have gotten all of our cobwebs knocked out now, so hopefully we can hit the ground running when we get to New Orleans and finish strong."

Both Alberico and Newgarden had the opportunity to experience the famous New Orleans atmosphere earlier this year when the two took part in Mardi Gras festivities. As part of IndyCar's promotion of the Indy Grand Prix of Louisiana, Alberico and Newgarden rode on the Krewe of Bacchus Carnival float and tossed IndyCar branded beads to tens of thousands of people along a six mile parade route.

"Mardi Gras was one of the craziest things I've been a part of!" said Alberico. "It was so much fun and it was great to take in the city away from the track. So many times when we visit a new city, the only places we see are our hotels and the racetrack, so it was awesome to have the time to actually see and experience New Orleans!"

"You really feel the southern hospitality there," added Newgarden. "It was amazing to explore the city and it was a great way to kick off our venture into a new market."

While the weekend does not feature the Indy Lights as part of the event, Rising Star Racing's Spencer Pigot will none the less be on hand for the race weekend. He is set to play host to some Rising Star Racing sponsor guests as well as make an appearance on the PA with the Voice of the Mazda Road to Indy, Rob Howden.

It will be a busy weekend of on track action as Pro Mazda gets underway on Thursday for three test sessions ahead of official practice on Friday. Pro Mazda qualifying will take place on Saturday morning at 10:40 AM CT and Race 1 is set to go green at 5:50 PM CT Saturday. Pro Mazda Race 2 will run on Sunday at 12:50 PM CT. All Pro Mazda sessions can be followed with commentary and scoring via the Mazda Road to Indy App or at racecontrol.indycar.com.

Newgarden first takes to the track on Friday for Verizon IndyCar Series practice. A third practice will be held Saturday ahead of qualifying which is scheduled to begin at 4:15 PM CT. The green flag will wave on the Indy Grand Prix of Louisiana on Sunday at 2:37 PM CT with LIVE coverage beginning at 1:30 PM CT on NBC Sports Network.

Live commentary and scoring is available on the Verizon IndyCar15 App.