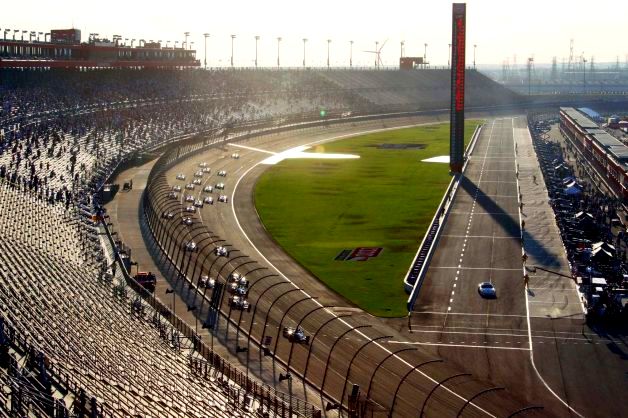 (3) Estimated attendance is predicated upon what one believes to be the proper percentage of occupancy in the lower rows and upper rows:

It is important to note, that at the farther reaches of the Upper Rows of available sections, there were few fans, while in the center sections, some were close to 80% occupied. The key to the estimate, thus, is the average occupancy across all 47 sections.

(5) A more important question is why there was a mass exodus from the infield suites at 8:00 p.m.?

Also why was there a sizable number of fans leaving from the main grandstands with 50 laps to go? Mordichai Rosen, Los Angeles, CA

09/19/12 Dear AR1.com, I am a first time commentator, long time subscriber (since you erected the pay wall). I happened to attend Saturday night’s race as I have with a multitude of oval, road and street course races in addition to the Indy 500 (of course). Let me say that I completely disagree with your assessment of attendance. It is believable to me that there were 25,000 to 30,000 in attendance as quoted by several press accounts.

Of course, if you count people in the multitude of suites, this number becomes more credible if you disagree that the open stands were nearly half full. The upper half section of the open grandstand the length of the press box was nearly completely occupied and bottom section across from the start-finish line was pretty well populated. Of course, the rest of the open stands were pretty sparse but, unlike the old IRL days, free tickets were not given out in mass. It is also worth considering the absence of Marlboro’s complementary tickets (10,000 plus).

I attended the 2010 Homestead race as well as the 2011 Kentucky race. There is no doubt in my mind that there were FAR more people in attendance than both of those races. I know nobody is claiming that Homestead or Kentucky had even 20,000 in attendance (probably closer 10,000 or 15,000), but I will go to my grave knowing that the MAVTV 500 crowd was easily twice the size.

I am not trying to be unrealistic as I am aware of how much IndyCar has eroded in popularity over the past decade. [I remember the 2000 Marlboro 500 featuring nearly a full house.] However, I do think that it is irresponsible of you to continually beat-down Indycar’s oval product and prospects. The constant negativity and your editorial slant is killing me. I am an old CART guy too, but ovals (at least a few) are vital if the series is to grow moving forward in the US. I really appreciate road and street courses, but they are more of an acquired taste. If IndyCar were able to televise Saturday’s race on network TV, I have no doubt that more than a few casual fans could be minted. If there continues to be a title sponsor for Fontana and IndyCar gives it at least three years, the Southern California fans will make this a permanent stop on the circuit. Regards, Tom Astbury, Indianapolis, Indiana

09/18/12 Another reader writes, I'm going to make this very simple, I have been a fan for over 20 years and while I have attended the LBGP for the last 20 years I would never want the season ending race to be a street/road circuit. I went to the season finale race in Fontana for the first time and LOVED IT. I have been to many other tracks and I'll say the main reason why I thoroughly enjoyed the race was the ending. When the race finished fans were able to cut across the track and get up close and personal with the winning teams of Ed Carpenter and RHR. That was a big highlight for me and when a series is trying to dig up support, that's what needs to happen. That was fan interaction at its highest level. Can anyone name me another track where a regular ticket holder can get next to the winning car, driver and owner and watch the award ceremony up close and personal? I was able to give a quick word to Randy (in victory lane) and tell him that this is why this track is excellent…fan interaction. Ending a season on a super speedway is the only track that it should end on. I hope the schedule reflects that next season. Dan Michaelian, San Jose, CA

Dear Dan, When the crowd is so miniscule any track can let the fans up close to join in the celebration. Otherwise crowd control would be an issue. Ending the season on an oval is fine, but why not a 2nd race at the Brickyard instead where you could draw 100,000 instead of 10,000? Mark C.

A reader writes, Dear AR1.com, 30,000 at Fontana Saturday night? I was there and I can assure you it was closer to 10,000. Maybe they gave away another 20,000 free tickets but those people did not show up. As you can see from the photos I have attached, 30,000 is not possible. First of all 2/3 of the grandstands were closed, so to get 30,000 the center section would have been 100% full. Pictures do not lie. Not even close. The center section was 1/3 full. 1/3 of 30,000 = 10,000. That 30,000 estimate must have included the gnats and flies in attendance as well. As far as I am concerned, the race made IndyCar look like a loser. Much like Las Vegas last year where they could not give away tickets, their big grand finale and hardly anyone bothered to show up. So lets do more oval races, Yeah, that's the answer. Mordichai Rosen, LA, California

09/17/12 Quote of the week: "Saturday, the cars that are billed as the fastest in the world were so scary they frightened off a big crowd. Or maybe it was the heat, which was in triple digits all day, right up to green flag time in the early evening." — Gregg Patton, Press Enterprise

To be sure, a huge crowd wasn't expected this year because of IndyCar's lengthy absence from the Fontana track and the sport's overall struggle to gain a wider following.

That hasn't stopped another IndyCar race in Southern California, the Toyota Grand Prix of Long Beach in April, from attracting sizable crowds. But that race on the city's seaside streets has more of a festival atmosphere and did not have a seven-year gap in events.

The question now is whether Auto Club Speedway will be back on IndyCar's 2013 schedule, which hasn't yet been announced. Before the race, IndyCar Chief Executive Randy Bernard said he was "proud of the effort" Auto Club Speedway made to market the race and that "we stand pretty optimistic" about IndyCar returning. But Bernard said he first wanted to see the race: "Quite honestly, we need to see what happens at Fontana and how it turns out." LATimes

09/16/12 Another reader writes, Having read your article about promotion for the Indy Car Fontana race, maybe they did their heavy promotion in the Inland Empire ( the area around the California Speedway). I live in Orange County (about a 45 min drive from Fontana) and the promotion was almost non-existent, except for the Auto Club members magazine. Maybe I managed to miss it all.

Another item that affected attendance was the weather. We had one of our Sept. heat waves yesterday. Here in Orange County (where I live is about 10-15 miles from the beach) it was 106 deg when the TV broadcast started. My guess was that it was at least 115 deg in Fontana. These aluminum benches at stands at the track must have been hot enough to give 2nd degree burns then.

I noticed close to the end of the race that more people were in the stands. Honestly, it was the worst circumstance for weather for anyone to want to go to the track. Mike Weyhrich

Dear Mike, We all know about the September heat waves in southern, California. Been happening for 10,000 years. Shame on IndyCar for scheduling a race there that time of year. It's common sense really. Mark C.

09/16/12 A reader writes, Dear AR1.com, Last nights IndyCar season finale at Fontana was a very good race, so hats off to all involved, but does IndyCar have a death wish? For two years in a row now they held their championship deciding grand finale on an oval track because some people in IndyCar still think ovals are important. Given the near 100K grandstand seats at Fontana, and given they were 10% full at most (and that is being generous) there could not have been more than 10,000 fans in attendance. How did that look to existing and potential sponsors? I can tell you how it looked. Those massive number of empty seats made IndyCar look like a dying series. Talk about a PR disaster. Will they ever learn? Really, AR1.com predicted it would be a PR disaster when they announced the race, and that prediction certainly came true. Dave Beatus

Dear Dave, Yes, it certainly was a PR disaster from that standpoint. However, that will pale in comparison to the PR disaster they will have if they return to Pocono Raceway next year as rumored. The grandstands will again look empty, only worse. As Einstein said, "The definition of insanity is doing the same thing over and over and expecting different results." The only ovals IndyCar should be racing on should be Indy of course, Texas, and those with 25,000 or less grandstand seats. Unfortunately, except for Iowa, there are not too many of those. Mark C.