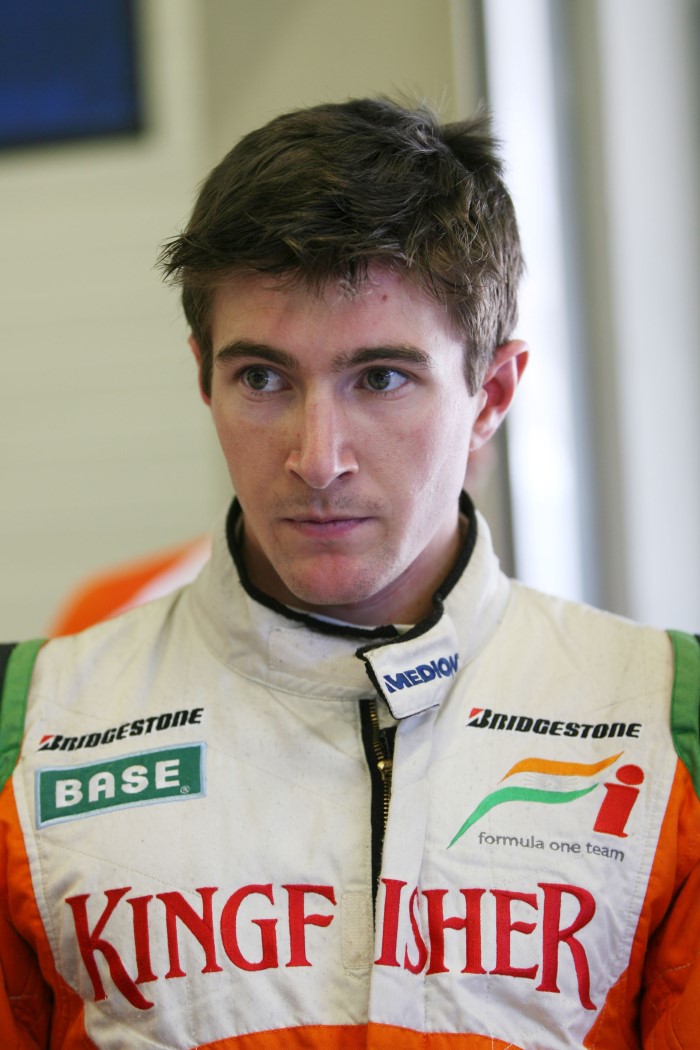 J.R. Hildebrand enjoyed a fruitful and impressive first-ever taste of a Formula One car today during the rookie-only test session at the Circuit de Jerez in southern Spain.

The 2005 Team USA Scholarship winner and reigning Firestone Indy Lights Champion completed a total of 49 laps in the Mercedes-Benz-powered Force India VJM02 during the morning session before relinquishing the car to Scotland’s Paul di Resta for the afternoon period.

Hildebrand topped the timing charts several times during the morning, and had set the third fastest time when he climbed out of the car shortly after midday. His best lap of 1:20.537 remained good enough for fifth fastest out of the nine drivers who posted laps during the morning. All of the teams who contested this year’s FIA Formula 1 World Championship were present, with the exception of Toyota which has since withdrawn from F1 competition.

"The track was clearly improving throughout the morning, so based on the program we were running, in terms of relative pace we were doing pretty well," said Hildebrand, 21, from Sausalito, Calif. "After a brief red flag at the beginning of the session, we started into our planned testing program for the day. We ran pretty basic settings on the car to help give me a feel for the various adjustments that the car has, as well as some different tire compounds.

"My first impressions of the car were that it’s just incredibly quick and capable, and it’s definitely different to what I’m used to in its general attitude through the corner as well, so that took a bit of getting used to.

"I felt I was getting there and was starting to get the most out of the car, particularly toward the end of the morning. I think we still had some free time in the car. I lost my best lap by using a bit too much of the road, and on my last run I just flat-spotted the tires straight out of the pits, which made a drastic difference in how good the car was and I really couldn’t get the ultimate lap time from it. It was a little bit frustrating from the standpoint of losing the last two runs, but we were fifth quickest when my day was effectively done so I was pretty happy with my first outing."

A second American, 18-year-old Alex Rossi, also took part in the test as his prize for winning the 2008 Formula BMW World Finals. Rossi, from Nevada City, Calif., set the day’s seventh fastest time overall, 1:20.227, after completing a total of 82 laps. Hildebrand ended the day ranked 10th overall among the 12 drivers who posted times.

Hildebrand and di Resta will continue to share the car when the three-day test resumes tomorrow (Wednesday), with di Resta driving in the morning and Hildebrand taking the afternoon stint.

"I think I could have probably done a better job of putting a few more full laps together [today], but was definitely pleased to see that it looked like much of the time gained by the other guys through the day was due to the track improving," said Hildebrand. "The roles are reversed for us tomorrow, so if nothing else, I certainly expect that by the time I get in the car, the grip will be quite a bit higher than when I drove it today and I’ll really see what the car can do! So I’m looking forward to getting back out there."