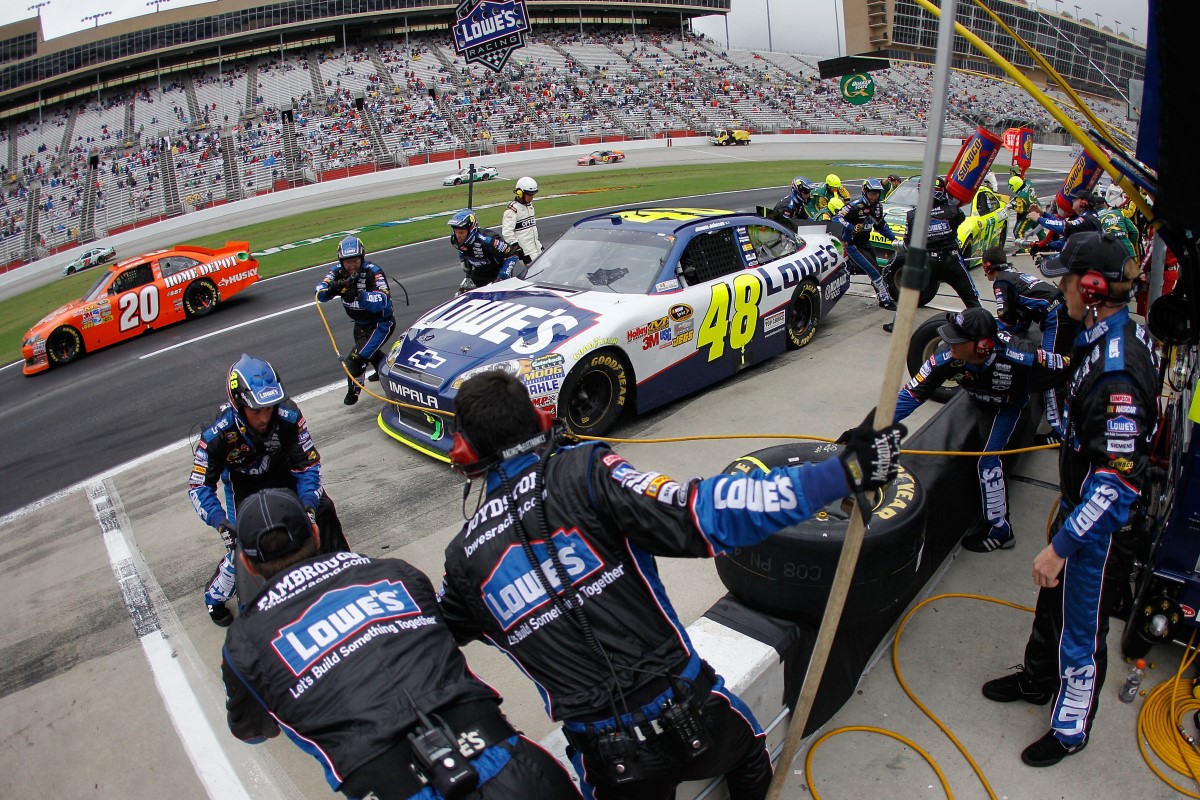 HAMPTON, Ga. — Kevin Harvick was on a multi-topic roll. A discussion of the convergence of mechanical engineering and sports marketing. Not a problem. It's Atlanta. It works.

That Cup cars were speedier at Atlanta Motor Speedway than conventional wisdom suggested following NASCAR mandates that reduced horsepower and downforce? The defending series champion had the explanation.

"When you slow them down, going down the straightaway, they're going to get faster through the center of the corner," said Harvick, who won his first career race here in 2001 and led 195 laps last fall before finishing 19th.

And then a dissertation on Atlanta as a market, as the scant few who attended Cup qualifying on Friday vacated the cavernous premises.

"You know what? I hope they have a phenomenal weekend because this is one of the greatest race tracks on our circuit," Harvick said. "You hear a lot of talk about a lot of different things and crazy things happening and the weather being as cold as it's going to be this weekend. This is one of the greatest race tracks that we race on. It produces some of the best racing and this race track needs to stay on our schedule because it's a great place to race."

"The first couple of laps here are pretty exhilarating to be honest with you," Edwards said. "You've got to catch your breath, because you drive down the corner here and you're not flat on the floor just picking the best line. You've got to drive the car down in the corner, manhandle it, slide it sideways and deal with all the balance and things like that. It takes a couple to get used to this place and get comfortable."

Atlanta as a venue continues to get comfortable with yet another change to its date after six years on Labor Day weekend. Few tracks enjoy the "date equity" that promoters crave, where a race is pegged to the same general time each season, increasing awareness, and expectation that simplifies marketing.

Speedway Motorsports Inc. was also tasked this year with the unenviable job of promoting this weekend's event with just six months of notice. It was not an easy ask for a fickle market that has lost two NHL franchises and grew tepid even during the Braves' heyday in Major League Baseball the 1990s, even in the supposed heart of NASCAR's Southern fan base.

"Atlanta is known as a tough ticket-selling market by everybody in the business as entertainment. It doesn't matter if you're NASCAR or the business of concerts or any other sport," SMI chief executive officer Marcus Smith told USA Today Sports. "I think for Atlanta Motor Speedway, we've got a new weekend here, following the Daytona 500, we've had less time to sell tickets, but I think what we have is going to be a really good weekend."

And the weekend will continue, Smith said.

The facility ceded one of two races beginning in 2011 to SMI venue Kentucky Speedway but will not see its remaining date go the way of the Flames and the Thrashers, he said. Atlanta without a Cup date would be an almost unthinkable proposition for the series and elicited a chuckle in Smith.

"There's nothing afoot," he said.

Except with those speeds.

NASCAR attempted to reduce speeds and stimulate passing beginning this weekend by reducing engine horsepower by 125 hp from 850 to 725 hp with tapered spacers and trimming rear spoilers by two inches from eight inches to six, ostensibly making cars slower and harder to drive. Tire wear endemic to the mature racing surface creates slippery racing conditions favored by drivers and fans. Speeds remain brisk — with Joey Logano smashing Harvick's 2014 Atlanta pole figure by more than four mph — but such was the anticipation of drivers, Harvick said.

"This is a unique situation though," Harvick said, "because the car is probably making eight or nine percent more downforce just because it's 40 to 50 degrees cooler than when we were here last year. So that's really one of the biggest reasons that the speeds are up. That's the biggest reason."