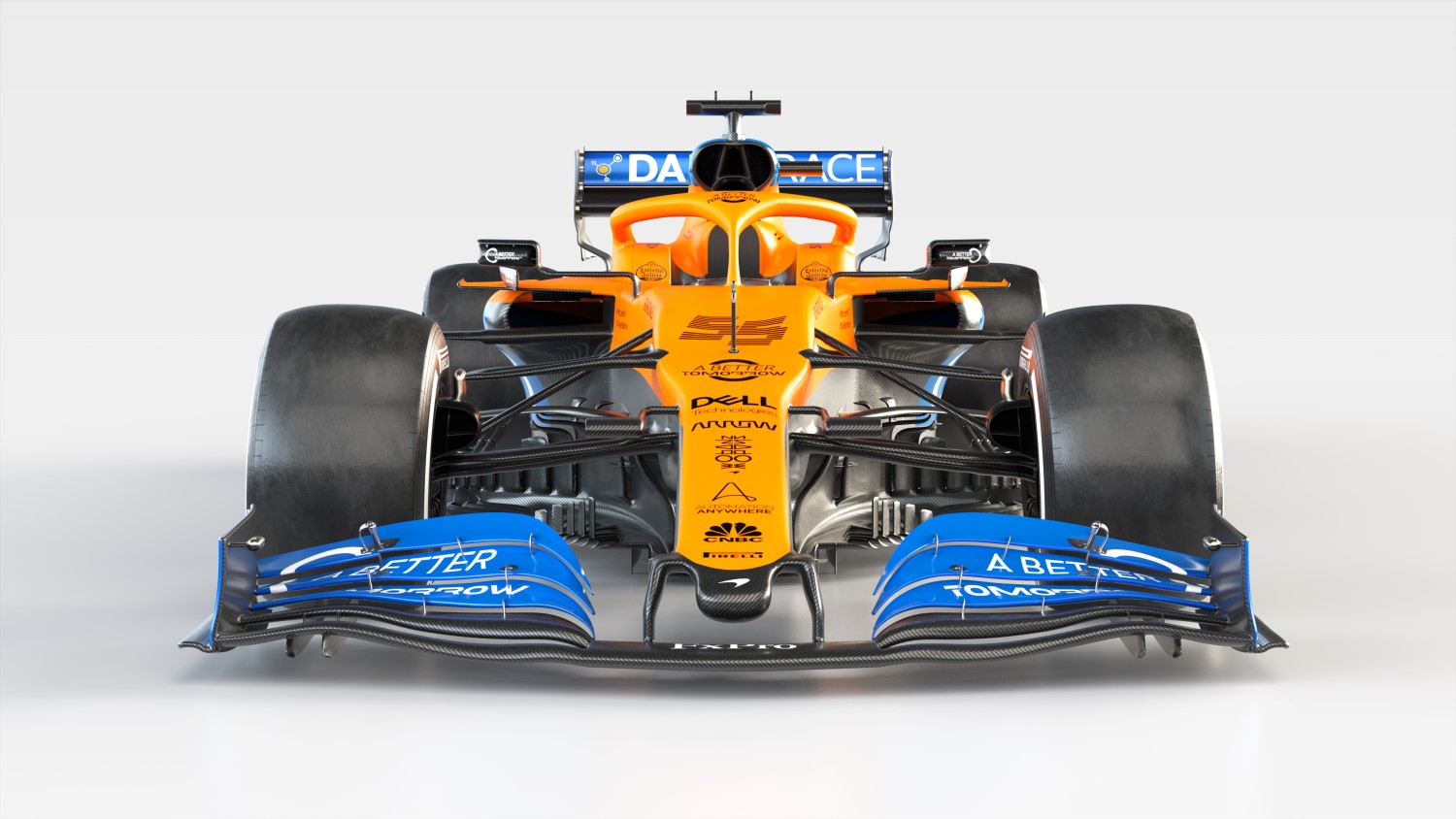 McLaren Racing today unveiled the team’s 2020 F1 car, the MCL35, live from the McLaren Technology Centre to a global audience. Drivers Carlos Sainz and Lando Norris, who both enter their second season with the team, proudly presented the car ahead of it taking to the track for the first time during pre-season testing next week.

McLaren set to work on the MCL35, which is powered by the Renault E-Tech 20, during 2019 as the team pursued the first phase of its performance recovery program. The season saw the team climb to fourth in the FIA Formula 1 Constructors’ World Championship and provided valuable insights for the development of the MCL35, in what will be an intensely competitive 2020 Formula 1 season.

[adinserter name="GOOGLE AD"]The MCL35 continues to sport the striking McLaren papaya and blue, the original colors chosen by founder Bruce McLaren and representing the team’s 57-year legacy in the sport. The dynamic new livery is the essence of form and function; designed to further increase stand-out on the grid while being fully optimized for racing performance.

McLaren has also continued its positive commercial trend, with eight new partners for 2020, broadening the team’s partner family to 38 partners in total.

The MCL35 will make its official on-track debut during pre-season testing at the Circuit de Barcelona-Catalunya in Spain on 19 – 21 February and then again from 26 – 28 February. Carlos and Lando will share the driving duties across both tests.

The front wing seems to be distinctly similar to last year's design – and perhaps there's more to come from McLaren in that area.

Looking at the suspension the top wishbone is mounted to an extended 'horn' attached to the upright, which was first explored last year in practice at Spa.

“I’m immensely proud of the entire team today. Last season we delivered what we set out to do – secure a hard-fought fourth in the Constructors’ Championship. Our positive on-track momentum and the renewed energy in the team has seen us grow our valued partner family and global fan base and we look forward to a hugely competitive season. While we are enjoying going racing again, we remain measured and focused, and all of us at McLaren keep pushing fearlessly forward."

“This is an important moment for the entire team. Yesterday evening, after many months of hard work from all the men and women at McLaren, our people were the very first to see the MCL35, before we showed it to the world today. Every team member has invested a great deal of time and energy during this pre-season in designing, engineering and producing the MCL35 ready to take to the track for the first-time at pre-season testing. Carlos and Lando showed real grit and determination last season and have continued to work hard in preparation for testing and the season beyond. We look forward to building on what was a very positive first year with them behind the wheel.

“Today is another step on our journey. It is important not to be complacent, this will be a tough season. Nothing comes easy in Formula 1 and the competition at the head of the midfield will be intense. We have six days of testing to prepare for the start of the new season and Carlos, Lando and the whole team here at the MTC and at track are ready. We go again."

“Today is a big day for all of us! I’ve followed very closely the making of the MCL35 this winter and I know how much effort and passion we’ve put into it. Many may consider 2020 to be just a gap year between the old and the new regulations, a mere continuation of 2019 into 2021. However, at McLaren, we pushed the ‘reset’ button after the checkered flag in Abu Dhabi and we’ve worked extremely hard to try and improve every single detail of our car.

“The solid jump forward we made last season was a huge motivation but, at the same time, a strong reminder of how tight the fight continues to be in the midfield. We can’t afford to sit back in 2020 if we want to close the gap to the top. The ambition is to push myself and the team to take another step forward this season, and I’m looking forward to Barcelona testing and continuing the positive momentum we started last year."

“I think the MCL35 looks great with its updated livery – I think our fans will love it and I’m really excited to drive it for the first time. A lot of hard work and development have gone into this car from the design team, the engineers, the car build team and Carlos and myself, and it’s a special feeling to have been involved in its evolution.

“My rookie season was an incredible experience and I learned a lot from the team and from Carlos. With my first year under my belt I feel more confident as a driver and in the feedback I can provide to my engineers as we keep pushing the performance of the car throughout the year. We aren’t setting ourselves targets yet for this year as we know it’ll be tough to maintain the position we ended 2019 in, but I’m looking forward to seeing where we are compared to our top competitors in testing and going racing again."