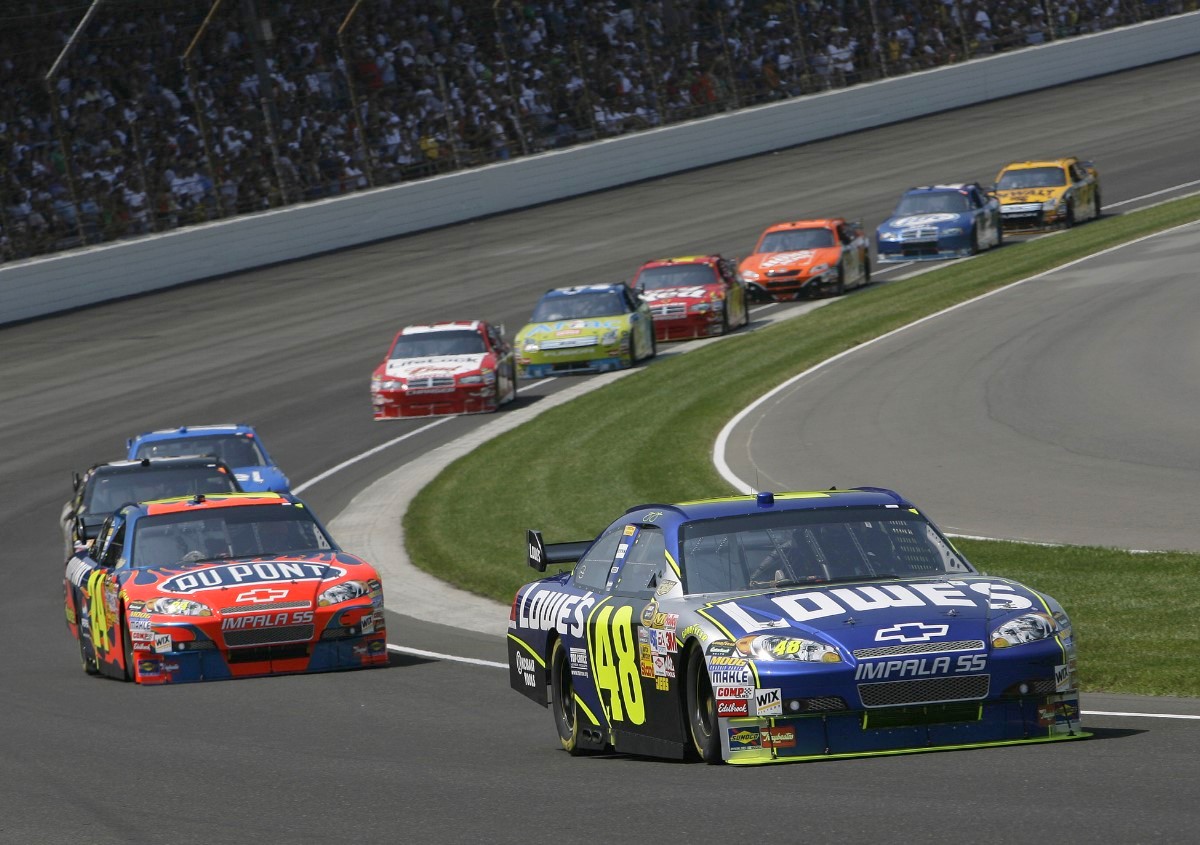 Fan activities continue to be added to the schedule for Chevy Day at the Brickyard on Friday, July 24, at the Indianapolis Motor Speedway, the opening day of the 16th Allstate 400 at the Brickyard.

The pit walk is open to all fans.

More drivers also have been added to an autograph session Friday morning.

A special autograph session with four-time Brickyard winner Jeff Gordon presented by Chevrolet will take place at 11:45 a.m. Friday in the Chevy Pace Car room in the Pagoda. The first 100 people in line at 8:30 a.m., rain or shine, at the Chevy Display in the Hall of Fame Museum East parking lot will receive wristbands to participate in the Gordon autograph session. All participants must have a wristband, regardless of age.

Chevy question-and-answer sessions with two-time Allstate 400 at the Brickyard winners Jimmie Johnson and Tony Stewart and Brickyard-winning team owner Richard Childress also have been added to the Friday schedule. Johnson will participate at 9:30 a.m., Childress at 11 a.m. and Stewart at noon, all on the Chevy Stage at the Chevy Display.

Racing fans also can test their golf skills Friday morning and have a chance to win a 2010 Chevrolet Equinox in the Chevy Golf Shootout from 9 a.m.-noon at the No. 8 Hole tee box at Brickyard Crossing Golf Course.

The Fan Pit Walk, growing number of drivers signing autographs, Chevy Q&A's and Chevy Golf Shootout are enhancements to this Chevy Day at the Brickyard schedule:

General admission tickets are $10 for Friday, with children ages 5 and under free.

Newman won a Silver Crown race in 1999 at ORP, the same year he captured the National Championship in the class.

"Indianapolis Raceway Park will always hold a very special place for me," Newman said. "Winning the 'Night Before the 500' was the biggest race win of my career back then – it was like winning the Daytona 500 at the time. There was a huge crowd, and it was a very special moment for me and my entire family because on that night, I was the best driver in Indianapolis. That was what we had worked for since I started driving quarter-midgets when I was just 4Â½ years old. For me, that was a huge night not only personally but also for my career. I feel like that race win is what helped me get to where I am today.

"I love having the opportunity to go back and race at ORP. But getting the chance to get back to my roots and race with these guys in the USAC series is a lot of fun. I ran in the Silver Crown race last year and finished second. The race stayed green almost the entire night, and my car wasn't quite fast enough to catch the leader. It's becoming a tradition that when I come out to Indy for the Brickyard, that I'm going to run in the Silver Crown race on Thursday night."

Newman, a native of South Bend, Ind., will drive the No. 39 U.S. Army Chevrolet for Stewart-Haas Racing in the Allstate 400 at the Brickyard on Sunday, July 26 at the Indianapolis Motor Speedway.

IMS still intimidates Gordon: Even though he has won the Allstate 400 at the Brickyard a record four times, Jeff Gordon still is intimidated by the unique shape of the 2.5-mile oval at the Indianapolis Motor Speedway.

"The first couple laps around the track you always use too much brake," Gordon said. "The straightaways are really long, and you build up a lot of speed. You have this tunnel vision, and all you see is wall and grandstands. The corner appears to be extremely tight and extremely narrow – and it is.

Gordon, who grew up in nearby Pittsboro, Ind., said the IMS oval poses challenges because it's the only track with all four corners connected by straightaways.

"There is no other track like this, and it has four unique corners," Gordon said. "Actually, I think it has eight unique corners. The entry into each of the four corners is different, and I look at the exit of each as a different corner, as well.

"Exit speed is important, especially leading onto the long straightaways."

Good tires: Richard Childress Racing teammates Jeff Burton and Clint Bowyer are convinced that the tire problems that plagued the 2008 Allstate 400 at the Brickyard are history.

"The tire test was phenomenal," Burton said. "I was really happy with what went on there. I went there feeling skeptical and was nervous about it. I don't like doing tire tests at tracks that have tire problems. It is not always the best feeling.

"But from the first lap on the track, I really liked the way the tire felt. We didn't see one issue with the tires. They ended up putting those tires on everybody's car for a day and a half. We would run the car completely out of fuel and then re-fuel before going out on another run. To my knowledge, there was not a blister or a cord. So it was a great test."

Said Bowyer: "They've definitely done their homework. You can tell from the rubber stuck to the underside of the hood. The tires are back to being gummy and not producing a powder like they did last year."

RCR has two victories in the fabled event, with drivers Dale Earnhardt in 1995 and Kevin Harvick in 2003.

Double-file restarts exciting: There are plenty of storylines entering the Allstate 400 at the Brickyard on July 24-26 at the Indianapolis Motor Speedway, with tires being a main topic for many fans and media.

But ESPN NASCAR lead announcer Dr. Jerry Punch also thinks the debut of double-file restarts in a NASCAR event at IMS also is a big story.

"I think this year's edition of the Brickyard 400 has all of the ingredients to be the best one yet," Punch said. "Now people might say that's just hype, but if you look at everything that's lining up this week, this one has a lot to offer. When you couple the added grip of the new tire with the double-file restarts, I think we're going to have some 'hold your breath' moments throughout the race coverage."

The first- and second-place drivers will line up side-by-side as the green flag flies for each restart. Under the previous format, cars on the lead lap would restart in a single-file line while cars that had been lapped would start in an adjacent line.

NASCAR instituted the new system effective at the race June 7 at Pocono Raceway.

ESPN begins its 2009 NASCAR Sprint Cup Series coverage this weekend at the Brickyard.

Johnson auction to benefit charity: The steering wheel from the No. 48 Lowe's Chevrolet that defending race winner Jimmie Johnson will drive Sunday, July 26 in the Allstate 400 at the Brickyard will be auctioned on eBay to benefit the Jimmie Johnson Foundation.

A custom-designed Momo steering wheel that Johnson will use will be up for bid July 23-Aug. 2 on ebay.com/jimmiejohnsonfoundation.

"We are honored that Momo wanted to partner with us on this special wheel," Johnson said. "I don't usually give up many of my race-used items, so I hope the fans enjoy this opportunity to have a part of my car from one of the biggest races of the season. If it's like last year, the wheel may have a little Gatorade on it from victory lane."

Momo custom-designed the steering wheel for Johnson and donated it to the Foundation to help with the organization's efforts to assist those in need. The wheel features the Jimmie Johnson Foundation logo embroidered on the center pad and the embossed Momo logo and the embroidered No. 48 logo on the 6 o'clock spoke. The wheel is covered with Momo's trademark racing suede and has been dyed blue for this special initiative.

Pacers' pride: Indiana Pacers 2009 first-round draft pick Tyler Hansbrough is excited to wave the green flag to start the 16th Allstate 400 at the Brickyard on Sunday, July 26. Hansbrough, a 6-foot 9-inch forward selected with the 13th overall pick in the NBA Draft, is the event's grand marshal.

"I'm really looking forward to this," Hansbrough said. "I'm honored to have been selected and I heard when Reggie Miller waved the green flag to start the Indy 500, he said it was one of the coolest things he has ever done so I can't wait."

Pacers' legend Miller was the honorary starter of the 2005 Indianapolis 500.

Speed's seconds: If Scott Speed qualifies for the Allstate 400 at the Brickyard in the No. 82 Red Bull Toyota, he will record two historical seconds in the annals of the Indianapolis Motor Speedway.

Speed would become the second driver with that racy last name to make an Allstate 400 at the Brickyard start, as Lake Speed (no relation) made the race for four consecutive years from 1994-97.

Scott Speed also would become the second driver to compete in both the United States Grand Prix Formula One race and Allstate 400 at the Brickyard at IMS, following in the tire tracks of Juan Pablo Montoya, who remains the only driver to race in those two events and the Indianapolis 500. Speed competed in the USGP in 2006 and 2007 at Indy.

Tickets for the two remaining events in 2009 at the Indianapolis Motor Speedway – the Allstate 400 at the Brickyard and Red Bull Indianapolis GP – can be purchased online at www.indianapolismotorspeedway.com at any time.