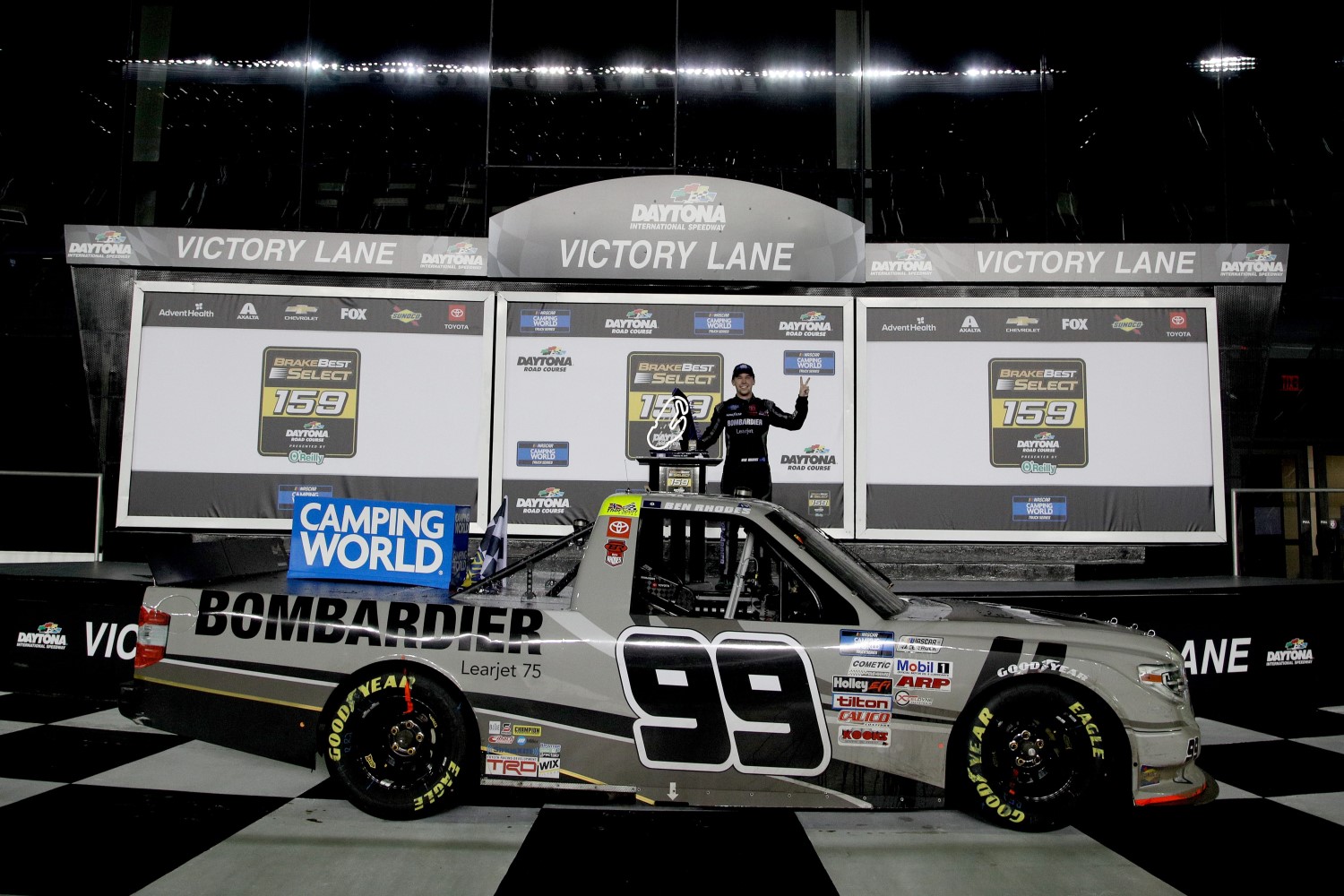 In overtime on the Daytona Road Course, Ben Rhodes (shown above) drove his #99 Toyota Thorsport Racing Truck to victory over the #2 Chevy Truck of Sheldon Creed Friday night in the Brakebest Pads 159.

It was back-to-back wins for Rhodes from Kentucky who won on the Daytona oval last week.

John Hunter Nemechek was third in his #4 Toyota. Todd Gilliland (Ford) and Riley Herbst (Ford) rounded out the top-5.

Rhodes, 23, of Louisville, Ky., crossed the finish line 0.320-seconds ahead of Creed – the running order frozen, however, when a caution – one of 10 on the night – came out with a half-lap remaining in overtime.

John Hunter Nemechek, who won Stage 1 and led 14 laps on the night, finished third. Todd Gilliland, who started 31st, rallied to an impressive fourth-place finish and Riley Herbst rounded out the top five.

Matt Crafton, Derek Kraus, Kaz Grala, Timmy Hill and Christian Eckes completed the top 10. Rookie Hailie Deegan was running in the top-10 until a spin on the final lap of overtime. She finished 28th.

“Unbelievable, I don’t even have words for it,” Rhodes said after climbing out of this truck just below the flag-stand on the frontstretch. “I don’t even know what to say, this is so cool.

“I just have to thank my team. The Bombardier Tundra was fast all day. ThorSport Racing gave me a truck that handled this year, and we were fast. Rich (Lushes) is a really good crew chief. It’s good to be paired up with him and all of the guys on my team. I’m just thrilled. I don’t know what to say. I’ve been on cloud nine all week, so it’s above that. I’m just so happy.”

Certainly, Rhodes was in a celebratory mood following the race, but it was a tense finish. He was about 50-yards shy of the flag-stand on the first overtime period when a caution came out extending the race instead of earning him the trophy then.

He and Creed – who led a race best 17 laps – dueled for the lead multiple times in the closing laps – often exchanging the point during the infield series of turns of the road course.

“Never fun being the first loser,” Creed said. “But my guys brought a fast truck and I felt like we were on top of the strategy there going to slicks early. Man, got hit by a lapper there leading, and I don’t think that did us any favors and got to the lead, saving fuel and then worked way back to the lead got pushed out the way on the restart, just doing everything I could there. Wished it could have stayed green.”

The race started under wet conditions with teams having to decide when the track was dry enough to switch from rain tires to slicks or “dry” tires. Nemechek was the early leader – pacing the field for the opening 14 laps until his No. 4 Toyota suffered an oil pressure and fuel pick-up problem, leaving the Tundra on track and necessitating a caution. Later he ran out of gas and at one point was a lap down to the leaders before racing back to the front in the closing laps.

Rhodes had to deal with Creed and then ultimately Nemechek’s comeback as well, to earn his fifth career victory.

“It was the most stressful race of my life for sure,” said Rhodes. “There’s been stressful races, but this was really stressful. I thought it was going to be taken away from us for sure.

“I’m not sure if they showed me throwing my hands up, I hope they didn’t. Hope they didn’t listen to the radio either. I was a little frustrated. Gosh, it all worked out now. So stressful, so stressful. I don’t think I’ve had one that stressful before.”

How do you describe this week and this moment?

“It’s unbelievable. I don’t have words for it. I don’t even know what to say. This is so cool. I just have to thank my team. The Bombardier Tundra was fast all day. ThorSport Racing gave me a truck that handled this year, and we were fast. Rich (Luches) is a really good crew chief. It’s good to be paired up with him and all of the guys on my team. I’m just thrilled. I don’t know what to say. I’ve been on cloud nine all week, so it’s above that. I’m just so happy.”

Can you describe your emotions after winning at Daytona for a second time in seven days?

“We did the sweep. I didn’t know that there was a sweep possible at Daytona, but we did it. I don’t know what to say. This Bombardier Tundra was fast from the get-go. Starting on the pole, I knew that if we just played it safe, if I gave up the lead – I didn’t care about the laps led, none of that stuff. We didn’t need an ego, we needed to win the race. We played it smart all day. The rain was so fun. I prayed for the rain before the race, and we got it. I just wish it had stayed the whole time because we were making so much hay once I got the handling down on it. I honestly didn’t want it to go dry, but I guess I’m glad that it did because it worked out okay.”

How difficult were all the restarts at the end of the race?

What does it mean to get the 200th win for Toyota in this series?

“So cool. 200 wins for Toyota, I’m so proud to be able to get that for them. You always want to be the guy who delivers for people, and I’m glad that I could be the delivery man. That’s so cool. Toyota, they’ve given so much support to us. I think that’s a big reason why we’ve been in victory lane both weeks.”

What has it felt like to come out so strong with Toyota in the first two races back?

“It feels good to sweep Daytona for them. I saw Jack Irving (TRD) over in victory lane and it’s a sweet homecoming. It makes everything worth it. For Duke and Rhonda Thorson (team owners), they put so much into this, so much effort and so much time out of their days. They have so much other stuff to worry about than just running a race team and they do so good with it, they’ve done it for so long. For them to be in the position they’re in now and with the drivers they have now, the people on the team they have now, I truly believe I have the fastest teammates in the series. They set themselves up so well with this new partnership and I couldn’t be more proud of the team and just so grateful for the place that I’m in. I’m so grateful for it. I count my blessings every day because it’s such an honor to race for them. I tell them all the time how much I truly mean that.”

Can this be a championship season?

“It’s looking better now with these extra Playoff points. I’ve learned that Playoff points are the winning ticket. They get you to the final four and I guess we’re at 10 now or maybe 11. That’s such a relief and we came into this race, I finished horrible here last year, had a horrible race last year and basically fell out of the seat. I was struggling physically hardcore with all the heat at this race. I was a little intimidated coming back to this road course, not going to lie. I feel like to conquer this and to conquer the speedway, this is our championship year, I really believe that. I don’t know, a lot of racing left and a lot of season left so we’ll see what happens.”

What has the switch back to Toyota done for the ThorSport Racing team?

“It’s been huge. The support we get is unparalleled and the fact that their (Toyota/TRD) engineering, their engineering is what it’s all about. We’re not a Cup team, we don’t have 30 engineers. We’ve got a few, we’ve got our little engineering department that could and we get so much support from them that it bumps us to the next level. They don’t do it like anybody else and I think that’s why they have 200 wins now in the Truck Series.”