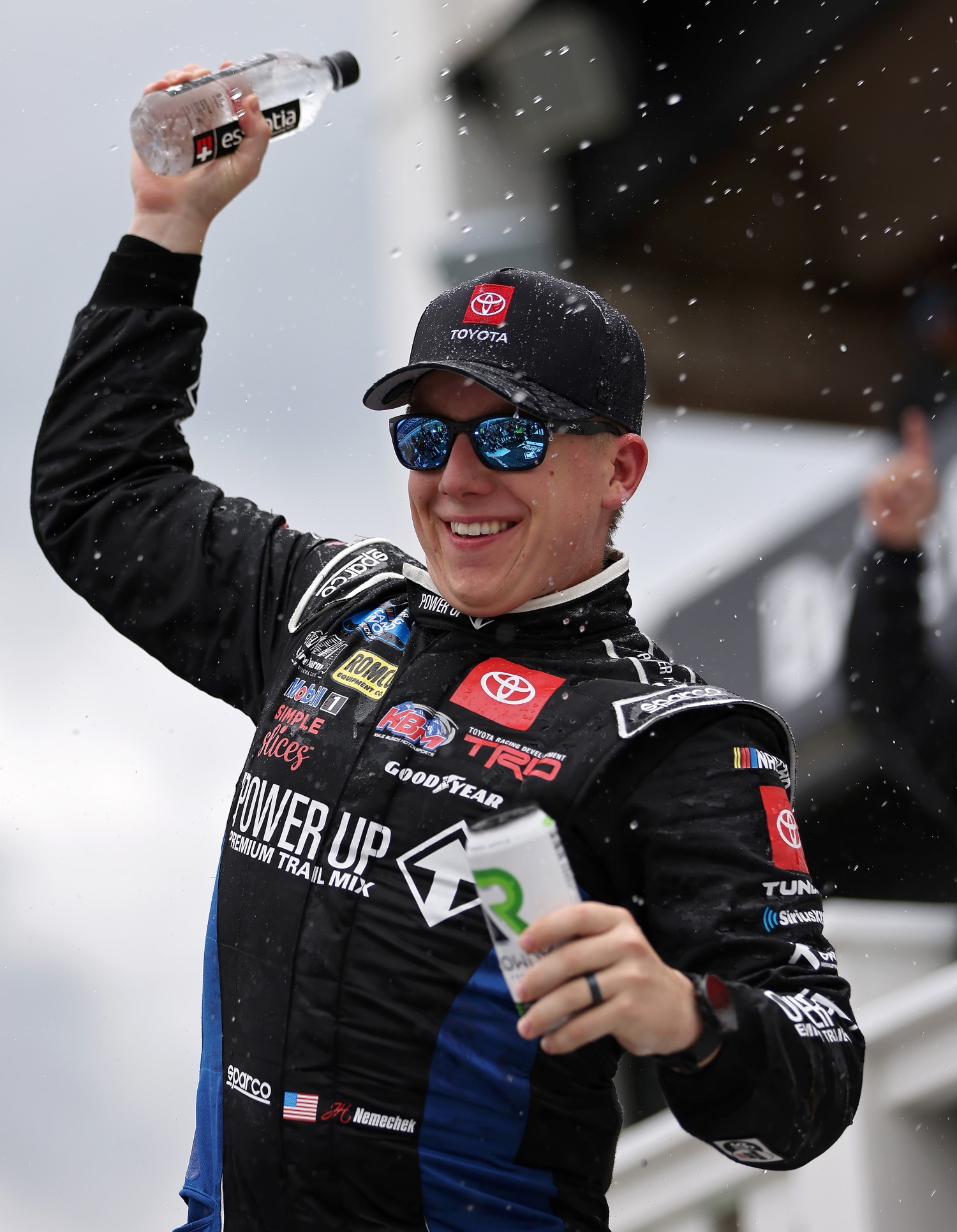 Nemechek crossed the finish line at the 2.5-mile triangular track 1.337 seconds ahead of Busch, who had led 20 straight laps after pitting three laps before the conclusion of Stage 2.

The victory was Nemechek’s series-best fifth of the season and his third in head-to-head competition against his Kyle Busch Motorsports boss.

“These guys just work so hard,” Nemechek said of his team. “We never gave up. We weren’t very good the first stage. Without this opportunity—without Kyle and Toyota, I wouldn’t have had it. Five wins this year and beat Kyle—three for five against Kyle is pretty good odds.”

Busch had a lead of nearly 1.5 seconds over Sheldon Creed when Stewart Friesen’s hard crash into the Turn 1 wall brought out the fourth caution on Lap 51 of 60. Busch chose the top lane for the subsequent restart on Lap 55, with Creed behind him and Nemechek on the inside of the front row.

With a strong push from Todd Gilliland, Nemechek’s No. 4 Toyota barely cleared Busch’s No. 51 in Turn 1 and slid up in front of the team owner.

“The 38 (Gilliland) gave me a big push,” acknowledged Nemechek, who picked up his first victory at Pocono and the 11th of his career. “I got a great restart… and I kind of cleared myself there. (Spotter Tony) Hirschman was still saying ‘Outside, outside’ in the middle of (Turn 1).

“I thought I was clear in my mirror and slid up and took the air away from Kyle. After that, we set sail.”

Busch stayed close to his protégé until Creed powered to the inside of Busch’s Toyota with three laps left. Contact between the trucks ended Busch’s winning chances.

“The Cessna Tundra was pretty good,” said Busch who posted two wins and three runner-up finishes to Nemechek in five Truck Series starts this season. “We were up front there leading, and the caution came out and bunched us all back together.

“We got… not a great restart, but a decent restart. We were all even getting into (Turn) 1, and John Hunter just slid me and got the lead. I was trying to figure out what I could do to fight back and get the lead back, and I got drilled in the left rear. That basically handed the win to the 4 truck.”

Johnny Sauter’s quest to make the postseason suffered a serious below as the field took the green flag to start the race. Jack Wood’s Chevrolet spun out of control after contact from Chandler Smith’s Toyota and knocked Sauter into the outside wall near the start/finish line.

When you got the caution, what was going through you mind?

“We didn’t have enough time there. We were running him down. We definitely had a really fast Power Up Toyota Tundra. Overall, huge shoutout to all of my guys. They never gave up. We weren’t very good in Stage 1. We kept working on it. Just thankful for the opportunity from Toyota, Jack (Irving), Tyler (Gibbs), David Wilson, Kyle (Busch), Samantha (Busch) that put this whole deal together. I’m proud of everyone at KBM (Kyle Busch Motorsports), all of these guys, I feel like I have the best team in the garage and one of the best pit crews as well. How about all of these fans out here. I’ve never seen so many fans and so many campers here at Pocono. It’s really cool to see.”

When you came to Kyle Busch Motorsports, you said you wanted to win the championship. How are you keeping your momentum rolling?

“It really is. We’ve got fast trucks every single week. We struggled at Nashville last week. It was probably one of our worst races and we finished 10th. We just have to continue pushing, continue working. We can’t take these wins for granted. They are hard to get, so hopefully we can get a few more before the year is done, win the regular season championship and have a shot at Phoenix.”

How are you feeling after your fifth win of the season?

“I’m just the lucky one that gets to hold the steering wheel of these fast Toyota Tundras that Eric (Phillips, crew chief) and all of the guys at KBM (Kyle Busch Motorsports) build, the fab shop. There is just so much work that goes into building these trucks each and every week and a lot of paying attention to fine detail, and just continuing to try and make our trucks better each and every week. We had an off week at Nashville last week, so it feels good to come back and have speed from pretty much the first run of the race. We were able to work on it and get it better, and being able to beat Kyle (Busch) this year three out of his five races definitely means a lot to me and our group. I’m proud of the effort with everyone at KBM, Toyota, TRD. Thankful for the opportunity from Jack (Irving), Tyler (Gibbs), David Wilson, everyone at Toyota, Slugger Labbe, and obviously Kyle and Samantha (Busch) and everyone at Kyle Busch Motorsports for believing in me and giving me another shot.”

Walk us through that final restart, and how John Hunter was able to get away?

“I didn’t get the best restart but we were all even going down into the corner. The 2 (Sheldon Creed) truck got off of me a little early pushing me, so I guess he didn’t launch me into the corner. That gave John Hunter (Nemechek) a little bit more to clear me, slide up in front of me, and once he slid me, I couldn’t get back to turn along side of him. We were still going to have a few more laps to try to figure it out and see what we were going to do. We know how fast these KBM (Kyle Busch Motorsports) trucks are and how fast the 4 truck is. It was going to be a high task to get him, but I got drilled in the left rear with a couple to go and was never going to be able to make up that distance and he handed the win to the 4 truck. That was our day, and that was our year, and when all is said and done, we move to ’22.”

What more did you need today?

“Our truck was on the splitter a little bit to start out and we fell back a bit during the first stage. We worked on and got it pretty good. Scott (Zipadelli, crew chief) made some pretty good adjustments to make it a lot better than it was. This race is just so short, you just can’t really do a whole lot throughout the race and if you lose track position, it’s hard to get it back. I thought we had a top-five Toyota Tundra. I don’t know if we could have won the race. I felt like once you got single-filled out, it was just kind of follow the leader. The guy in front of you kind of had to mess up off the corner and you had to get a run on him. It seemed like as people got two-wide down the straightaway, then the guy behind you could suck up and you could go three-wide and clear him before you got to the corner, so it was kind of a frusterating race, how it unfolded, but it’s good to come out of here with a top-five with our Toyotaa Tsusho Tundra, but I’m just frustrated. Top-five is okay, but we need more.”