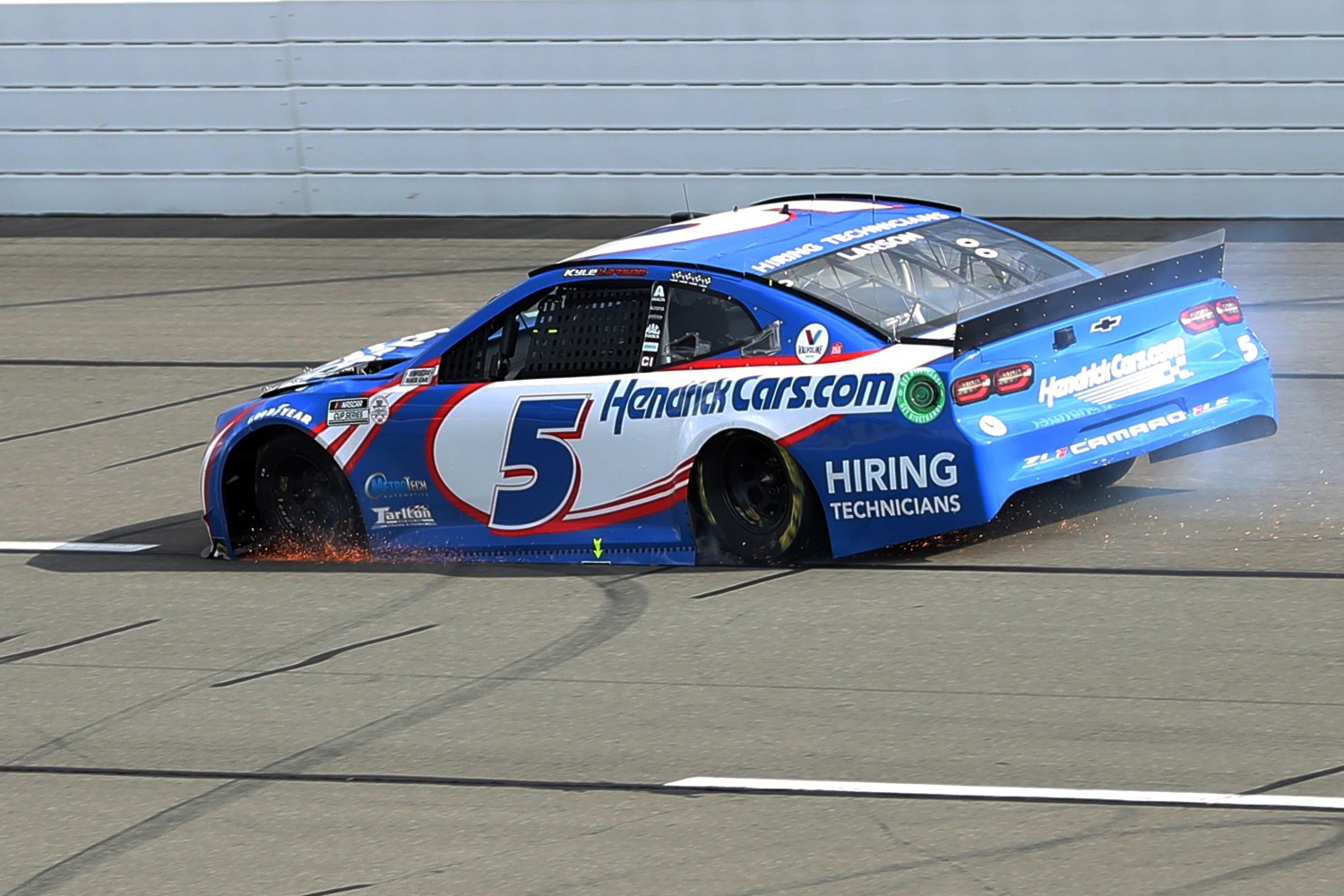 Sometimes it is better to be lucky than good and that certainly was the case Saturday at Pocono Raceway when leader Kyle Larson, gunning for his 5th straight Cup win, had his Goodyear tire blow on the last turn of the last lap sending him into the wall and handing the win to a lucky Alex Bowman.

Bowman netted his third NASCAR Cup Series victory of the season Saturday. Bowman led just 16 of the 130 laps in the No. 48 Hendrick Motorsports Chevrolet. His triumph in the Pocono Organics CBD 325 was his first at the 2.5-mile Pennsylvania track and the fifth of his Cup Series career.

“Yeah, I hate to win one that way, but hell, yeah, I’ll take it,” a shocked Bowman said after climbing from his car. Of course he knows he cannot beat Larson on driving talent, so he’ll take the lucky wins whenever they come.

“Super proud of this Ally 48 team. Man, we kind of gave the lead away. We were on two tires, just got super tight. Tried to hold (Larson) off as long as I could, but I could not.

“(Crew chief) Greg (Ives) and all the guys did a really good job. We didn’t run that good all day, so I’m kind of in shock. I don’t know what to say to you guys. Hell, yeah, so cool to see all the fans out here. Always like to come to ‘PA.’ It’s a cool place, beautiful weather, great day for a race. Heck, yeah, I’ll take it.”

Larson, the best driver in NASCAR, was denied in his bid for a 5th consecutive Cup Series victory (4 plus the All-Star race win). He was one turn away from keeping his streak intact, but a flat right-front Goodyear tire sent him careening into the Turn 3 retaining wall, and he limped home in ninth place.

Chris Buescher finished 20th, meaning he’ll start from the top starting position for Sunday’s Explore the Pocono Mountains 350 (3:30 p.m. ET, NBCSN/NBC Sports App, MRN, SiriusXM NASCAR Radio). The top 20 finishers from Saturday’s race will be inverted for Sunday’s starting grid, which will put Bowman in 20th place for the back end of the doubleheader.

Cole Custer was Saturday’s first retiree, his No. 41 Stewart-Haas Racing Ford sustaining significant damage after contact with Brad Keselowski’s No. 2 Team Penske Ford. After the nudge, Custer bounced off the outside retaining wall on the frontstretch, caroming into the inside wall before coming to rest. Last season’s Sunoco Rookie of the Year was unhurt, but finished last in the 38-car field. He’ll also start last Sunday.

Larson will have to start Sunday’s race from the rear of the field in a backup car. Bowman will start 20th after an inversion of the top 20 finishing positions from Saturday’s race.

Q. Alex, what was your reaction when you saw the 5 going into the wall?

ALEX BOWMAN: Yeah, I hate to win one that way, but hell, yeah, I’ll take it.

Super proud of this Ally 48 team. Man, we kind of gave the lead away. Were on two tires, just got super tight. Tried to hold him off as long as I could.

Greg and all the guys did a really good job. We didn’t run that good all day, so I’m kind of in shock. I don’t know what to say to you guys. Hell, yeah, so cool to see all the fans out here. Always like to come to PA. It’s a cool place day, beautiful weather, great day for a race. Heck, yeah, I’ll take it.

Q. You apologized to your guys. For once you had the luck on your side.

ALEX BOWMAN: Yeah, I don’t know what to think about that. “Bad Luck Bowman” had some luck there (smiling).

No, I mean, the 5 beat us. Their misfortune, it happens. That’s part of the sport. I’ll take it.

Q. You mentioned these fans. How about winning in front of these Pocono fans?

ALEX BOWMAN: Cool. The place is packed. I went for a run in the infield. Typical Pocono, everybody called me William Byron (laughter).

Q. We saw you take a mandatory ride over here, Kyle. Ultimately ninth. That does not tell the story of the day.

KYLE LARSON: I guess disbelief still. I don’t know, a little bit laughable just because I can’t believe it.

Hate that we didn’t get another win. Would have been cool to win five in a row. Just wasn’t meant to be I guess today. Yeah, I felt something like right in the middle of the tunnel. Wasn’t quite sure what it was yet. It finally kind of shredded halfway through the short chute there. Couldn’t turn.

Hate that we didn’t get the win. Cool that Alex still did, a Hendrick car with another win. Cool to keep Mr. H’s streak going.

Yeah, hate we didn’t get HendrickCars.com into Victory Lane, but we’ll try to start another streak tomorrow.

Q. How would you describe all the moves you had to try on him, ultimately getting him? Do you think they abused the tire at all?

KYLE LARSON: No, I mean, I don’t think there were any tire issues all day. I must have just ran something over, I guess. I was having to work really hard to get by him. I was honestly happy to see him get to the lead because I had pulled away from him so much, that run up before the caution. But then he was really fast out front. Just fast enough I could never get to his inside. He was running low enough, I was a little bit choked down.

He was starting to get really tight through one. I was able to kind of use that to my advantage, fake him low a little bit, mess his angle up, get him tighter off of one. Was finally able to get by him. Thought we were going to get the win, but we didn’t.

Q. How anxious are you to re-crank the heater and get that going for tomorrow afternoon?

KYLE LARSON: I guess that’s one thing that’s probably keeping me excited and not depressed, is that we get to go back again tomorrow. I’m sure our backup car will be just as good as that one. Feel like we learned a lot about our car today. The track came to us a lot. I think we should be good tomorrow.