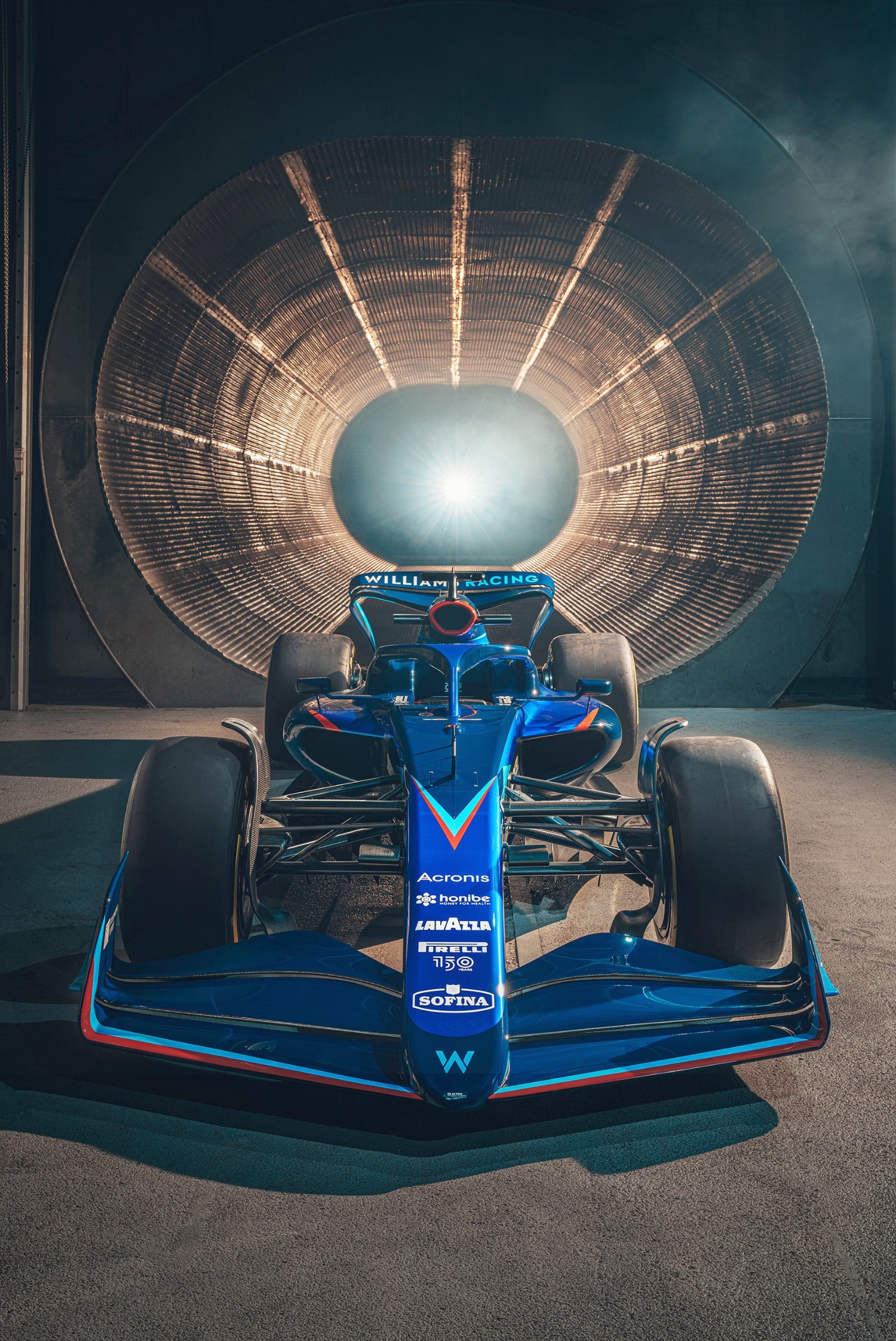 Williams Racing did a fake 2022 car launch today and only unveiled their new livery on the spec F1 show car that will adorn the FW44, the team’s vibrant new challenger for the 2022 FIA Formula One season. The design, featuring a contrasting diamond shape and flashes of red and blue, embodies the exciting new era of the Williams brand, whilst still retaining the classic team spirit.

Designed in line with the 2022 Formula One regulations implemented to encourage closer racing, the FW44 features aerodynamic modifications; including over-wheel winglets and wheel covers, 18” low profile Pirelli tires and rolled tip rear wings. The new identity also sees changes to the front wing and nose, as well as underfloor tunnels that will allow cars to create efficient downforce through ground effect. The 2022 power unit will run on a more sustainable fuel, and the new and improved cars will also have greater safety features.

Jost Capito, CEO & Team Principal: “Over its history as an iconic Formula One team, Williams Racing has shown great strength and sophistication. The new visual identity of the 2022 car perfectly encapsulates these characteristics that the staff, drivers and fans have demonstrated time and time again. As we move into the new era of our sport, the FW44 highlights the transition to the future, as well as acknowledging the timeless qualities that make us who we are. Last season we were thrilled and proud to make such strong advancements as a team, with a number of well-earned points-scoring results in addition to a podium. Looking forward, we want to build on this success, and the FW44 perfectly embodies these ambitions to return to the front of the grid. I look forward to witnessing this progression with Nicholas and Alex at the helm.”

Nicholas Latifi: “I’m a fan of the new livery. Keeping the blue was important as it’s synonymous with Williams Racing, but it’s a pattern we’ve not seen before and the fluorescent red will pop on track which I really like. It’s a fresh new look to start off the new era of F1. I’m super excited for testing in Barcelona, to get back behind the wheel, push and see what the car can do. Pre-season always feels like quite a long time, but it’s been really busy and there’s been a nice build-up at the factory with lots of hard work from everyone. The new regulations should allow for much better racing so I’m excited for the challenge and we will aim to gather some good data from testing, to take us into the first few races.”

Alex Albon: “The FW44 livery is clean and simple. I like that we’ve gone for more blue with the dynamic diamond finish and a little bit of red; it looks really good and I’m looking forward to seeing it out on track. The upcoming Barcelona track session will be about making sure we’re efficient with our time to best ensure we have a competitive package heading into the season. We don’t have many days before our first race and so we quickly need to understand which areas of the car are strong and where we need to make improvements. I’m sure it will be a little bit of a learning curve as we all try to learn how to get the most out of the new regulations, but the objectives and the way that we focus on this car is very much the same as in previous years. Ultimately, we’re all still trying to get a racing car around a track as quickly as possible.”