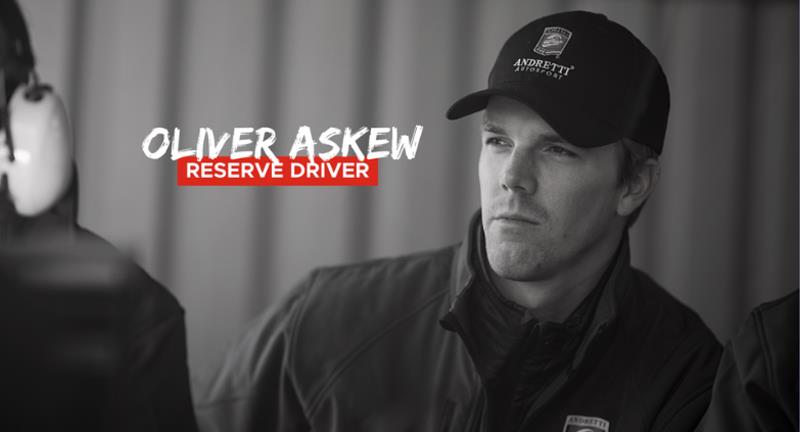 Oliver Askew will be a fixture on the NTT INDYCAR SERIES scene with Andretti Autosport as the official reserve driver.

The reserve driver is a staple position in many European ranks, including Formula E where Askew now competes full time, teams must have a designated test or reserve driver at the ready. To better align across platforms and offer continued growth and opportunity to its global family of drivers, Andretti Autosport is adopting this mindset in its INDYCAR program. In a learned stance, the team wants to arrive at each race as prepared as possible for anything, including unexpected illness.

Askew originally came to Andretti Autosport in 2019, winning the Indy Lights Championship. He rejoined the Andretti team in late 2021 to carry the banner in the ABB FIA Formula E World Championship racing the No. 28 Avalanche Andretti BMW iFE.021.

The Florida-native has proven himself plenty capable behind the wheel of an INDYCAR. In 2020 he competed in 12 races and scored his first podium finish in the series. In 2021 Askew pulled double duty running in both INDYCAR and IMSA scoring a win and five top-five finishes.

However, with Askew committed to Formula E full time there will be a few schedule conflicts. The first comes in the form of the Grand Prix of Long Beach and the Rome E-Prix Sunday, April 10. Askew will miss six INDYCAR races out of the 17-race schedule.

“I’m happy to expand Oliver’s responsibilities within the team and lean into the diversity of our global driver stable,” said Michael Andretti, CEO and Chairman, Andretti Autosport. “He’s proven himself as team player and a consistent driver. We need someone who has experience and feels comfortable if they’re called upon to fill-in for one of our INDYCAR drivers. We know Oliver can take on the challenge though we hope the situation never arises.”

Askew hasn’t lost sight of his INDYCAR dream though a majority of his focus is on the Formula E season.

“It is important to me to help the team wherever I can,” Askew said. “Even though most all of my efforts are put towards the Formula E side, we’re one big family and I want to see the team succeed in each paddock. I look forward to spending more time around the INDYCAR SERIES.”

The NTT INDYCAR SERIES kicks off the 2022 season Sunday, Feb. 27 when the 100-lap Firestone Grand Prix of St. Petersburg goes green. Andretti Autosport has four cars entered in the race and is also represented at the event by four INDY Lights cars. Currently, Andretti Autosport is in the midst of five race seasons including INDYCAR, INDY Lights, Formula E, Extreme E and IMSA.