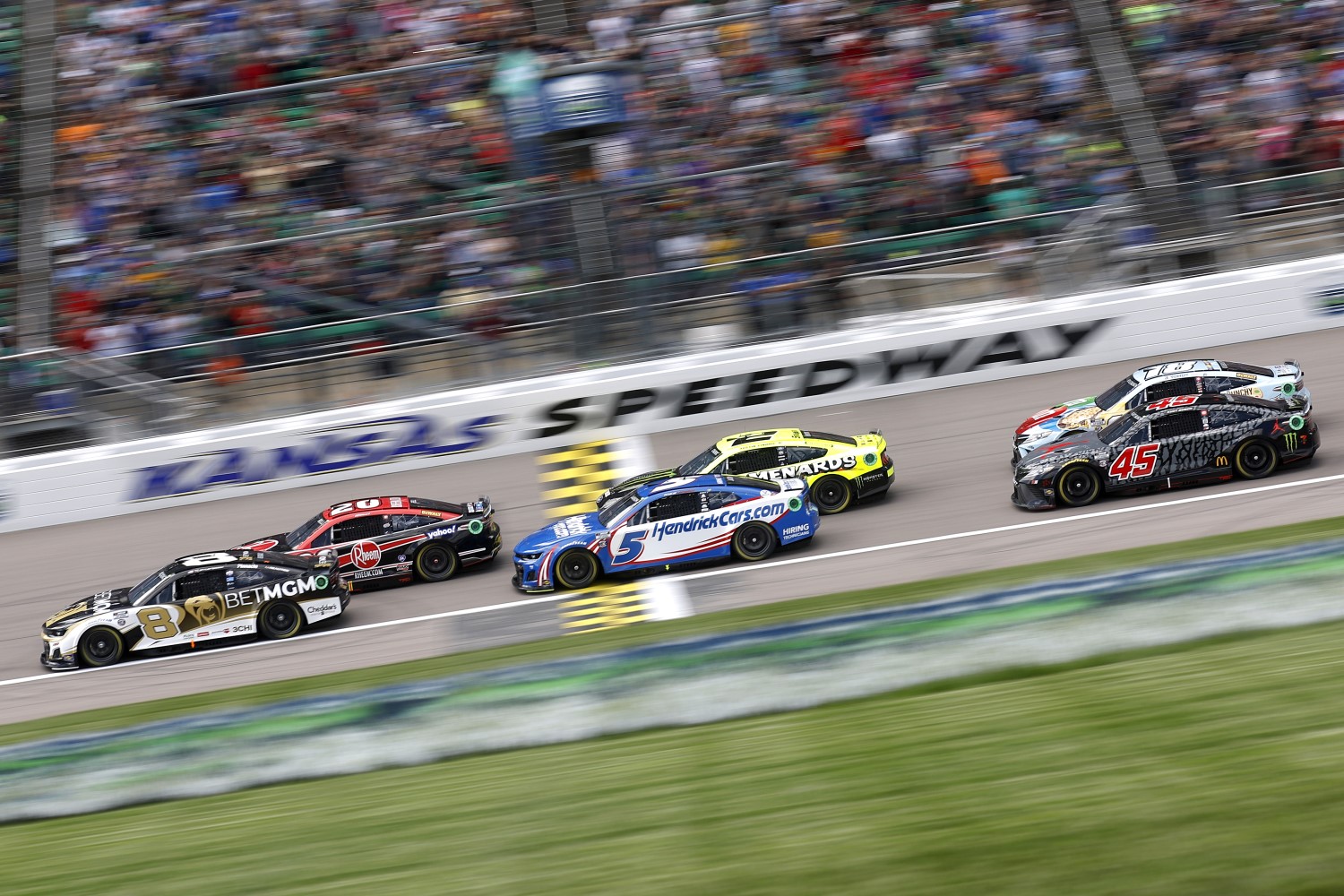 After the final restart with 33 laps to go Kyle Larson was up against 5 Toyotas in his Hendrick Chevy. He beat four of them but Kurt Busch got by Larson’s #5 Chevy with 9 laps to go to win the AdventHealth 400 NASCAR Cup race at Kansas Speedway.

Kyle Busch, who had the lead on the restart finished 3rd in his #18 JGR Toyota followed by three more JGR Toyotas of Denny Hamlin, Christopher Bell and Martin Truex Jr.

Kurt Busch had the dominant car most of the day leading a race high 116 of 267 laps.  It was the first win for the #45 Jordan Brand Toyota Racing team, and it ended Busch’s 27 race losing streak.

Busch’s No. 45 23XI Racing Toyota crossed the finish line 1.413 seconds ahead of Larson to win for the first time at Kansas, the first time this season and the 34th time in his career. Busch has now won NASCAR Series Cup races for five different car owners and with four different manufacturers.

“If I can get one Kyle, I can get both,” said an elated Busch, who passed brother Kyle Busch, the third-place finisher, 11 circuits after a restart on Lap 235.

With 21 laps left Busch began his pursuit of Larson, making up ground as traffic became a factor. On Lap 259 Busch pulled even to the inside of Larson, as the drivers raced side-by-side from the backstretch to the finish line, with Busch inches ahead at the stripe.

Busch widened his advantage through the first two corners of Lap 260 and cleared the No. 5 Chevrolet as Larson brushed the wall near the exit of Turn 2.

“It’s all about teamwork,” Busch said. “I don’t do this alone, and the way that Toyota’s helped us, JGR (Joe Gibbs Racing)… My little brother has been so important, just on the family side of ‘Hey, you’ve got to get through these steps.’

“But this is 23XI. This is our first win with the 45 car, and with Jordan Brand on the hood, I felt like I had to play like the GOAT, race like the GOAT. I had to beat the Kyles. I beat both.”

Larson said his car got tight toward the end of the race but asserted that he and Busch never made contact as they raced side-by-side.

“I wasn’t upset with him or anything,” Larson said of Busch. “It was just hard racing there for the win. I knew when he got to my inside, I was struggling in traffic a little bit and he was able to get by and from there, I just had to hold onto second.

“I just fought really hard today and overdrove it at moments. Just had to work hard for it.”

Up next is the All-Star Race at Texas Motor Speedway (May 22 at 8 p.m. ET on FS1). Kyle Larson won the non-points event last year.

Can you tell me your emotions right now?

“It’s family. When we started this car number, I knew we had our work cut out for us. We just had to do simple things to work our way up. Heck, one of the simple things was just making final round in qualifying. We’ve been starting to do that. That leads you into other categories that help you think and get you into more detail about other things. I just thought all a long if we got up front it would be a whole new game of blocking the air, taking lanes away. Today, this Toyota Camry TRD was fast right off the truck. Stage one I was killer tight. I thought our day was going to be a long day, and I’m just so happy that the car reacted to the changes. Jordan Brand on the hood, that is our DNA at 23XI. Denny Hamlin, thank you. Monster Energy, everybody that is our partners. This is a big win for our team.”

How important was being able to move around today?

“I had my crew do something opposite on a green flag run and I asked them to help me at the end because there are certain check boxes that you can get away with. I knew with (Kyle) Larson – he tried a slide job earlier in the race and his weak spot was turn two. I’m like what – that’s where I’m going to take advantage of him and get the lead back and that is what we did with our Toyota.”

How close to flawless were you this weekend?

“This Next Gen car is far from it. You always have to work, no matter if you are in clean air, dirty air, good pit stops, bad pit stops, adjustments. It taught me a lot today and I’m glad that Kansas – I finally conquered this track. I’ve never won here in all of these years, and I finally get to see Pat Warren in Victory Lane.”

What does this win mean to this team?

“That’s the most gratifying part is to help these guys win. Billy Scott is a great crew chief and it’s a family here at 23XI. I love them.”

SO CLOSE FOR KYLE LARSON TODAY. KYLE, EIGHT LAPS TO GO AND YOU’RE BATTLING SIDE-BY-SIDE WITH KURT (BUSCH). YOU ENDED UP GETTING INTO THE WALL. DID HE GIVE YOU ENOUGH ROOM OR WERE YOU JUST TRYING TO USE EVERYTHING YOU HAD?

“I mean, we were racing for the win there. He never got into me, so I’m trying to squeeze throttle to get position on him and just got tight. That was fun racing with Kurt (Busch). You know, the last half of the race I was trying hard the whole time. I about spun out in front of him there at some point in the third stage and then we just kept fighting through it.

Thanks to my team for building me a war machine. I hit the wall a lot today and just struggled, like people could put air on me and get me really tight and I hit the wall. We’ll work on that and figure it out, but happy with my car. It was hard to hold off Kyle (Busch) and then I knew when Kurt got by, I knew it was going to be really hard to hold him off. I did my best but came up one spot short.”

What happened on that final restart?

“We were in control on that final restart and you want to win the race in that instance, and I felt like our M&M’s Crunchy Cookie Toyota Camry was good enough to do so, but (Kyle) Larson did a good job getting in my left rear in the right spot to drag me back going down the backstretch and I couldn’t retaliate to side draft going into (turn) three, so he beat us right there. Once he got clear it was over. We had a strong Camry. Thanks again to M&M’s, Interstate Batteries, Rowdy Energy, everybody that supports us.”

“It’s huge. I’m so proud of Kurt (Busch) and Bubba (Wallace) as well. Bubba deserved to have a shot at a win today as well. It was so much better than that (tenth). Mistakes, and we are working on it, and that’s something I felt like I’ve let these guys down with is – pit road. It’s just part of it. It’s growing pains, but this is what this team is capable of. I’m happy for Kurt.”

What about your run today?

“Finally. It wasn’t a day – I mean we went to the back three times. I just never could get an opportunity to get up there and show the speed, but once I was there, I just couldn’t get past the aero side of it. We were all a freight train at the top, and that’s all I had. Our Sport Clips Camry was fast. We had to go to the back three times and that is not ideal, but I just want to think about the positives today.”

How was your run today?

“These Camrys are obviously really, really good. I’m really happy to be at Joe Gibbs Racing. This was a long time coming. We’ve had a couple of these races where all of us have been really good, but every car was exceptional today. Our Rheem Camry was really good early, and then when we lost track position, we just kind of lost the balance on it. Whenever we got back up front, it wasn’t quite good enough for the win.”