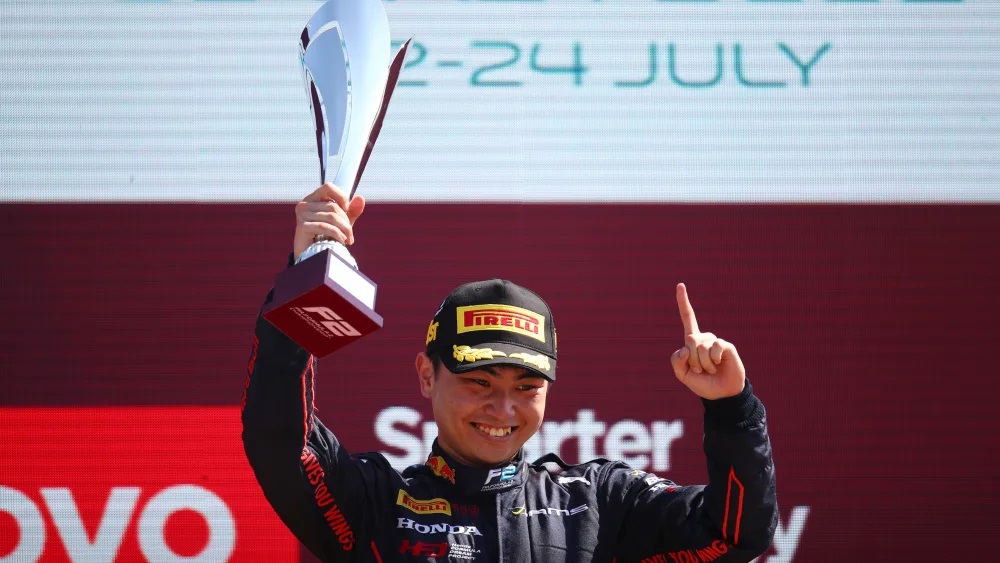 Ayumu Iwasa was cool, calm, and collected as he put in a dominant performance to bring home his first victory in Formula 2 in Le Castellet. Having missed out on a maiden win by the tightest of margins in Silverstone, the DAMS driver refused to let another opportunity pass him by, executing a perfect overtake on the opening lap to pull ahead of his rivals – reaching the checkered flag a comfortable 8.6s seconds clear.

Meanwhile, it was redemption day for Théo Pourchaire. The French driver, who had been demoted off the podium after a penalty in the Sprint Race, brought scenes of celebration to the Circuit Paul Ricard grandstands as he charged his way through from fifth to second. ART Grand Prix topped off their home race weekend with a double podium, as Frederik Vesti converted third on the grid to the third podium of his rookie campaign.

A late charge from Felipe Drugovich on the soft tires saw him secure another strong result in fourth. A mistake by Jack Doohan spelled an end to his podium chances as he was forced to settle for fifth. Sprint Race winner Liam Lawson continued to breathe life back into his 2022 campaign in sixth, ahead of Jehan Daruvala.

Clément Novalak mastered the alternative strategy, stretching the soft Pirelli compound out all the way from Lap 8 to the checkered flag to snatch four points in eighth. Roy Nissany was the biggest climber, finishing in ninth despite a five-second time penalty for leaving the track and gaining an advantage, whilst Enzo Fittipaldi fought back to round out the top 10.

After warmer temperatures played havoc earlier on in the weekend, the field would have been thankful to have been greeted by cooler morning conditions in Le Castellet – allowing the grid to split their strategies. The top five opted to get things underway on the softer compound, but that didn’t help pole sitter Logan Sargeant, who suffered wheel spin off the line and dropped down to third.

There were contrasting fortunes at the front of the pack, as Doohan got a blistering start to streak into the lead in the opening two corners. However, the Australian driver had company in the form of Iwasa, who immediately put him under pressure. Despite the lack of DRS, the Japanese racer had got his tires into the perfect window and used the tow down the Mishal Straight to leap past the blue Virtuosi Racing car up into Turn 6.

Nailing his getaway once again, Pourchaire had his eyes firmly fixed on the front into Turn 1. However, he found his path blocked by teammate Vesti, giving Jüri Vips a chance to sweep past the Sauber Academy junior around the outside of Turn 3 up into fifth.

Further back, Lawson was also making moves as he climbed up two places into seventh on the opening lap. Meanwhile, his fellow New Zealander Marcus Armstrong’s struggles continued. Having already dropped from eighth to 11th, the Hitech Grand Prix driver found himself being sent into a spin after contact with Van Amersfoort Racing’s David Beckmann at Turn 13. PREMA Racing’s Dennis Hauger also got tangled up in the incident.

The Safety Car was swiftly deployed as the marshals picked up both Armstrong and the stricken Virtuosi of Marino Sato, who’s race ended early in the run-off. Thankfully for the hard compound runners, the Safety Car ended at the conclusion of Lap 5 – just on the cusp of the pit stop window.

Firing up his tyres early, Iwasa streaked ahead of Doohan on the restart, as Lawson boldly dived to the inside of Drugovich to take seventh. His fellow Red Bull junior was also feeling brave, as Daruvala put his foot to the floor to go the long way around the outside of Signes to take 10th back from Nissany.

Novalak became the first driver to pit on Lap 7, despite starting on the hard tire. He would have his work cut out for him to take the soft Pirellis to the checkered flag with 22 laps remaining.

Two laps later and Pourchaire became the first of the front-runners to bolt on a set of hard tires from fifth. A clean stop allowed the ART driver to come out in P12, meanwhile Vips’ stop didn’t go according to plan. An issue with the left rear tire sent him tumbling down the order and once he returned to the track, he instantly fell prey to Novalak and Fittipaldi on their warmer tires.

The pit stop was the undoing of Sargeant’s day as well on Lap 13. The Carlin driver was unable to pull away from his pit box and was forced to retire, having looked solidly in the fight for the podium. One lap later and Doohan headed in, attempting to get the undercut on race leader Iwasa, but he was forced to wait for Drugovich to pass before being released. Coming out in eighth sent him straight into Pourchaire’s path and there was nothing the Australian driver could do to defend on cold tires.

The Frenchman’s pace put Iwasa under pressure and to avoid losing too much time, DAMS opted to pit him one lap later and sent him back out in clean air in fourth. Vesti also managed to get the overcut on Pourchaire, but was immediately vulnerable, his ART teammate and Doohan sailing past and up into sixth and seventh, respectively.

Once Daruvala, the last of the drivers to stop, peeled into the pits Iwasa regained the race lead and wasted no time in extending his advantage out front. His efforts were helped by the ongoing duel between Pourchaire and Doohan for second.

Fed up with staring at the ART’s rear wing, Doohan darted up the inside of the chicane on Lap 19. However, his risk failed to pay off with the Virtuosi driver going too deep into the corner and running over the curb, which caused him to lose his rear end and sent him into the path of Pourchaire. The Frenchman managed avoid the Virtuosi, while Doohan lost out to Vesti in the second ART.

In the battle for the final points-paying positions, seventh-placed Nissany was under immense pressure from Richard Verschoor. However, the Trident driver soon found himself under attack as Daruvala lunged down the inside of the Dutchman for eighth before dispatching Nissany the following lap.

Out front, Iwasa’s gap to Pourchaire continued to build with almost a second being added lap by lap. Determined to earn his second podium of the weekend, Drugovich’s soft tyre advantage came into play as he closed to within a second of Doohan. There was nothing the Australian could do as the MP Motorsport driver breezed past him on the run into Turn 7 and the Championship leader set about catching up to Vesti as the final laps ticked down.

Yet there was still heartbreak to come for Verschoor on the final lap. Reporting over the radio that something was on fire, the red, white, and blue Trident came to a halt on the pit straight and his potential P8 finish vanished before his eyes – promoting Fittipaldi into the points. The Charouz racing System driver had begun the day down in 19th.

However, the late drama did nothing to stop Iwasa from storming to his first F2 victory at his team’s home race, ahead of Pourchaire and Vesti, who managed to hold Drugovich off all the way to the finish line – as the local fans were left jubilant at their home hero’s return to the podium.

“Finally, I got P1 in a Feature Race! I’m really, really happy about this. Also, I want to say thank you to my supporters. Also, I’m happy about winning in France because I’m racing for DAMS, so it’s really positive for them.

“The pace was really good, and the car was amazing for me, so I could manage the tyres well. This is really positive for the next event, so I’ll keep pushing to the end to get on the podium and win.”

For the eighth consecutive round, Felipe Drugovich continues to cling on to the top spot in the Drivers’ Championship, with his advantage slightly reduced to 39 points. Théo Pourchaire regains second in the standings courtesy of Logan Sargeant’s early retirement. Jehan Daruvala remains fourth, as Liam Lawson’s revival saw him become one of the biggest climbers of the weekend by breaking back into the top five.

It’s all change at the top of the Teams’ Championship, as ART Grand Prix hop up two places to take the lead, 10 points clear of MP Motorsport. Carlin drop down to third but are firmly ahead of PREMA Racing on 197 points to 161. Hitech Grand Prix round out the top five on 136 points.