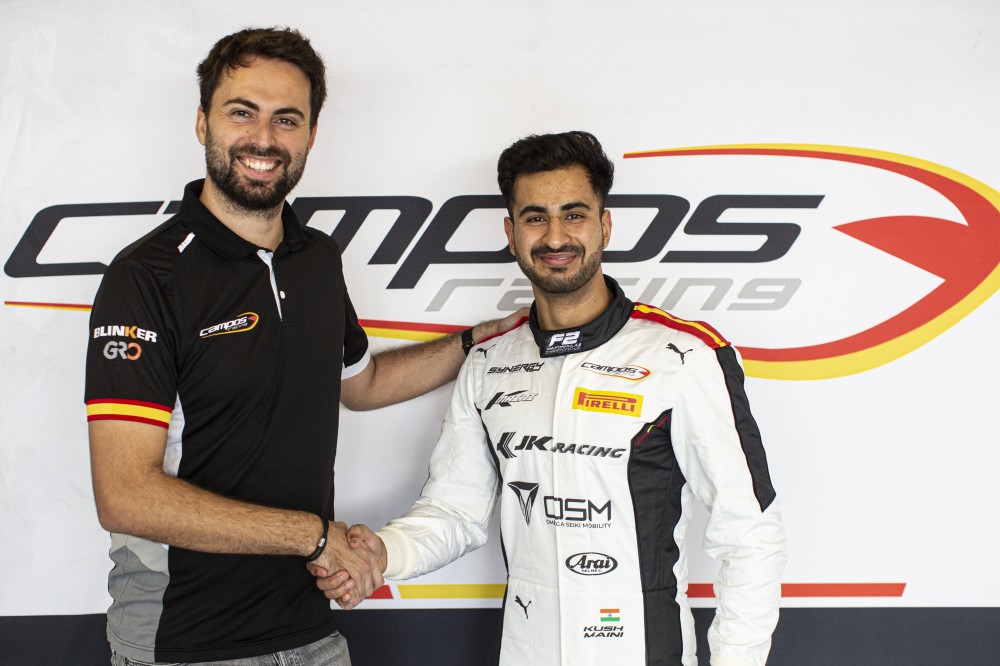 One of seven drivers currently announced for the 2023 FIA Formula 2 season, Campos Racing’s Kush Maini (brother of Arjun Maini) believes his decision to confirm his future drive prior to post-season testing has enabled him to maximize his time in Yas Marina.

The three-day test turned out to be a positive one for the Indian driver, as he learned the intricacies of the F2 machinery for the first time. Finishing four of the six sessions inside the top 10, Maini topped the timing sheets on the final afternoon of running with a 1:36.875, over three-tenths clear of Rafael Villagómez.

Pleased with the progress he has made, Maini says he’s already getting used to the feel of the car and believes it’s more suited to his driving style than the Formula 3 car was.

“From the first session on the first day, I felt really comfortable with the car. The way you drive it is a lot different from F3 and the stuff I was doing in F3 wasn’t necessarily working there, but it’s working here, so that’s why the pace has been really good on the short runs. We’ve always been in the top six, even though it’s testing you can always tell that the pace is there.

“Honestly, I don’t really care about the times, I’m just really satisfied that every time we went out at the same time as the others with new tires, we’ve been in the top five or six. I’m just happy that the pace is there. After you have a tough end to a season, you kind of start doubting yourself, but I’ve come here, and I’ve proved that we are quick, and we deserve to be here.

“Really happy with the team as well, I think we’re all working so well together. I think this is the first time in my racing career that I’ve decided I’m going to do something this early. Even when I decided to do F3, I only started at the official test in Bahrain, so I’d missed out. I’ve got a head start now by four months, so obviously this helps me build my relationship with the team. Then, I think this test has gone amazingly well, so I’m really happy.

“They really, really welcomed me. I went to the workshop and spent three to four weeks there before this test just working, working with my engineer and on the relationships, training hard in the gym. The reason we’re quick in this test is the hard work we’ve put in over the last two to three months.

“Campos has put a lot of trust in me. Even though I was really quick in F3, I haven’t given them a lot of reasons to trust me because it hasn’t gone well in the races, but I’m always confident that on a day you can put me in the same car, I can be competing against the best. This test has boosted my confidence again and the team are really happy with me at the same time. It’s great to go into the winter break on a positive.”

Adapting to a new car doesn’t come without its challenges. After clocking in 232 laps in three days around the Yas Marina circuit, Maini admitted that the physicality of the 755kg car and how that affects the Pirelli tires wasn’t easy to wrap his head around, but that he’s enjoying picking things up quickly.

“The weight – it’s really heavy and the compounds, how differently they react because of the weight. Obviously with some tires, you can’t combine as much as with other tires and in Qualifying when you switch from one compound to the other. It’s just a lot more things like that, but I really enjoy it. It actually gives you less time than in F3 to pick your pace up and I’ve always been quite good being quick straight out of the box.

“The race runs are very tricky in this car. That’s something that took me a bit of time to get used to, so I’ve learned so much in this test and looking forward to next year already.”