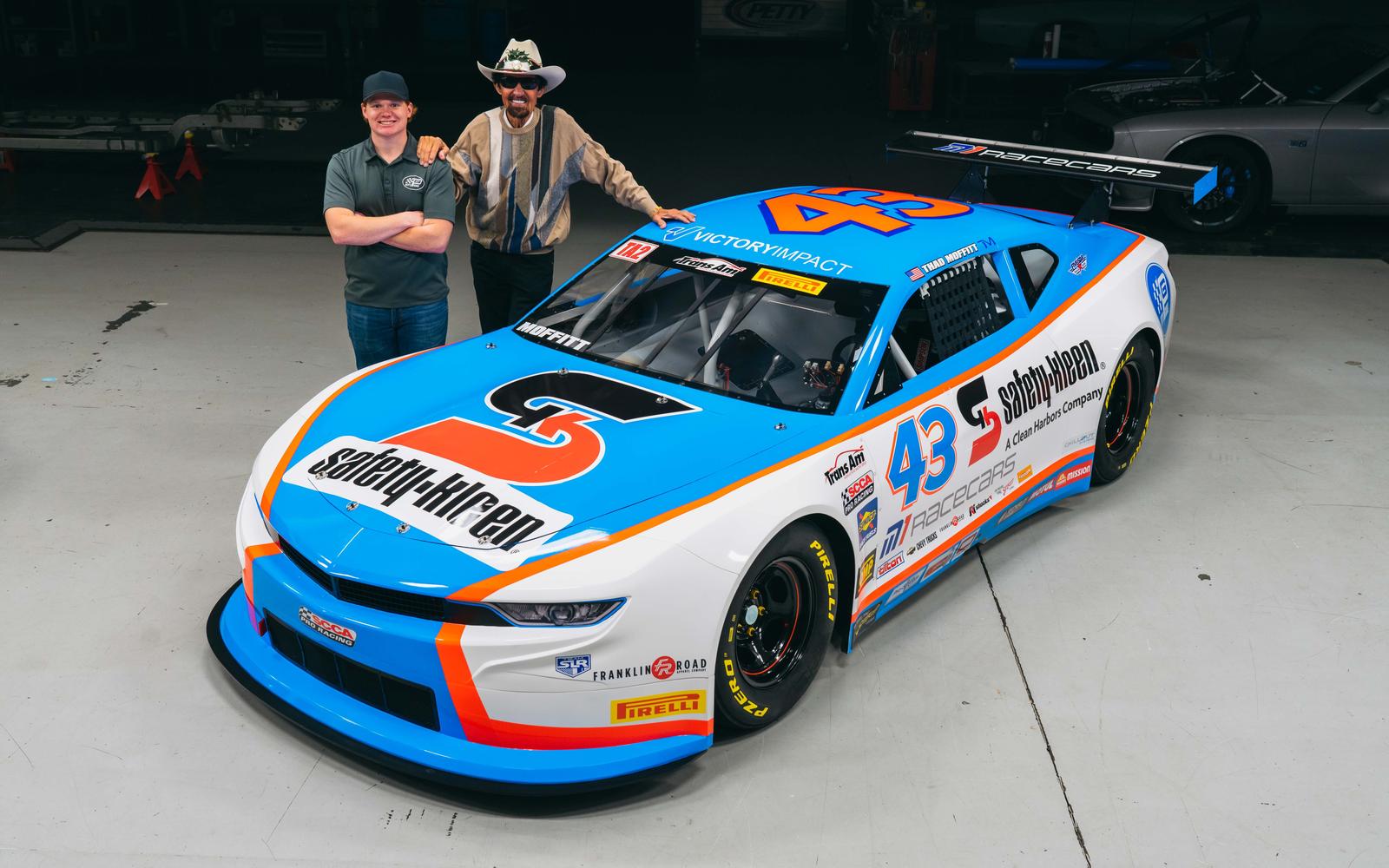 It was announced today at the Performance Racing Industry Trade Show (PRI) that Thad Moffitt, grandson of racing legend Richard Petty, will compete full time in the Trans Am Series presented by Pirelli’s TA2 class in 2023. Moffitt and Trans Am president John Clagett unveiled the No. 43 Safety-Kleen Chevrolet Camaro that Moffitt will pilot in his championship effort for TeamSLR. The Petty blue Chevy from constructor M1 Racecars will run out of TeamSLR’s headquarters in St. Augustine, Florida with support from Petty’s Garage in Randleman, North Carolina.

Moffitt comes to the longest-running professional road racing series in North America following six seasons in the ARCA Menards Series, earning 10 top fives and 29 top-10 finishes in 49 starts between the National, East and West series. In 2022, Moffitt competed in a part-time effort in the NASCAR Camping World Truck Series. The 22-year-old is also the 2016 Southeast Limited Late Model champion.

“I can’t wait to join the Trans Am Series in 2023,” said Moffitt. “The TA2 class is one of the most competitive places to race in all of motorsports, and it will be great to have a chance to race against the huge fields that include champions like Rafa Matos, Mike Skeen and Thomas Merrill. The series races at some of the most historic tracks in the country, with high-profile events like the Music City Grand Prix and Detroit Grand Prix; I am so grateful to have this opportunity.”

Moffitt’s grandfather Petty drove a Plymouth Barracuda for Team Starfish in the fourth ever Trans Am race in history at VIRginia International Raceway in July of 1966, starting fourth and finishing eighth in the Over 2.0 Liter class. With one title under his belt at the time, Petty is now a seven-time champion in the NASCAR Cup Series, having amassed 200 race wins, including seven victories in the Daytona 500. Petty was inducted into the inaugural class of the NASCAR Hall of Fame in 2010, and has been awarded the Presidential Medal of Freedom.

“I am so proud that Thad is going to be running in the Trans Am Series next year,” said Petty. “I think it is a wonderful opportunity for him to drive in such a competitive series and learn road racing. I love that we’re able to bring the No. 43 to Trans Am, and it will be so special to see a member of our family race that Petty blue Camaro. I am very appreciative to Safety-Kleen for helping make this possible through our continued partnership.”

Safety-Kleen, the largest re-refiner of used oil and provider of parts cleaning services in North America, has a long history in motorsports and a long-running relationship with Petty. The company has been involved in NASCAR since 1963, and is an official partner of 145 professional racing teams and provides services at 65 race tracks.

“We are thrilled to have another member of the Petty family race in the Trans Am Series,” said Clagett. “Our series, particularly in the TA2 class, has seen so much growth in recent years, and it’s because of the talented young drivers like Thad joining us. It’s going to be great to see that iconic No. 43 take the green flag in Sebring.”

Moffitt will make his Trans Am debut when the 2023 season kicks off at Sebring (Fla.) International Raceway on February 23-26. To prepare for that debut, Moffitt will participate in the pre-season test at Sebring Jan. 25-26 under the guidance of father-and-son duo Scott Lagasse and Scott Lagasse, Jr. The TeamSLR co-owners have combined to win more than 100 races and seven championships across a variety of series and styles of racecars, from paved ovals to road courses to dirt tracks.

“We’ve been very impressed with Thad’s work ethic and his desire to compete,” said Scott Lagasse, Jr. “TA2 is a great place to learn race craft, and with more and more NASCAR races on road and street courses, it’s an excellent way for drivers to increase their versatility. You can hustle a TA2 car for an entire race, just like qualifying laps. Trans Am is growing and it gets more competitive each year. There are a lot of great racers and it takes a lot to win each race.”