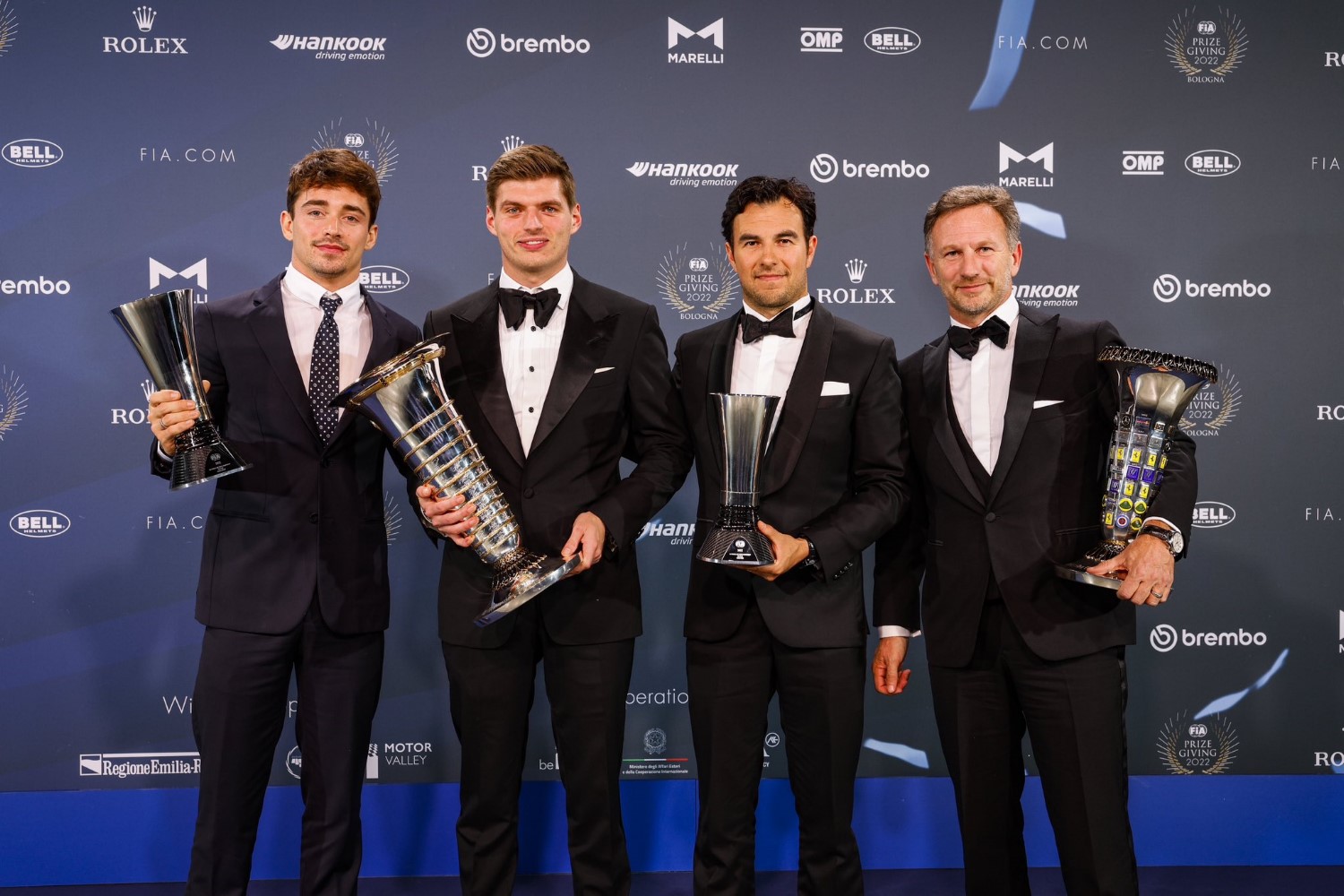 The FIA champions were honored at the annual Prize Giving Ceremony at the Fiera di Bologna in the heart of Italy’s stunning Emilia-Romagna region.

An audience of 1,000 guests celebrated the outstanding performers and performances of 2022 while the personalities and rising stars were lauded and those lost to the motor sport fraternity were remembered. The evening was presided over by MCs Derin Adetosoye, the Formula E presenter, and Eurosport Italia’s Zoran Filicic.

The night celebrated not just the world champions and their teams but also the many people who make the sport what it is.

FIA President Mohammed Ben Sulayem, said: “It is an honor that this 2022 edition, my first as FIA President, takes place in Bologna, at the heart of ‘Motor Valley’. It is a city and a region rich in motor sport and automotive history. My warmest thanks to the Automobile Club d’Italia (ACI), Regione Emilia-Romagna and the Italian Trade Agency for hosting us, and to our partners for their support.

“Tonight, we honor the stars of our sport – our World Champions, and I would also like to thank all the manufacturers, teams and promoters who provide such strong support. Most of all, I would like to thank the thousands of volunteers and marshals who freely dedicate their time to ensure the safety and success of events all over the world.

“This year we have taken significant steps forward on regulations and advanced technology, with the debut of the hybrid-powered Rally 1 category in WRC, a second successful year of the Hypercar category in the FIA World Endurance Championship, the dawn of the electric Rallycross era, the launch of the Formula E Gen3 car and approval by the FIA World Motor Sport Council of the 2026 F1 Power Unit Regulations.

“Across the entire FIA motor sport portfolio, we are promoting environmental sustainability – towards our goal of net-zero by 2030.”

The evening was the crowning moment of a record-breaking season for Formula 1 World Champion Max Verstappen. The Dutchman recorded 15 wins – a new landmark for a single season. He won two of year’s three Sprints and amassed the largest single-season points total (454) in the history of the sport in clinching his second consecutive world title.

Max Verstappen was presented with the 2022 Drivers’ Championship trophy at the FIA Prize Giving gala 🏆 pic.twitter.com/nRe5bOciFo

After receiving the trophy from FIA President Mohammed Ben Sulayem, Verstappen said: “Your whole life you aim for the goal of being a World Champion, but this year we were more competitive and we won the Drivers’ and the Constructors’, so I would say this one is better than last year and more rewarding, but the first one is always more emotional.”

The Constructors’ title, presented by Formula 1 CEO Stefano Domenicali was accepted by Oracle Red Bull Racing’s Team Principal Christian Horner. “For nine years there was only one manufacturer on this trophy. It’s been the most incredible year for the team. We’ve broken every record of our own. Tonight I’d like to dedicate this one to Dietrich Mateschitz.”

Some notable firsts were recognized in the FIA World Rally Championship. The championship celebrated its 50th year and marked the occasion with a switch to hybrid power and 100% fossil-free fuel.

The winning driver Finland’s Kalle Rovanperä, alongside co-driver Jonne Halttunen, became the youngest champion in WRC history – the day after his 22nd birthday. The compatriots accepted their award from Sébastien Loeb. Rovanperä said: “It has been an amazing season, especially getting the first title is always the most difficult one to cope with the pressure. This season was really good for us, with new Rally1 cars and the hybrid system, and we were quick to learn the car and strongly on the pace. We didn’t expect it to happen so soon but we were always pushing, and I don’t think that I’m young when I’m in the car, I just try to do the best possible.”

Sweden’s Johan Kristoffersson collected his fifth FIA World Rallycross Championship in the first season of the category’s all-electric era. “This title definitely means a little bit extra. It’s the first electric championship format this year, which is new for rallycross,” he said. “And also this car we have built ourselves at home with my family team, so to take that car and follow every step and being able to win the championship was definitely something extra.”

The 2019 champion Timmy Hansen took second place ahead of Finland’s Niclas Grönholm. The Teams’ award was presented to Tommy Kristoffersson of Kristoffersson Motorsport.

Belgium’s Stoffel Vandoorne took to the stage to be presented with the ABB FIA Formula E World Championship Drivers’ trophy ahead of Jaguar Racing’s Mitch Evans and ROKIT Venturi Racing’s Edoardo Mortara. Vandoorne said: “It’s not every year you have the opportunity to win a world championship, so I’m obviously very pleased and happy I managed to win this year in the final season for Mercedes as well. With Mercedes EQ we had an incredible journey together and to finish it off with a world championship title is something special.”

Commenting on the closeness of the contest, Buemi said: “We had to fight. It was a pretty short championship, and with the DNF in Spa, it was difficult to recover. From then on, we had to make sure we didn’t make any mistakes, and obviously winning the 24 Hours of Le Mans and Fuji put us back in the championship. At the end we did well. It was good to win the championship again.”

Kamui Kobayashi collected the Manufacturers’ prize on behalf of Toyota Gazoo Racing which won four of the six Hypercar rounds including the Le Mans 24 Hours.

For the second successive year, Alessandro Pier Guidi and James Calado were crowned LMGTE Pro champions and their three wins meant that also for the second year in a row the Manufacturers’ title went to Ferrari. Accepting that award, Antonello Coletta, Head of Ferrari GT Sporting Activities, said:“We’re very happy to finish the 10-year cycle of the LMGTE Pro category with seven Manufacturers’ titles, five Drivers’ titles and four 24 Hours of Le Mans victories. We celebrate all of these and now we concentrate on the future.”

On hand to present the award to the inaugural FIA Rally-Raid world champions – Nasser Al-Attiyah and Matthieu Baumel – was 14-time Dakar Rally winner Stéphane Peterhansel. Al-Attiyah said: “I was the last driver to win the World Cup so my dream was also to win the new cross-country title. After five times doing the World Cup, I really pushed to have the World Rally-Raid Championship title.”

Sébastien Loeb and Fabian Lurquin received the second-place trophy ahead of Yazeed Al-Rajhi and Dirk Von Zitzewitz, while the Manufacturers’ cup went to Toyota Gazoo Racing.

In addition to the confirmation of the Championship titles, a number of other awards were presented.

The FIA Rookie of the Year was selected from drivers who have just completed their first season in an FIA championship. Past winners include Charles Leclerc, Alex Albon and Yuki Tsunoda, while last year’s award went to a driver who will be joining the F1 grid in 2023, Oscar Piastri.

The 2022 recipient, voted by the FIA Drivers’ Commission judging panel, was Zane Maloney from Barbados. Maloney was the 2019 British F4 champion and finished as runner-up in the 2022 FIA Formula 3 Championship. Leclerc was on hand to present the award. “It’s an honor to be standing here next to Charles. I hope I can be as good as him one day,” Maloney said.

Filiberto started his career as a marshal during the Formula 1 era in Mexico from 1986-1992 and has been the Race intervention Chief Marshal for the modern-day iteration of the Mexican Grand Prix since 2015. In 2022, he was a Clerk of the Course.

Filiberto was presented with his award by Abdulaziz Al-Thawadi, the President of the FIA Volunteers and Officials Commission.

With three gold and one silver medal, Italy was the winner of the 2022 FIA Motorsport Games, a trophy accepted on the night by the President of the Automobile Club d’Italia Angelo Sticchi Damiani and KCMG Formula 4 Cup winner Andrea Kimi Antonelli.

In 2022, the prize went to Mercedes AMG Petronas F1 team’s Lewis Hamilton for his stunning overtaking move on Charles Leclerc and Sergio Perez during the British Grand Prix.

From making roads safer through the development of disc brakes or stronger crash structures to the vast improvements in efficiency that we have seen with the hybrid engines of Formula 1, motor sport has always been a driver of positive change.

That mission continues today and to honor the very best advances in motor sport, FIA President Mohammed Ben Sulayem has created the FIA President Innovation Medal. In 2022, the recipient of that award was Gordon Murray for his constant innovative approach to race and road car design.

The FIA Founding Members Club Heritage Cup recognizes the events, the people and the places synonymous with the history of motoring and motorsport. In 1904, the Presidents of seven motoring Clubs met in Germany to consolidate their interest in the automobile and motor sport into an international association, a movement that grew to become the FIA we know today.

Italy was one of the founding members of the FIA, alongside organizations from Germany, Britain, France, Austria, the USA and the Netherlands. Benedetto Camerana accepted the award on his country’s behalf presented by ACI’s Angelo Sticchi Damiani.

The evening concluded with a family photo and a final applause for all of the 2022 champions and category winners as the curtain fell on what has been an eventful motor sport year.