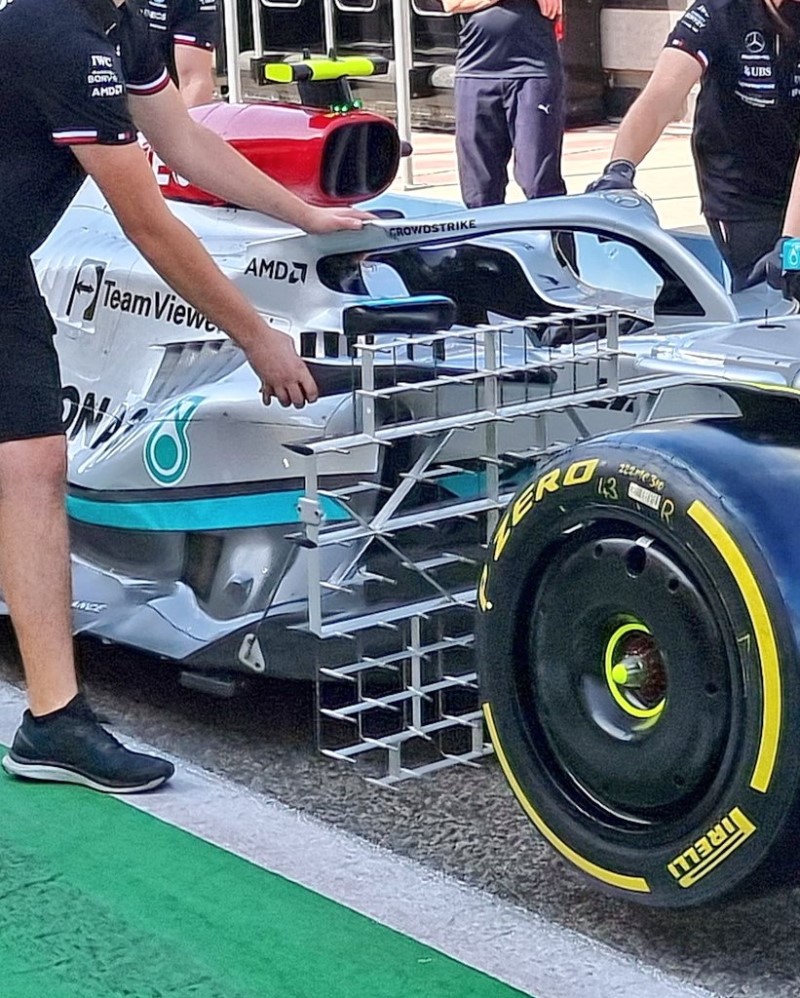 Today, semiconductor chips power everything from switching circuits to allowing electronic devices to function and respond to user commands with precision. As such technologies continue to evolve, so do their use-cases across industries writes Akanksha Sharma/AnalyticsIndiaMag.com

However, perhaps the least known among the use-cases of semiconductor chips is the case of F1 cars. From its design to on-track performance, a grand prix car needs time-intensive research and development to stay competitive year on year. Amidst several components that contribute to the success of this car, semiconductor chips play a critical role in sensors, telemetry units and electronic control units (ECUs).

F1 is perhaps the most data-driven sport in the world at present. The data in these cars is generated from a variety of sources but primarily from the sensors.

More than 250 sensors are typically fitted onto the car during a race weekend, which are further divided into three main categories: control, instrumentation and monitoring. Working in symbiosis, these sensors deliver pressure, temperature, inertial and displacement data along with generating data on measurements of physical quantities (i.e., temperature, pressure, torque, speed) and the operation of the system (i.e., the internal state of the car such as the gearbox). Physically connected through an analog system to the ECU that runs the whole car or through a network of buses, called CAN buses, that bring information back to the ECU, these sensors are embedded into all the systems of the car. 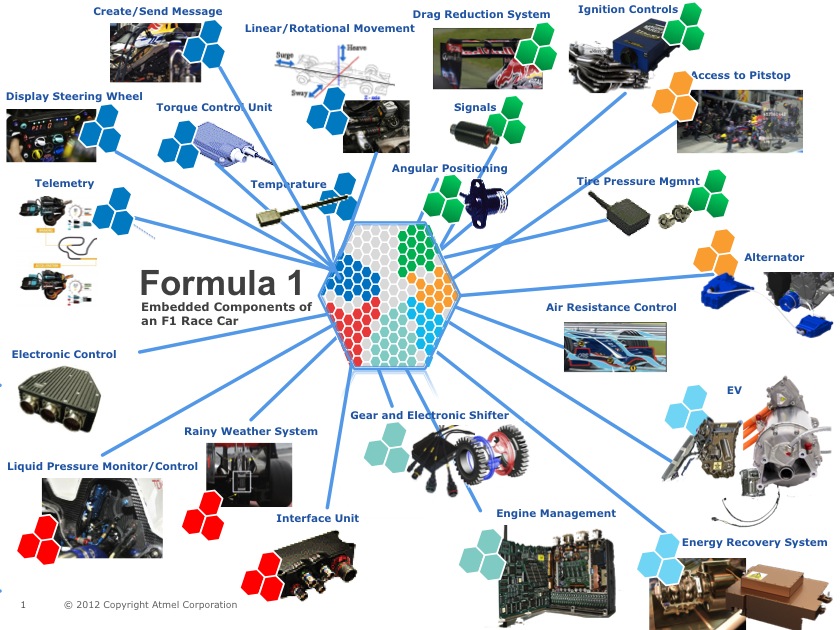 The sizes of the sensors vary according to their function and type. For instance, there is an FIA-mandated TPMS system, which measures tire pressures and is installed inside the wheels. In addition, the car also carries small, thermal-imaging sensors mounted on the wings and floors that measure the surface temperature and the degradation of the front and rear tires. It is important to note that drivers are also treated as points of data when it comes to the performance of an F1 car and wear 3mm sensors sewn into the palm of their glove fabric to monitor and record their vital signs during the race.

Data from every such sensor then helps enhance car performance, formulate race-winning pit stop and tire strategies, and optimize overall on-track drivability for the pilot. 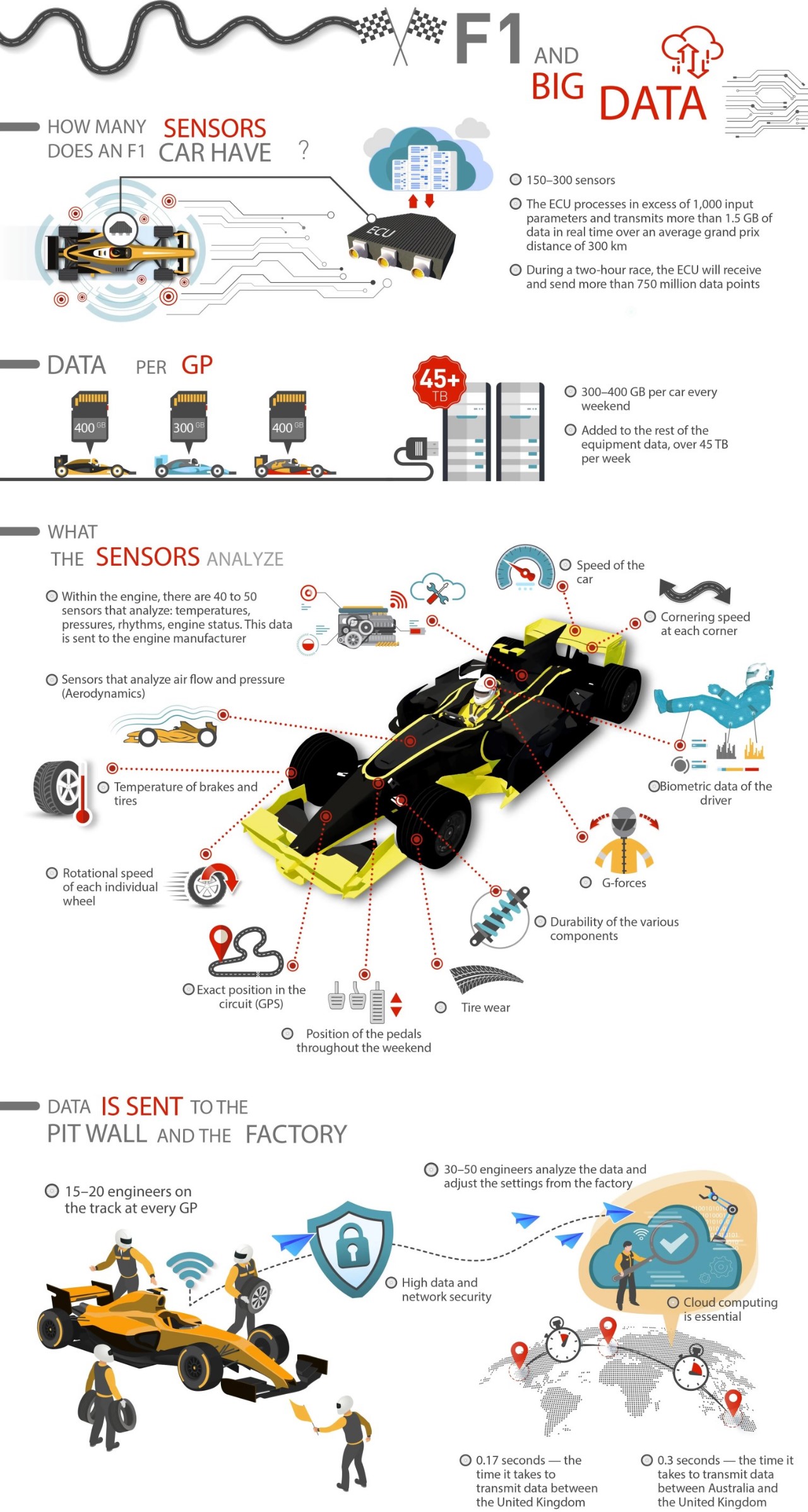 In the duration of two days, a single car produces a terabyte or more of data, which includes ancillary information such as video/media output. However, live data generated by the car while it’s running is nearly 30 megabytes per lap of live data and two~three times more is collected once the car is in the pits/garage and the team offloads the remaining data. On an average race weekend, nearly 11 terabytes of data is generated.

Everything is then synchronized to provide real-time insights into what’s happening at a precise time on each one of the sensors. This data is then encrypted and sent back to the team at the factory through the common telemetry systems for all F1 teams for further analysis.

It is interesting to note that the telemetry system, known as ATLAS (advanced telemetry linked acquisition system) developed by McLaren Electronic Systems (MES), is common to all F1 teams. This implies that—though the data remains encrypted—communication between drivers and their on-track teams can be accessed by rival teams in real-time. In the past, drivers have used this system to bluff about their tire health during the race to throw off rival teams. Mercedes driver and seven-time F1 world champion Lewis Hamilton is especially famous for faking tire problems on track only to put in fastest laps.

From Sensors to On-Track Performance

As the car evolves through the calendar, so do the sensing requirements, and to such an extent that existing technologies often do not suffice. The electronics department for F1 cars therefore develops bespoke sensors and data acquisition systems in-house to provide valuable information that can then be deployed to improve car performance. These updates in the car setup also have a direct impact on the team’s success.

Aside from these self-developed sensors, F1 teams also have strategic partnerships with semiconductor companies such as Qualcomm–Ferrari, AMD–Mercedes, Cadence–McLaren among others to enable experimentation with new solutions on track and help develop a car that stresses the system to its limit.

It is not only what the sensors communicate but the rate at which they communicate this information that makes a difference. The rate of data depends on the type of sensor and the category which can range anywhere from 1hz to 1 kilo hz. These sensors can also be increased significantly if, for instance, the teams are interested in collecting data about vibration which can then be sampled up to 200 kg per second to detect the g forces on drivers.

If one were to juxtapose this gathered data to everyday usage of devices, the amount of video information and data that the teams get out of the car might not be much. However, what matters is that every bit of information in the data stream represents important aspects of car performance which are then closely monitored by the teams back at the factories. For example, Mercedes faced significant aerodynamic issues at the beginning of the 2022 season which they then overcame with the help of the data gathered from the sensors on their cars.

If one were to consider what an F1 car does and how the teams manage their data, the best parallel would be with the mission control for a spacecraft. The modern F1 car is evidently simpler than a spacecraft system but several similar principles apply to both machineries.

Much like the spacecraft, F1 teams monitor a range of complex systems along with the humans who operate them. It is noteworthy that the data link from an F1 car is similar to the data link from a spacecraft in terms of bandwidth. Anecdotally, the amount of data collected by a modern F1 car over the course of a single race is more data than what was collected across the Apollo space program.